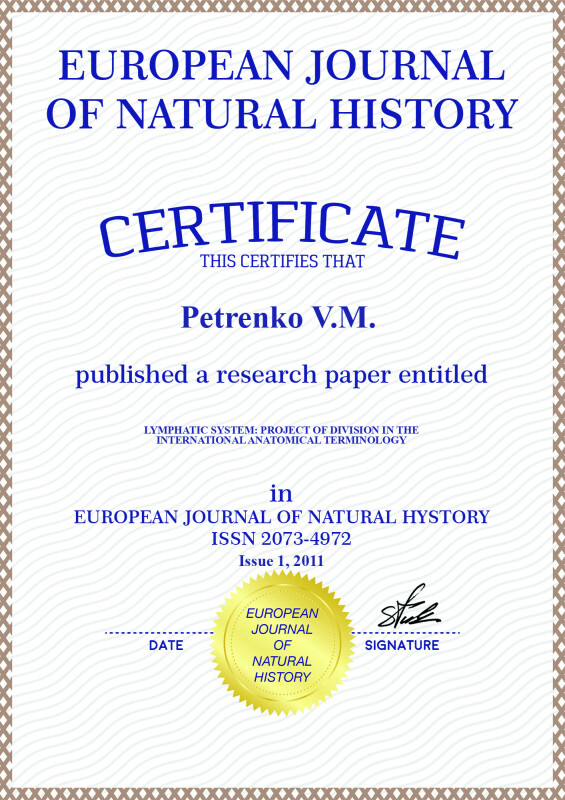 LYMPHATIC SYSTEM: PROJECT OF DIVISION IN THE INTERNATIONAL ANATOMICAL TERMINOLOGY

Lymphatic system plays important role in human life, its structure is studied and described in detail in literature. But in the International Anatomical Terminology (1998) the proper division is absent. I propose the project of such division as addition to the Terminology and is formed on the principles of Terminology. The project consists of three parts - the general terms, the main lymphatic collectors (thoracic duct and right lymphatic duct) and the regional lymphatic paths (on the regions of human body). In the project are included such additional terms, as «lymphatic postcapillary» and «lymphatic vessel unmuscular type», «valvar cylinder», «lymphatic sinuses», «lymphatic trunk», «lymphatic duct» - all these formations have direct concern to organization of lymph flow from organs. In the project are taken into account too:

3) the connections of lymphatic ducts and trunks with cervical veins;

4) regional lymphatic paths (of head and neck, upper and lower limbs, thoracic, abdominal and pelvic), constant and often discovered, including collaterals and plexuses. I put inconstant formations of lymphatic system in brackets.

The work is submitted to the Scientific International Conference «Modern problems Experimental and clinical medicine», (Thailand), 20-28th, February 2011, came to the editorial office on 15.12. 2010.