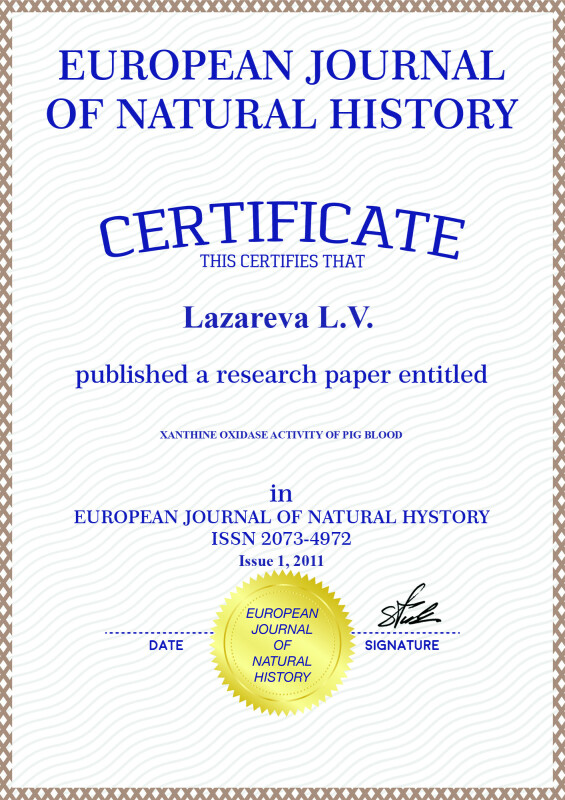 The search for blood tests to predict productive blood traits is a pressing issue. The choice of optimal spectrums of enzymes catalyzing different metabolic reactions is the basis of enzymatic prognostication of animal productivity.

An experiment was carried out on the training farm «Tulinskoye»of Novosibirsk State Agrarian University. Precocious Meat pig breed of Novosibirsk breeding that is well-adapted to local natural and climatic conditions was the object of research.

The animals were selected to be grouped following the principle of analogues with regard to origin, breed, productivity, age and live weight. The pigs were kept following the technology for complexes and farms. Blood to examine was taken from aural vein. Statistical processing of the data was done with the package of applied software Statistica 6 and Excel. The activity of xanthine oxidase in the pigs blood serum was identified. The examined enzyme took part in metabolism of nucleic acids. The influence of the Precocious Meat boars upon the activity of xanthine oxidase in the offspring blood serum was examined. Age variability of the enzyme activity was determined to depend upon restructuring of metabolic processes in different periods of postnatal ontogenesis.

Correlations between the blood enzymatic activity and economically valuable traits of pigs were examined. It was identified that the correlation levels changed during ontogenetic development. In ontogenesis the correlations changed both in strength and direction.

The data obtained testifies to the influence of boar´s genotype upon the level of xanthine oxidase activity in offspring.