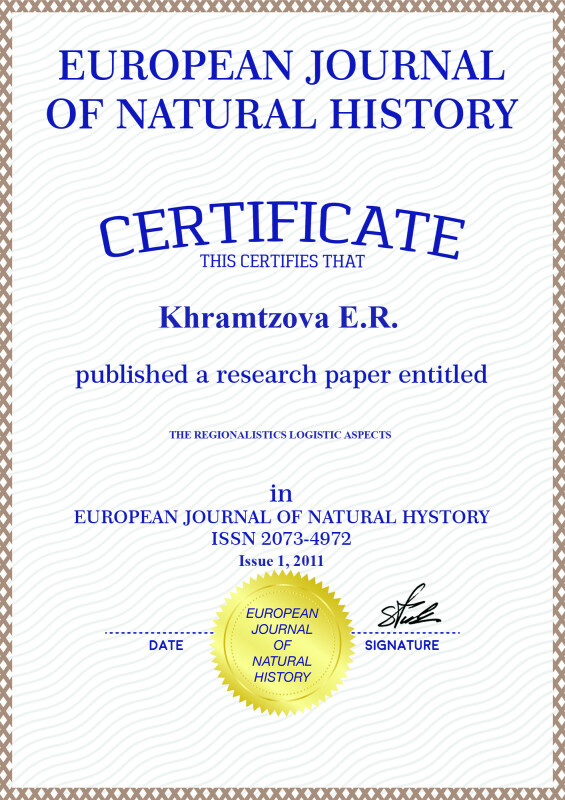 As it is quite known, the logistics has already come into the economy, that it is no mere chance, having appeared and having found sufficiently the wide application, as in the military science and in its business, and some later on, well as in the mathematics. So, the reasons and the premises, and also the prerequisites whole number have already been conditioned by its application the necessity, the reasonability, and also the efficiency in the economy. Thus, on the whole, the logistics has been formed, as the multi-leveled phenomenon, analogically to the economy.

The logistic space stratification has been gone, in our opinion, by the both ways.

Firstly, very soon, the enterprises have been felt the negative influence of the «hostile», and the non - logistic environment, firmly stood on the logistic organization positions, having formed the macrologistic systems. This has been resulted in the tendency, at the beginning, to be involved the nearest, and further, by the possibility, all the partners by their business into the special logistic system, to be widened all its boundaries, and also to be formed the logistic space around them. So, the enterprises and their the nearest partners by their business, jointly having participated in the data - flow processes organization, which are general and the common ones for them, and, having united the main efforts on the management by them, are quite able to be considered the first mezo-systems in the logistics. And the corporations´ logistics has been formed in such a way, having based on the integrity technological and the engineering - functionally unity principle. Then, the logistic chains have been built, which, in their turn, gradually have been lengthened, having included all the new sections and the links, more completely having involved the material flows movement just from the appearance their origin up to their final consumer.

Secondly, the logistics have gradually been pierced through the whole management system, having transformed into the business method, the national economy organization, the economy special ideology, on the whole, having formed macro-logistic space, having roused at the separated business entities level. So, the first network structures have already been given the quite real and the actual examples of the macro-logical systems realization. Then, the macro-logistics has been formed gradually the logistic systems development macro-level has been made up. Thus, the territorial principle has been acted more frequently by the participants´ consolidation integrity basis into the macro-logistic systems.

The logistics development has been resulted in, as to the indications, and the characteristics diffusion strengthening at the macro- and the micro-levels junction, thus, having made up the both multi-leveled polarities. In the result of this, the logistic boundary, the medial sub-level - the mezo-logistics has already been singled out.

So, the mezo-logistics has not been confirmed yet, as in the theory, well as in the practice up to present time, as the independent, the logistics development full of the value. Some economists consider the logistics application field sufficient differentiation upon the macro- and the micro-levels [3. p.9]. However, the boundary, the inter-level logistic space, having singled out more and more distinctly, is being acquired its quite specific indications and the peculiar characteristics, having separated and having stood apart just into the independent field of the existence, and, having demanded the purposeful and the independent study.

At the same time, the logistics development levels division is quite being left the actual challenge. That is why, it is quite possible to be agreed with the Stakhanov V.N., and Shekhovtzev R.V. opinion, who, in their turn, practically, define the boundaries between the multi-level logistic systems, as «the rather conditional ones » [5, pp. 37-38]. For all this, the mezo- and the macro-levels the least are distinctly being differentiated at the present day.

So, it is quite reasonably to be related the data - flow processes management in the network structures just to the mezo-logistics (e.g. it is quite possibly, which are considerably separated territorially), and also the logistic systems functioning, having created by the enterprise with its direct partners by their business for the date - flow processes coordination, at the expense of this, the whole activity efficiency rise. A number of the scientists and the scholars connect the mezo-logistics separation, and also the mezo-logistic systems formation together with the economy corporatization process [2, pp. 53-56;
4, pp. 53-55]. And, in this case, moreover, the territorial affiliation indication has not got the defining value.

At the same time, in our opinion, and the data - flow processes management systems, having formed in the framework of the separate territories (e.g. the towns, the cities, and the regions) will be corresponded to the mezo-logistics. Such kind of these systems are being presented by themselves the complex structures, having included, as the internal, well as the external trade flows, having united by the whole organization unity and the targets integrity.

Thus, the logistics is being developed at the mezo-level in the both principally different and the various development directions: the enterprises group logistics, having united by the technological and the engineering - functionally indications (e.g. the corporative one) and also the territory logistics, in which the territorial education is being acted, as the main organizer and the logistic activity leading participant.

So, the first direction has already been sufficiently proved theoretically, and it has been realized in the practice. The corporative mezo-logistiс systems are successfully being functioned, in the form of the necessary network structures, having worked in the quite different and the various activity spheres: the industry, the trade, the public catering, and the general, personal services, and the domestic service.

The mezo-logistics development second direction (e.g. the territorial one), the regional logistics, almost has not been developed theoretically, and it is being faced much and the considerable difficulties in the practical application. So, as a rule, the priority preservation of the proper, the private interests, having entered into the subjects system, and their unity and the integrity absence is being prevented the mezo-logistic systems creation and their successful functioning just in the territorial aspect. The market relations essence itself is being supplied this kind of the challenge. The joining and the uniting forces and the necessary motivation will have to be sufficiently the powerful and the severe ones, that it is quite especially and problematically for the regional logistic systems, and it is inevitably needed the most active participation in their building and also the state structures and the bodies functioning.

The Regionalistics and Logistics

The logistics space aspect apportionment is being highlighted its defined and the specified generality with the regional economy, which is more known in the West, as the Regional Science (e.g. the Regionalistics) [1].

The Regional Science has been formed in the West, in the middle of the XX-th century. This synthetic direction has been called upon for to be studied the regions, as the integral systems. So, the economy, the geography, the sociology or the social science, the architecture, and the trade are quite able to be the study and the researches scientific field, - the study and the researches general multi-aspect object is being united them all - the region, all they are being acted this united whole summands.

Prokofyeva T.A. and Lopatkin O.M. have justly noted in «The Distributive and Transportly Systems Logistics: the Regional Aspect» [5, p. 44], having studied the regional science and the logistics interconnection, that these both sciences, as the regionalistics, well as the logistics have got the academic interdisciplinary and the intersectoral status, and they are being distinguished by the study and the research object multi-planning. So, these both sciences interconnection scheme has been presented in the Fig.1. If the regions, non - dependently from the studied aspects, are the studies and the researches by the integrated object for the regionalistics, then the economic flows (e.g. the material, the informational, the financial, and the service ones) are being acted, as the integrator and the general multi-planning object of the studies and the researches, and also the influences in the logistics. For all this, their deepening study multi-formity aspects is being defined by the activity those spheres and the areas, in the framework of which all these flows are being existed (e.g. are being functioned).

So, the regional logistics peculiarity and the special feature, as the regional science, on the whole, is its specific territorial direction and the research space aspect exclusive significance.

Accordingly, the characteristics and the peculiarities and the special features study of the every specific region, its place in the more general management system, and also the creating logistic systems and the subsystems space planning has already been become the most important and the most significant regional logistics element.

On the whole, the regional logistics is being directed upon the region economy development, by means the logistic infrastructure creation and its further improvement and the perfection, and also the logistic subsystems formation.

Thus, today, the mezo-level is quite able to be considered, as the micro-systems rise and the development efficiency function, on the one hand, and the macro-systems various and the diverse type base unit formation, on the other hand. So, it is quite just and the true one and also for the regional logistics. The region´s business entities more and more clearly are being needed just in the adequate logistic infrastructure, they are converging more actively to the logistic interaction establishment and the further development with each other. In its turn, the regions promote the macro-logistic systems in the states and the intergovernmental economic formations scales creation and the strengthening, having based their interaction on the logistic principles.

Having come into the economy, the logistics has gradually been formed the both realization levels, having distinguished by their subjective structure, by the mechanisms, and by the participants interaction character, and also by many other main parameters.

The mezo-logistics is being singled out, more and more clearly, which, owing to the force of its medial situation, possesses the dual characteristics, at the macro- and micro-levels junction. On the one hand, this is the enterprises group logistics (e.g. the corporative logistics), on the other hand, - the territories logistics (e.g. the regional logistics).

So, in the contemporary logistics, as the science, exactly, the regional logistics is being presented itself quite the least studied, the developed, and the realized field in the practice. That is why, it is being entered into the complex science - regionalitics by its component part.

If the regions are the study and the research single and the integrated object for the regionalistics, then for the logistics - these are the economic flows (e.g. the material, the informational, the financial, and also the service ones). The regional logistics is called upon for to be studied all these flows in the regional aspect (e.g. as the internal, well as the external ones, towards to the region).

In their turn, the economiс flows are being formed quite in the different and the various activity spheres, having formed the multi-faceted ands the diverse regional logistic subsystems. For all this, the existing multi-fomity and the diversity aspects of their deepened study and the examination are being defined by the region´s economy system development their level and the structure.