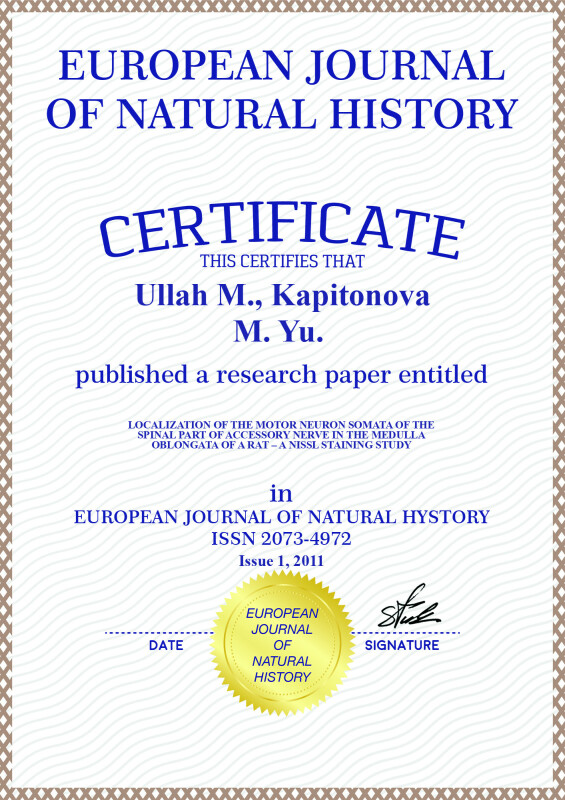 The motor neuron somata of the spinal part of accessory nerve form a group of neuron somata called the spinal nucleus of accessory nerve (SNA, hereafter). The SNA supplies two muscles of the neck, the sternocleidomastoid (SCM) and trapezius (TRAP). The SNA has been investigated in experimental animals by many workers using different techniques. (e.g. retrograde axonal transport of HRP by Ullah et al, 2007, and by Kitamura and Sakai, 1982; retrograde cobalt labeling by Matesz & Szekely, 1983; retrograde transport of fluorescent tracer by Clavenzani et al., 1994; retrograde degeneration technique by Ullah & Salman, 1986). The SNA has also been identified in human embryos by Pearson (1938) and in human cadavers by Routal and Pal (2000) but their works lack experimental support. There are many conflicting views regarding the longitudinal extent and topography of the SNA even in the same species. Flieger (1964) in sheep, Augestine and White (1986) in Japanese baboon, Ueyama et al. (1990) in monkey, Ullah and Salman (1986) in rabbit etc. have localized the SNA in the caudal part of medulla oblongata and upper cervical segments of spinal cord, whereas, Satomi et al. (1985) in cat, Jenny et al. (1988) in monkey, Clavenzani et al. (1994) in sheep etc. have localized the SNA in the upper cervical segments of spinal cord only.

Matesz and Szekely (1983) located the SNA in rat by cobalt labeling (using cobaltic lysine complex solution) and found three longitudinal cell columns containing cobalt labeled neuron somata. They were (1) medial, (2) lateral, and (3) ventral. Their medial column began at the level of pyramidal decussation in medulla oblongata and terminated at C-2, their lateral column was found in the ventrolateral part of ventral grey horn and extended from C-2 to C-6, and according to them, their ventral column was not easily distinguished from the lateral column and was made of thin thread of neuron somata lying ventral to lateral column. Their ventral column also extended from C-2 to C-6.

After an injury of the peripheral nerve (e.g. accessory nerve in the present study) the typical morphological changes in the cell body first recognized by Nissl (1892) include swelling of the cell and the apparent disappearance of basophilic material («Nissl substance») from the cytoplasm. The prominence of the latter phenomenon led to the general application of the term «chromatolysis» for the response to axotomy. However, it has become increasingly clear that the morphological manifestations of this response are different in different cells, and that chromatolysis itself is not invariably seen (Romanes, 1941). Hence the term «axon reaction», «retrograde reaction» or «cell body response» have come to be considered more appropriate to designate the whole range of alterations that may occur (Grafstein, 1975). The characteristics of these alterations have been considered in great detail by Cragg (1970) and Lieberman (1971 and 1974). During chromatolysis, usually there is also a shift of the nucleus from its normal central location in the soma to the peripheral one, but away from the axon hillock. Chromatolysis sets in approximately one day after the injury of the axon and reaches its height within about two weeks (Greep, 1966). The features of the response to axotomy that have been described above are seen to some degree in most neurons with axons that terminate outside the central nervous system. However, in some cases the reaction had been overlooked because it did not have the features of typical chromatolysis. Romanes (1941) produced injuries (crushing, cutting and violent rupture of the nerves) to median, ulnar, radial and musculocutaneous nerves in rabbit. He found that after a postoperative survival period of 7 to 21 days, none of the cells in the cervical region of spinal cord displayed the typical reaction which has been designated chromatolysis. He also found that some of the cells on the operated side showed an arrangement of Nissl substance which was not visible on the unoperated side, consisting of a grouping of the Nissl substance as a more homogenous ring around the centrally placed nucleus with a clearer zone of cytoplasm between this and the cell membrane; the Nissl substance was absent in the dendrites. However, de Neef (1901) found in the same animal (rabbit) that anything but violent rupture of the nerves, was ineffectual in producing chromatolysis. Van Gehuchten (1900), Bucy, (1928), Geist (1933) and many others also did not find the classical reaction (chromatolysis) in the cell body of ventral grey horn neurons after peripheral nerve trauma. In spite of this chromatolysis is frequently used as an experimental method for determining localization in the spinal cord (Romanes, 1946).

Ten Sprague-Dawley rats (6 males, 4 females) were used in the study. Under general anaesthesia (30 mg per Kg Nembutal sodium solution, intraperitoneally) and aseptic conditions, the trunk of the right accessory nerve (before it supplies the SCM and TRAP muscles) was exposed in the neck and a portion removed to prevent re-union. After 21 to 28 days of post-operative survival, the animals were killed, their circulation flushed with normal saline and perfused with 10 % formal-saline at a pressure of 120 mm Hg. After perfusion, the medulla oblongata was removed by a dorsal approach, embedded in paraffin wax and its serial transverse sections cut at a thickness of 40 micrometers. The sections were mounted on slides and stained with thionine. The sections were examined microscopically to identify the chromatolysed neuron somata and to compare the experimental right side with the control left side.

The chromatolysed neuron somata (representing the SNA) were found to form a small group of neuron somata located in the caudal part (caudal 0,9 to 1,2 mm) of medulla oblongata at a site immediately ventrolateral to the pyramidal fibres (that were passing dorsolaterally after their decussation).

There is disagreement among many investigators regarding the longitudinal extent of the SNA in various species of mammals. It has been located in the caudal part of medulla oblongata and upper cervical segments by Flieger (1964) in sheep, (1966) in horse, (1967) in cow, Matesz and Szekely (1983) in rat, Ullah and Salman (1986) in rabbit, Augustine and White (1986) in Savanna baboon, Ueyama et al. (1990) in Japanese monkey and Routal and Pal (2000) in human cadaver. The results of the present study are in agreement with the above investigators because in the present study also the SNA was found to be located in the caudal part of medulla oblongata.

The work is submitted to the Scientific International Conference «Modern problems of experimental and clinical medicine modern formation. Problems and solutions of a problem of agriculture economy and management theoretical and applied sociological, politological and marketing researches», (Thailand), 20-30 December, 2010, came to the editorial office оn 14.11.2010