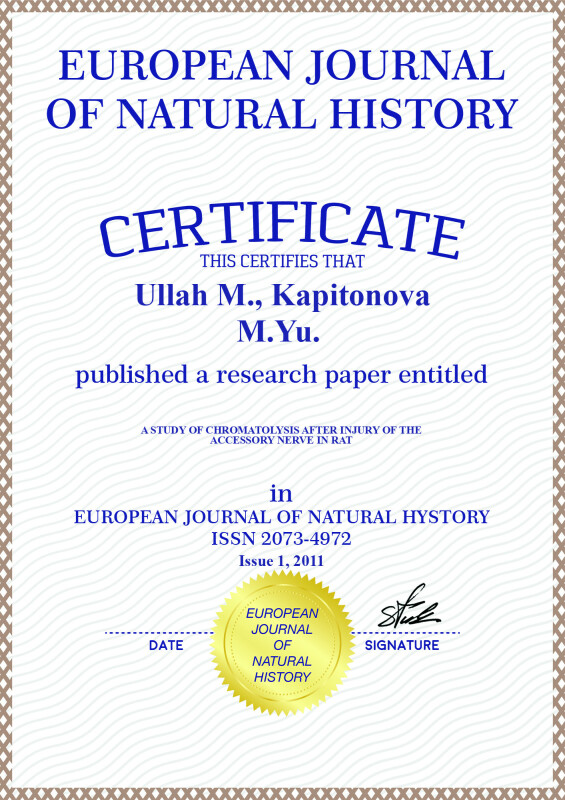 Ten Sprague-Dawley rats (6 males, 4 females) were used in the study. Under general anaesthesia (30 mg per Kg Nembutal sodium, intraperitoneally) and aseptic conditions, the trunk of the right accessory nerve (before it supplies the sternocleidomastoid and trapezius muscles) was exposed in the neck and a portion removed to prevent re-union. After 21 to 28 days of post-operative survival, the animals were killed, their circulation flushed with normal saline and perfused with 10 % formal-saline at a pressure of 120 mm Hg. After perfusion, the medulla oblongata and the 1st, 2nd, 3rd, 4th, 5th and 6th cervical segments of spinal cord were removed by a dorsal approach, separated from each other, embedded in paraffin wax and their serial transverse sections cut at a thickness of 40 micrometers. The sections were mounted on slides and stained with thionine. On the operated (right) side, a varying number of neuron somata of the ventral grey horn showed certain retrograde changes (or cell body response). No retrograde changes were observed in the neuron somata on the left (control) side. The retrograde changes (cell body response) shown by these neuron somata were of the following two types:

a) Neuron somata with typical chromatolysis. These somata showed dispersion of Nissl bodies and loss of affinity for stain (thionine). The cell often appeared more round than usual apparently because of some swelling. They had peripheral (eccentric) nucleus. Their nucleoli were either central or eccentric. From 15,42 per cent to 30,21 per cent of somata with cell body response were found to show typical chromatolysis.

b) Neuron somata with retrograde changes (cell body response) but without a typical chromatolysis. In these somata, there was a grouping of the Nissl substance as a more homogenous ring around the centrally placed nucleus with a clearer zone of cytoplasm between this and the cell membrane. Nissl substance was absent in their dendrites. From 69,79 per cent to 84,58 per cent of somata with cell body response were found to be of this type.

The work is submitted to the Scientific International Conference «Modern problems of experimental and clinical medicine modern formation. Problems and solutions of a problem of agriculture economy and management theoretical and applied sociological, politological and marketing researches», (Thailand), 20-30 December, 2010, came to the editorial office оn 22.11.2010.