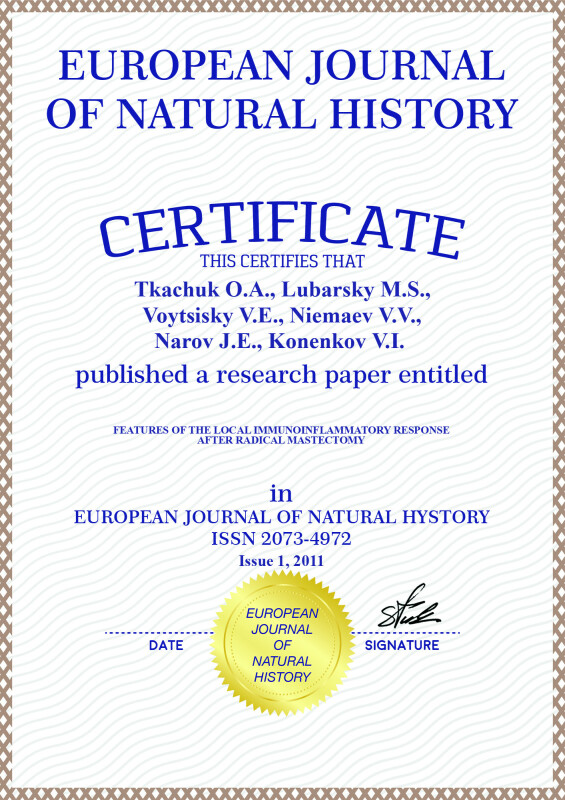 FEATURES OF THE LOCAL IMMUNOINFLAMMATORY RESPONSE AFTER RADICAL MASTECTOMY

Breast cancer ranked the first place in the structure of cancer pathology in women. The immediate postoperative complications of surgical benefits arising from an average of 75 % of cases, prolong the postoperative period, require a substantial voltage defenses, put off the dates of other components of comprehensive treatment, which adversely affects overall survival.

The levels of cytokines IL-2, IL-6, lactoferrin (LF), IL-8, AAB to AH lmDNA in blood and wound discharge has been determined in 52 patients before surgery, 1 st and 7th postoperative day after radical mastectomy for investigation of the immunoinflammatory response. The study was performed using test systems produced by «Protein contour» Saint-Petersburg on the manufacturer´s instructions. Results of enzyme linked immunosorment assay were recorded on a vertical Multiskan photometer MSS 340 at a wavelength of 492 nm.

The study have been showed the significant increase in the concentrations of IL-2, IL-6, lactoferrin, and the trend toward increased levels of IL-8 and AAB to AH lmDNA in serum in the early postoperative days. The obtained data have been revealed the activation of destructive inflammatory process in women after radical mastectomy. The content in wound discharge IL-2 was significantly higher than its concentration in the blood serum in 4,25-fold, IL-6 in 4,7 times, IL-8 in 3,75 times and lactoferrin in 4,8 times. We concluded the greater severity of local manifestations destuktivno - immune - inflammatory process in women surveyed in the first day after surgery. Data correlation analysis have been revealed a relationship between IL-6 (r = 0,63; p < 0,05); IL-8 (r = 0,45; p < 0,05); AAB to AH lmDNA (r = 0,48; p < 0,05) in blood serum and lymph. It demonstrates the relationship of destructive - immuno - inflammation at the systemic and local levels.

The reduction of biologically active substances with pro-inflammatory properties (IL-6, IL-8, LF) on the seventh day after surgery have been proved a significant decrease in activity of the emergence of local and systemic inflammation. The indirect sign of the activity of destructive inflammatory process is significantly higher concentrations of markers of cell destruction AAB to AH lmDNA in the serum of patients in 7 day after surgery.

The work is submitted to the International Scientific Conference «Modern problems of experimental and clinical medicine modern formation», (Thailand), 20-30 December, 2010, came to the editorial office оn 22.11.2010.