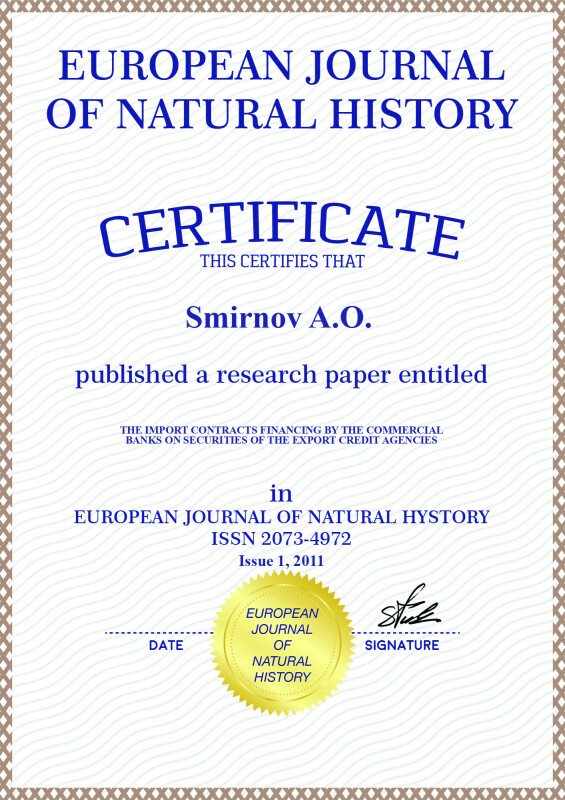 The contemporary stage of the Russian banking sector and its industry development, and also the world´s credit and financially integration processes activization, are constantly being made the special great and the high demands to the banking management, for the purpose of its activity results high - level efficiency provision, including the international bank transactions carrying out sphere.

The Russian management subjects´ external economic relations development is being characterized by the trade export - import relations volumes rise dynamics. So, the Russian foreign - trade turnover volume has been raised up in 1,4 time, and it has been made up 1,203 bln. dollars, for the period of the 2008-2009-es. So, the import and the export growth rates have been made up 10-15 % for the quarter of the year that is being conditioned by the Russian various organizations international contracts number growth with the foreign partners and also by the Russian external economic relations development.

The efficient and the reliable instruments role of the international accounts and the settlements is quite being increased, and also the banks´ role in their realization, under all these conditions. For all this, the commercial banks are being acted, as the mediators, the guarantors, and the subjects´ calculations and the transactions in the Russian various organizations international trade realization with the foreign contractors.

The banks are becoming more increasingly difficult to be worked in the foreign trade financing field, in the connection of the liquidity crisis. So, the borrowed means, having received from abroad by the Russian various credit organizations, the credit institutions, and the lending agencies especially for this business further development, because of the capital markets world - wide crisis, are being become more increasingly difficult and much expensive to be attracted them. The margin rate, having installed on the credits by the foreign banks, which is being lent out to the Russian banks, has been increased for the 3-6 % annual one towards the end of the 2010 year, in comparison with the 2009 year. In the term of the foreign trade financing, it is being noted the special tendency to the corresponding subdivisions creation, having carried out the trade financing operations, not only in the big, but in the average banks, and also in the small banks, which are not being entered into the top - 100 the Russian financial Institutions. The big import contracts financing challenge has been more become considerable towards the end of the 2010 year.

In the connection with this, the importers are constantly bringing the increased and the keen demand for the economically financial schemes, which are much profitable for them. So, there is one from these variants - the credit drawing up on the securities of the Export Credit Agencies.

So, the special organizations are being existed in many well - developed countries, having helped the national producers and the manufactures to be sold their final production in abroad - the Export Credit Agencies (ECA). These are the authorized bodies, which are frequently the state financial Institutions, having extended the credits, the guarantees, or the insurance to the exporters. In the overwhelming majority cases, ECA are usually specialized in the goods deliveries, in the services, in the equipment to the countries with the developing economy.

The bank, having worked with the Export Credit Agencies, is being given the quite serious competitive advantages at the Russian market, because it has the quite real possibility to be issued the prolonged, the long - termed and the cheap, the low - interest credits for the industrial equipment import to the various enterprises.

The Organization of the Economic Cooperation and Development (OECD) members - countries Agencies are usually insured the export contracts, having financed by the credit with the repayment period, which is made up the two years (e.g. 24 months) and even more. So, afterwards, the OECD countries have sighed the Agreement, in which the export credits, having supported by the state, work is being regulated - the OECD Consensus. So, the main demands to the insured contracts have been formed and completely fixed, including in it.

Firstly, the credit, having declared to the insurance, is quite able to be made up not more, than 85 % of the contract value that is the contract conditions must be provided the 15-th per cent prepayment.

Secondly, the credit and the per cents on it must be repaid by the equal portions and the parts with the intervals no more, than the six months period (e.g. a half of the year), where the first portion and the part will have to be paid in time, not having exceeded the six months period, since the credit repayment commencement. So, the ECA working schemes are quite able to be considerably differed. The credit is quite able to be extended to, in the form of the installment payment by the producer and the manufacturer themselves, on the ECA securities. So, the quite another scheme more and more is being used with the various Russian companies, in which, without fail, the Russian bank has been included in it. Then, the Russian impor-
ter - company is addressed to its bank for the contract financing organization. The Russian bank is checking the enterprise financial performance, the guarantee and the security offer levels, it is taking the borrower function upon itself from the Western bank on the ECA security, in its turn, having given the credit to the importer. The customer pays for not less 15 % of the equipment value from its own funds, and the financing Western bank opens the irrevocable letter of the credit (L/C) in favor of the exporter. After the letter of the credit (L/C) opening, the exporter is being given the payment by the contract, and the importer begins to be repaid the credit.

So, the scheme main details are quite able to be changed - for example, the big companies are quite able to be addressed directly for the credit to the Western banks. Or (usually - at the brief or the short - termed contacts) the exporter issues the trade credit to the importer, and the bank is only being guaranteed the obligations performance by the importer, whereas the ECA insures practically the whole deal.

Thus, the Russian importer main crediting stages with the ECA insurance coverage application are the following:

2. Preliminarily, the exporter and the first - class foreign bank are being addressed into the ECA for the export credit insurance.

3. The first - class foreign bank and the Russian bank are being concluded the Basic credit contract between themselves and also the Separate credit contract within its frameworks (e.g. having provided this contract financing).

4. The advance payment is being performed by the importer.

5. The ECA is being provided the guarantee.

7. The exporter is being produced the goods shipment.

8. The exporter is being provided all the necessary documents to the first - class foreign bank, having provided by the letter of the credit (L/C) conditions.

9. The first - class foreign bank is being checked all the necessary documents, and also it is being paid for them, in accordance with the letter of the credit (L/C) conditions (e.g. up to 85 % from the contract total amount).

10. The first - class foreign bank is being addressed the notice on the payment date and on the financing conditions, and also it is being addressed all the necessary documents by the letter of the credit (L/C) for the allocation them for the importer. Afterwards, the Russian bank is being received its obligations extinction delay before the first - class foreign bank up to the 84 months (e.g. the 7 years).

11. The importer is being received its obligations extinction delay before the Russian bank up to the 84 months (e.g. the 7 years).

So, the import financing scheme is the most attractive one for the Russian importers, as the discount interest rate by the external credit is considerably profitable, than the Russian interest rates by the rouble credits. The payments in the credit repayment for the complex, having needed the assembly, equipment are began to be enumerated and afterwards to be transferred, as a rule, only through the half of the year (e.g. 180 days), since its successful introduction into the exploitation: a number of all the necessary documents provision by the exporter provision is being served, as the letter of the credit (L/C) opening condition, among which, ‒ there is the transfer act deed, which is usually made up just after the equipment assembly and its checking up. So, the payments by the credit are being performed by the equal portions and the equal parts once in the half of the year (e.g. 180 days). It is meant, that the borrower has not to be paid for the equipment in advance: it is began to be worked, and the credit repayment is being produced partially or completely, and already for the impact account from the capital investments.

So, it is quite possible to be related to the Western financing advantages of the import contracts on the ECA securities, which are the following:

- the rates are below, than the crediting Russian market rates level;

- the credit repayment prolonged terms, the delay in the principal debt payment up to the 6 months (e.g. the 180 days);

- the debt part repayment possibility from the means, having formed, in the result of the project realization, at the expense of the borrowing prolonged term;

- the payments by the letter of the credit (L/C) with the means immediate reimbursement to the exporter, at the expense of the Western bank resources.

Thus, the import contracts financing, on the export agencies securities, has been given the wide - scale spread, owing to the fact, that it has been taken into the consideration all the sides interests, and also it is the convenient and the profitable one for all the participants of the export - import deal.

The work is submitted to the International Scientific Conference «Priorities for Science, Technology and Innovation», (Egypt), 15-22 August, 2010, came to the editorial office оn 04.08.2010.