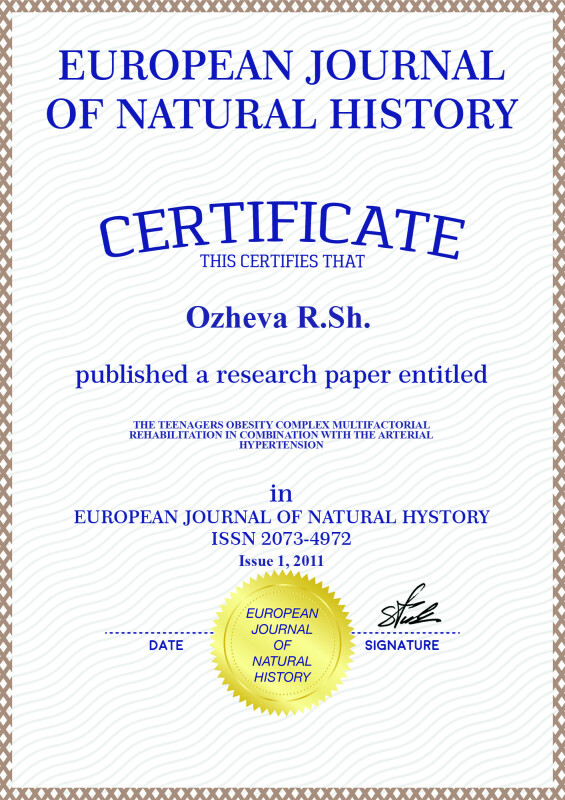 The carbohydrate, the lipid, and also the other metabolism types´ disorders complex combination diagnostics challenges are being caused the great scientific and the considerable practical interest, and their role discussion in the chronic diseases pathogenesis of the internal organs in the last and the recent years.

In this connection, the epidemiological researches and the studies currency is quite understandable, with the purpose of the earliest detection and its diagnosis of the risk factors, and the prophylactic arrangements commencement. For all this, it is quite necessary to be taken into consideration and such fact, that the arterial hypertension (AH), the overweight (ORW) human body, the lipid spectrum violation are often being passed against the background of the exo - and the endogenous intoxications [1, 3].

Thus, the main challenge is being confronted before the human organism - the normal homeostasis preservation, and also its optimization [2], at the endogenous intoxication. By V.M. Dilman expression, «the law deviation of the homeostasis» is being begun to be worked.

Thus, the work´s target has been the complex endo-ecological rehabilitation influence study and the examination upon the risk factors of the chronic non - infectious diseases.

The Material and the Method

The complex rehabilitation program has been consisted in the following approaches: the individual diagnostics, the basic teaching program, the video - and the printing information; the life style correction, the human organism cleaning and the purification, the human body mass normalization and the ABP, the entero-sorption, the bio-stimulation, and also the anti-oxidant therapeutics carrying out, the medicinal starvation and the therapeutic fasting, the hypo-caloric diet, and the medicinal herbs, the massage, the manual and the music therapy application. The complete medical treatment course has been continued 456 hours.

So, the 43 patients with quite different obesity severity degree, in the combination with the arterial hypertension (AH) have already been examined: the male youngsters - 28, and the female youngsters - 15. Then, the Quetelet index has been calculated, in order to be evaluated the human body fat mass accumulation degree, as the human body mass correlation, having expressed in the kilograms to his height, which is being expressed in the metres, having squared, that is the Quetelet index = MT (kg): the Height (m2).

The obesity abdominal type has been stated by the waist measurements (WM) correlation size to the thighs volume (TV). It is less 0,95 at the male youngsters, and it is less 0,80 at the female youngsters in the standard.

The Leukocytic Index of Intoxication (LII) is usually being calculated by the Ya.Ya. Kalf - Kalifa formula:

and the Intoxication Index (II) - by the neutrophils to the lymphocytes correlation (e.g. at the healthy ones up to 1,5). The lipoproteids fractions: LDL, VLDL, HDL [1] have been researched at all the examined ones. The 30 people have been made up the control group.

The obtained results have statistically been processed, by means of the t Student criterion.

The Results and Discussion

The examined females youngsters have got the highest Intoxication Index (II) from 2,06 up to 3,7 at the physiological oscillation up to 1,5; LII - 1,8 (e.g. at the healthy ones up to 1,0) in the pre-rehabilitation period [4].

So, the highest II has already been registered from 2,09 up to 4,0 at all the male youngsters, having entered into the rehabilitation group. Then, the abdominal obesity has been taken its place at the 54 % male youngsters and the 45 % female youngsters.

Thus, the initial high II at the male and the female youngsters with the abdominal obesity in the examined group is the main criterion, having reflected the adaptive systems violation, having needed the direct monitoring, at the endo-ecological rehabilitation carrying out.

All the given indicators will have to be taken into account, at the persons with the human body overweight mass, in combination with the arterial hypertension (AH), during the complex endo-ecological rehabilitation carrying out. All the same indicators are quite to be served, as the efficiency criteria of the carried out arrangements.

Then, it has been noted, the patients´ considerable quality life improvement, and also the complaints number decrease for the 87 %, as a result of the complex non-medicamental and the non-pharmacological program application.

And the arterial pressure complete normalization has been noted at all the male and the female youngsters.

Thus, the rehabilitation arrangements complex with the diet calorie content restriction is being accompanied by the endo-toxicosis degree decrease, by the complaints number decrease, by the life quality improvement, and also by the hemodynamic parameters normalization. So, the risk absence for the patient´s health is being dictated the possibility to be recommended the rehabilitation complex for the wide - scale introduction and the further realization into the public health practice.

1. The human body overweight mass (HBOM) presence, AH, the II increased, and also the lipid spectrum violations are the most convincing criteria for the complex endo-ecological rehabilitation carrying out.

2. The complex rehabilitation program with the hypo-high-calorie diet is the quite enough efficient approach for the multifactorial prophylaxis carrying out of the chronic non-infectious diseases.

The work is submitted to the International Scientific Conference «Science and Education in The Contemporary Russia», Moscow (Russia), 15-18 November, 2010, came to the editorial office оn 14.10.2010.