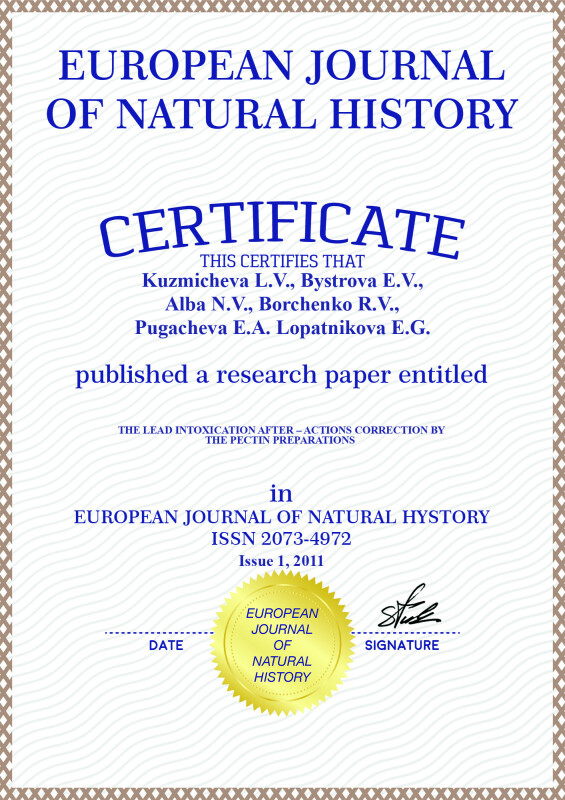 THE LEAD INTOXICATION AFTER – ACTIONS CORRECTION BY THE PECTIN PREPARATIONS

The direct influence such xenobiotics, as the heavy metal salts, is one from the most active factors, having attacked and destroyed the intestines epithelium normal structure. All these agents are being provoked the defects appearance in the mucous overlays and in the glycocalyx, having promoted the large protein molecules and the toxic substances entering into the blood [1].

The lead metabolism in the intestinal epithelial cell, may be, to be presented in the following way. So, the metal complex with the protein is being penetrated through the basilar membrane into the proper mucous plate of the small intestines and further into the blood capillaries and the blood channels [2]. Then, the blood, having contained the metal and having flowed from the small intestines, is being entered into the portal vein and further into the liver. The lead is partially being metabolized, and it is being formed the complex compounds with the bile and the taurocholic acids in the liver hepatocytes. So, in this form, it is being isolated into the small intestines lumen with the bile current. So, the metal part is usually being taken away with the faeces, but another part is being soaked through and it is being absorbed into once more, having provided, ipso facto, the hepato - enteric recirculation [3].

The contemporary biological means of the lead intoxication inhibition, as a rule, are being directed not only at the key metabolic imbalances correction, but and at the lead retention lowering in the human organism [4]. At present, the vegetable origin entero-sorbates are the most perspective for the systematic application, at the aims of the lead intoxication bio-prophylaxis, among which the pectins are being belonged to their special place. The pectins´ significant quality and their characteristic are being consisted in that they are much stable to the amylases action and the other ferments, and, that is why, they are not being soaked through, and they are not being absorbed into the small intestines. This kind of their quality and the characteristic are provided their peculiar physiological action - the ability to be bonded and to be taken the heavy metals from the human organism. Also, the pectin is quite able to be formed the gel on the stomach and the intestines mucous coat, and owing to this, to have the coating and the protective effect, having protected the mucous membranes from the aggressive factors stimulating and the irritating action [5].

The work´s target has been the pectin action study and the examination upon the rat´s small intestines epithelium morphological structure under the lead intoxication conditions.

The Materials and the Researches Methods

The study and the research have been carried out at the white non-pedigreed rats, which are the males, having had their 180-200 gr. mass. All these animals have been divided into 3 main groups: the 1-st one - the control one, where the animals ration has been made up from the grain, the seeds and the water; the 2-nd one - the rats have been got the lead acetate solution (e.g. 100 mg/kg), besides the conventional feeding by the grain and the seeds during the 168 hours, the 336 hours, and the 504 hours; the 3-rd one - the rats have been got the sugar beet pectin water solution with the etherification degree 43,15 ± 0,01 (e.g. 100 mg/kg) also during the 168 hours, the 336 hours, and the 504 hours, after the corresponding grain, the seeds, and the lead feeding term. All kinds of the manipulations with the animals have been carried out in the full accordance with the MPH of the USSR order «On the Humane Treatment with the Experimental Animals» №755, dated from July, 12, 1977; in the accordance with «The Works Carrying out Rules with the Experimental Animals Application» (e.g. the Higher Education Institution Ministry order, dated from November, 13, 1984, №724) and «The Rules, Having Accepted by the European Convention on the Backboned Animals Protection» (e.g. Strasbourg, 1986). The small section intestines areas have been served the special material for the research and the examination. The rats´ small section intestines fragments have been fixed in the 10 % formalin solution, having prepared on the phosphate buffer (e.g. Рн 7,2-7,4), they have been dehydrated in the increasing concentration alcohols, and they have been embedded in the paraffin for the histological study and the examination. Then, the sections, having the 5-7 mkm thickness on the sled microtome, have been prepared. The staining has been made by the hematoxylin and by the eosin. The microslides have been looked through in the light microscope (e.g. «Topic-T»), as the low - power (e.g. 10×10×1,25), well as the high - power magnification (e.g. 10×40×1,25) have been used. Then, the necessary preparations photography has been made by the «САМV200» digital camera (e.g. the «Vision», firm, Austria).

The Research Results and Their Discussion

The morphological changes in the small intestines tissues have already been revealed, in the result of the carried out researches and the studies. On the expiry of the week, the changes are being observed in the villi structure, under the lead influences. So, the overwhelming majority of them are being shortened, and the vacuoles are being seen in their epitheliums. So, the villi height and the crypt depth have been shortened along the whole length of the small intestines. And the micro-villi structure is being constantly changed: their quantity is being decreased per unit area that is affected upon the penetrability and the absorption processes. The goblet cells hypersecretion is noted that it is quite possible to be to be valued, as the protective reaction upon the injured agent influence, from the side of the epithelial cells. The mucous membrane is quite the loosened, the edematous, and the plethoric one. In the submucous layer separate places, the loosened connecting tissue is being quite atrophy, it is being destroyed in some areas, and it is being substituted by the unstructured homogeneous mass. So, it is quite well seen the myocytes bundles «dissociation» in the main mass.

The hemodynamic and the dystrophic changes degree has already been increased after the 312 hours at the intestinal wall research and the study after the metal influences. So, the expressed plethora and the marked hyperemia are being prevailed; and against this background, the zones and the areas with the spasmodic and the constricted vessels are being alternated with the sharp dilamation zones and the areas of the circulatory system all its sections. In a number of the places, the loose connective tissue is being completely atrophied in the submucous layer, and it is being observed the vacuoles, the hollows, the cavities presence, having lined by the cells, like the endothelium. The oxyphilic fibers with the clear - cut direction along the walls have already been discovered in all these cavities walls. The villi deformation is being observed in the mucous membrane with the great constancy and its regularity. There is the mucous membrane epithelium with the hydropic indications and the vacuolar degeneration signs: it has been desquamated at the some areas, and the quite and the evident symptoms of the desquamation are not being observed.

The villi have their elongated form; the epithelial cells desquamation, its cytoplasm vesiculation, the cytoplasm separate necroses are being brightly expressed, on the expiry of the 504 hours of the toxic influence and their effects. The expressed and the marked perivascular edema are being observed in the submucous membrane: the sharp-expressed plethora and the sharp-marked hyperemia, the plasmo- and the erythrostasis, the formed elements adhesion to the vascular wall (VW), the unit thrombi. All these morpho-structural changes, from the intestines side, are testified to on the heavy intestinal pathology development. The intestines epithelium structure changes are being observed, having researched and examined the microslides with the small intestines sections after the pectin influence during the 162, 336, and 508 hours.

The villi are the short, and the wide ones, the regeneration processes are being observed, and these villi height is quite different, just after the 168 hours. The hydropic and the vacuolar dystrophy are distinctly expressed. The goblet cells active secretion is being marked at many sites and the zones, much villi are being surrounded by the gel - like substance, probably, having formed by the pectin fibers. The cavities quantity and their sizes are being decreased, and the loose connective tissue is quite near to the normal state in the submucous layer.

So, the sharp changes are not being observed at the small intestines study and the examination after the pectin influence 312 hours. However, the villi structure, their height, and the width have been restored, but, nevertheless, the hydropic and the vacuolar dystrophy is being preserved.

The villi are as the long, well as the thin ones after the pectin influence during the 504 hours, and the small intestines mucous membrane structure is not quite distinguished from the mucous one state. The hydropic and the vacuolar dystrophy is quite absent in the villi epithelium, but it has been preserved in the glands epithelium. So, the loose connective tissue is being corresponded to the normal state in and around the villi.

Thus, the rat´s small intestines morpho-structural state histological analysis has been shown, that the pectin substances application, for the purpose of the lead intoxication bio-prophylaxis, is quite the reasonable one. The manifestation degree and the positive dynamics character is constantly being increased with the given entherosorbates application prolongation rise.