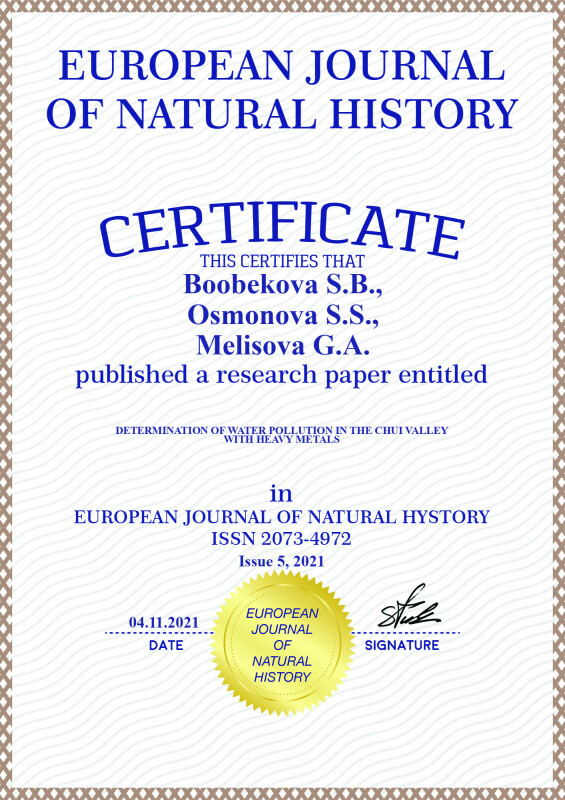 DETERMINATION OF WATER POLLUTION IN THE CHUI VALLEY WITH HEAVY METALS

Article in PDF
1267 KB
In the modern world, environ mental pollution: water, air and various chemicals is a global problem. We propose research work to lead the pollution of the water of the rivers of the Chui Valley, the Ala-Archa, Alamedin and BCHK rivers with various chemicals (heavy metals), sources of heavy metals, and what consequences will these pollution lead to when it enters the human body. Why did we choose the waters of the Chui Valley rivers: Ala-Archa, Alamedin and BCHK? Because, the Chui Valley, the city of Bishkek are densely populated areas, where there are many flows of various transport, large and small markets are located, and many enterprises. Also in this area there are sewage treatment plants and a landfill, which additionally pollute the water with various chemicals, including heavy metals. Lead, mercury, and cadmium were determined from heavy metals. The analysis was carried out spectrometrically using an atomic absorption spectrometer, AAS-7000. This method is a modern, convenient, fast, accurate, safe method and by this method very small concentrations of heavy metals can be determined. At the beginning of the article, we briefly dwelt on some of the properties of heavy metals (Pb, Hg, Cd).
chui
ala-archa
alamedin
heavy metals
plumbum
hydrargyrum
cadmium
1. Shakhanov B.M. Influence of the industrial zone of the Ak-Tyuz field on the composition of water bodies of the river. Kichi-Kemin / B. M. Shakhanov, V. P. Solodukhin, V. L. Poznyak // Modern problems of geochemical ecology and conservation of biodiversity: materials of the conference dedicated to the 70th anniversary of the BPI NAS KR, the year of ecological cuture and environmental protection ( CIS) and the 150th anniversary of the birth of V.I. Vernadsky (Bishkek, September 17-27, 2013). Bishkek, 2013. – pp. 103-106.
2. Shiklomanov I. А. Research of water resources / I.А. Shiklomanov. – M.: Book on demand, 2014. – 154 p.
3. Motuzova, GV Chemical pollution of the biosphere and its ecological consequences. Publishing house of Moscow University, 2013. – P. 95-124.
4. Boobekova S.B. Ailana chөyrөnүn khimiyalyk zattardan bulganuusu zhana anyn kesepetteri / S.B. Bobekova. – Bishkek: 2017. – P. 65-73, 91-95.
5. Chegrintsev S.N. Atomic absorption analysis: guidelines for laboratory work in the course «Physicochemical methods of analysis» for IV year students / S.N. Chegrintsev. – Tomsk: Tomsk Polytechnic University Publishing House, 2014. – 44 p.

The growth of cities, the rapid development of industry, the intensification of agriculture, the improvement of the cultural and living conditions of people and a number of other factors have led to the pollution of water resources.

This is especially the case in densely populated areas, cities where there are large traffic flows, large and small markets are located, there are many gas stations and other enterprises [1].

The purpose of this work is to study the pollution of the water of the Chui Valley rivers: Ala-Archa, Alamedin, BCHK with heavy metals.

The purpose of this work is to study the pollution of the water of the Chui Valley rivers: Ala-Archa, Alamedin, Big Chui river with heavy metals. Lead, mercury, cadmium were taken from heavy metals. Water is very necessary product for human because our body consists of 60-70 % water. There is present in all parts of body. For example: brain contains 70 %, heart 75 %, lungs 85 %, liver 86 %, kidneys 83 %, muscles 75 %, blood 83 %. Therefore, the lack of water brings difficulty for the body to tolerate. Dehydration contributes to the development of many diseases [1].

The danger of lead for humans is that it is highly toxic and can accumulate in the body. Lead gets in to the human body with food (40-70 %), drinking water, dust from contaminated soils, etc. Lead enters the environment, that is, soil, water, atmosphere with salts of inorganic acids (lead chloride, lead sulphate) from transport, where highly toxic alkylated compounds tetraethyl lead, tetramethyl lead are used, from lead paints, batteries

Mercury kills the nervous system of humans and other animals. When exposed to mercury on the human body, memory gets worse (Alzheimer’s disease), and we get anxiety and self-doubt, irritability and headaches, bleeding gums, heart disease, urination problems, etc [3].

Cadmium is dangerous with its any form. A dose of 30-40 mg is lethal. When cadmium enters the body, it damages the kidneys and the nervous system, disrupts the functions of the genitals, and causes acute bone pain in the back and legs. In addition, cadmium causes impairment of lung function and has a carcinogenic effect, accumulates in the kidneys, and people get poisoning.

Cadmium is easily absorbed by plants from the soil, also we can find it in tobacco leaves, and therefore tobacco smoke has a high cadmium content.

To determine the content of the above heavy metals, we have chosen a spectrometric method using an AAS-7000 atomic absorption spectrometer.

The essence of this method is in the resonant absorption of electromagnetic (visible) radiation of a certain wavelength through a layer of atomic vapors of the element being determined [5].

Sampling for chemical analysis is carried out in accordance with GOST 17.1.5.05-85. Water is taken in containers with a volume of 500 ml, 1 liter from a polymer material, which should not enter into a reaction with the sample, so as not to change the composition of the water.

The experimentation data came out from the spectrometric analysis of the water of the Ala-Archa, Alamedin and big chui rivers are given in tables 1, 2, 3. Using these datas of these tables, we have constructed diagrams 1, 2, 3 and gradient-level plots 1, 2, 3.

Table 1 shows the experimental data obtained in the study of the water of the Ala-Archa River.

To compare the content of heavy metals in water, the tables give the maximum concentration.

Fig. 1. Diagram and calibration graph of the content of heavy metals in the water of the Ala-Archa river

Mercury at points 1 and 3 is less than the maximun concentration, at point 2 it is equal to the MC.

Cadmium A-Ar-1 is 1.66 times more, at the second point it corresponds to the MC, at the third point it is 1.34 times lower than the norm.

Using the data in Table 1, we built diagrams and calibration graphs.

Experimental data on the study of the water of the Alamedin River, we showed in table 2, in diagram 2 and calibration graph 2.

As we can see from Table 2, the lead content of the Alamedin River at all three points exceeds the MPC 200 times. In our opinion, this is due to the fact that the Alamedin River flows in those places where there are large traffic flows, densely populated areas, and many different enterprises.

Fig. 2. Diagram and calibration graph of the content of heavy metals in the water of the Alamedin River

Mercury in the Alamedin River is contained below the MPC, and at the Ala-2 point it corresponds to the maximum permissible concentration, below the norm.

Cadmium at all three points exceeds the maximum permissible concentration by about 6 times. The data on the determination of heavy metals in the water of the Big Chui River we presented in table 3.

Fig. 3. Diagram and calibration graph of the content of heavy metals in the water of the Big chui river

On the contrary, mercury does not exceed at points 1 and 3, at the second point the content of mercury is equal to the MPC.

As mentioned above, cadmium is found most of all in tobacco and tobacco smoke. Using the data in Table 3, diagram 3 and calibration curve 3 are constructed.

Thus, we have determined the content of heavy metals (Pb, Hg, Cd) in the waters of the Ala-Archa, Alamedin and Big chui rivers, which flow through the city of Bishkek. As we expected, the dense population of the city, a large flow and resulting traffic jams, the discharge of untreated industrial and domestic wastewater and many other reasons will lead to water pollution in the Ala-Archa, Alamedin and Big chui rivers.

The use of a universal, accurate, modern atomic absorption method made it possible to determine the trace amount of these heavy metals in the water of these rivers.