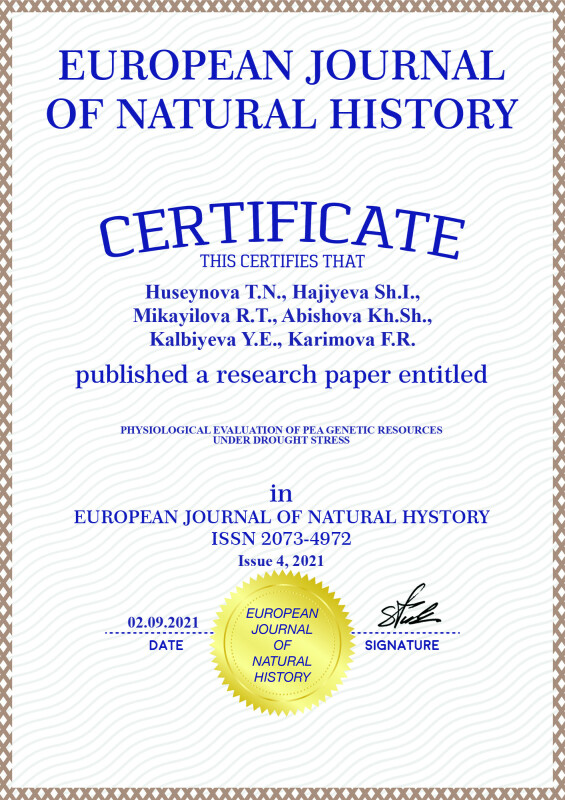 Article in PDF
293 KB
The tolerance of plants to unfavorable environmental factors is one of the most important characteristics that characterize their adaptation to environmental conditions. This feature allows plants to survive in extreme conditions, including drought, and reveals their adaptive properties. The plants are exposed to a number of natural factors that limit their growth and productivity, which is manifested in a number of changes that occur at the cellular, physiological and biochemical levels. Evaluation of the photosynthetic properties of plants is of great importance in the study of their tolerance to environmental stresses. Since photosynthetic pigments are directly related to photosynthetic potential and initial productivity, the physiological state of plants can be assessed by determining the amount of pigments. So it is of great practical importance to determine them based on physiological indicators. The aim of the investigation is to study the adaptation of new genetic resources of peas (Cicer arietinum L.), introduced to enrich the national gene pool, to the negative consequences of drought from abiotic stresses and to assess the degree of resistance to drought. 20 pea (Cicer arietinum L.) samples of ICARDA origin were evaluated based on physiological parameters associated with drought tolerance. The genetic resources of the pea tolerant to abiotic stresses were selected for use in various breeding programs.
pea
physiological parameters
abiotic stresses
drought
chlorophyll
carotenoids

Environmental degradation have led to increased stress, reducing of plant genetic resources, destruction of many valuable plants and the emergence of harmful combinations of genes and mutant forms. Currently, one of the most pressing issues in agriculture is the conservation and effective use of plant genetic resources, including legume biodiversity. One of the ways to solve the problems of food security of the population is to increase and develop grain and leguminous crops, which are considered the main food of humanity and an important source of vegetable protein. From this point of view, it is very important to expand the collection of leguminous crops, including peas, and create new varieties and forms that meet the requirements of intensive farming and are tolerant to changing environmental factors. The selected best genetic sources should be used in this process as valuable donors for environmental traits and indicators.

During their life cycle, plants are exposed to almost all natural factors, which negatively affects their growth and development, productivity and distribution of species. Complex responses to abiotic stresses are manifested by changes at the cellular, physiological and biochemical levels. The answer depends on the intensity and duration of stress, plant genotype, developmental stage, and environmental factors. In order to better understand the mechanism of plant adaptation to various stresses, it is necessary to develop new strategies for the breeding of tolerant genotypes, in order to ensure the growth and development of plants, their productivity under environmental stress.

It is necessary to develop new strategies for the selection of tolerant genotypes in order to ensure the growth and development of plants, their productivity under environmental stress conditions, and to better understand the mechanism of plant adaptation to various stresses.

Environmental problems associated with pollution are at the center of attention of the modern world. The consequences of any pollution seriously affect vegetation; therefore, crop production is multifaceted and subject to various studies. The majority of research focuses on the development and physiology of plants, their adaptation, reproductive ability, genetic variation, and so on. Taking into account the constantly increasing negative impact of abiotic stresses on the environment, conducting eco physiological studies is of great interest for agriculture.

The tolerance of plants to unfavorable environmental factors is one of the most important characteristics that characterize their adaptation to external environmental conditions. This feature allows plants to survive in extreme conditions, including drought, and reveals their adaptive properties. Throughout their life, plants are exposed to a number of natural factors that limit their growth and productivity, which is manifested in a number of changes that occur at the cellular, physiological and biochemical levels. The response of plants to abiotic stresses depends on the intensity and duration of stress, plant genotype, and developmental stage. Stress tolerance of plants characterizes the ability of plant organisms to perform their basic life functions in extreme environmental conditions, and the criterion of tolerance reflects the quantitative aspect of this ability. While every species, cultivar, or even individual plant has stress tolerance, it is a genetically controlled and inherited trait.

Under optimal conditions, this remains hidden and is only detected when the plant is exposed to extreme stress. The study of plant adaptation to various stresses is very important for the development of new strategies for the breeding of tolerant genotypes.

Tolerance of agricultural crops to drought, high or low temperatures, excessive humidity, salinization, etc. to adverse environmental factors such as climate change means that plants are tolerant to these extreme factors. The degree of tolerance inherent in each plant is determined by exposure to extreme environmental factors. As a result of exposure to such stress factors, a number of physiological parameters deviate from the norm, which leads to the loss of many agricultural products. Therefore, the use of plant varieties that are tolerant to environmental stress is of great economic importance. The complexity of breeding work on resistance to abiotic stress consists of control of complex genes with a complex structure to the response of plants to the effect of abiotic stress.

Drought is one of the main abiotic stressors in the environment. The negative effect of this factor slows down the growth of plants, weakens their physiological functions and even destroys the plants. Drought disrupts the normal course of many processes and has various physiological effects on plants. First of all, it causes water loss in plants. In the absence of water, leaf transpiration accelerates the flow of water into tissues, which creates a water deficit. A decrease in the amount of water leads to an increase in osmotic pressure in plants, a weakening of turgor and a closure of the stomata. Decreased transpiration leads to overheating of plants. All these changes make changes the chemical-colloidal composition of the cell cytoplasm (their viscosity and elasticity) and the permeability of the cell membrane. During drought, the amount of phytohormones regulating the growth – auxins, gibberellins and cytokines – decreases, the amount of abscisic acid increases.

These changes adversely affect the process of plant growth, causing the failure of the photosynthetic apparatus. Under conditions of water shortage and high temperatures, chloroplasts are destroyed and the synthesis of chlorophyll a and chlorophyll b is disrupted [1, 2]. Thus, drought has a strong and complex negative impact on many physiological processes. Since the parameters of photosynthesis, especially total chlorophyll, are directly related to photosynthetic potential and initial productivity, it is important to assess the degree of resistance based on the quantitative determination of chlorophyll when studying plant resistance to abiotic stresses.

One of the ways to use arid lands for agricultural production is the creation and cultivation of drought and salt tolerant plants.

The study was carried out on 20 samples of peas (Cicer arietinum L.) of ICARDA origin. To assess the drought tolerance of these samples planted in the field, leaf samples were taken from them during the flowering phase and the changes in the amount of chlorophyll a, chlorophyll b, chlorophyll a + b, and carotenoids were identified, which are indicators of photosynthesis associated with drought stress in the laboratory [3], and stress-resistant samples were taken.

Evaluation of photosynthetic traits is of great importance in the study of plant stress tolerance. Since photosynthetic pigments are directly related to photosynthetic potential and initial productivity, the physiological state of plants can be assessed by determining the amount of pigments. Photosynthetic pigments determine the activity of plants and are impacted by a number of environmental factors. So it is of great practical importance to determine them on the basis of physiological indicators. The pigment complex of a plant organism is characterized by sensitivity to changing environmental conditions. Under conditions of water shortage and high temperatures, the destruction of chloroplasts occurs and the synthesis of chlorophyll a and chlorophyll b is disrupted, the ratio of chlorophyll-protein-lipid complex of plastids changes.

Stressed plants show signs of adaptation, which increases the plant’s tolerance to stress. It is known that the amount of photosynthetic pigments depends on the level of the impact of stress. Since an increase in the stress resistance of plant tissues is closely related to the state of the plastid apparatus, an increase in the total amount of chlorophyll can be considered as a plant response to stress caused by drought. It is also known from the literature that the leaves of stressed plants contain a large amount of tightly bound chlorophyll and are less susceptible to changes during stress [4]. Thus, in comparison with plants, sustainable to stress, the pigment system of drought-resistant plants is characterized by smaller changes in the effect of stress. This variability is mainly associated with the labile combined chlorophyll a, while chlorophyll b is stronger and less susceptible to change. This correlates with the very strong energy bond of the water molecule in chlorophyll b compared to chlorophyll a. All this proves that the pigment system of plants plays an important role in stress.

There was a positive correlation between the drought tolerance of pea samples and the change in the content of carotenoids in percentage (Table). In these samples, the percentage change for carotenoids was high (120.2 % – 98.2 %). As we know, carotenoids are an important companion of chlorophyll in the process of photosynthesis. They absorb shortwave radiation and transfer its energy to chlorophyll, increasing the efficiency of light. Carotenoids also have a protective function during photosynthesis [5].

During the research, the following results were obtained:

The evaluated samples can be recommended for use as a genetic source of drought resistance in future breeding work.