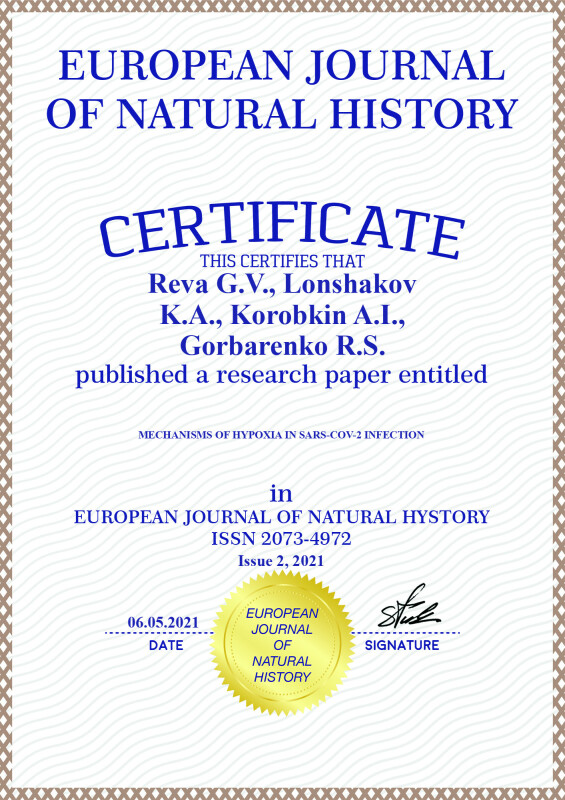 MECHANISMS OF HYPOXIA IN SARS-COV-2 INFECTION

The COVID-19 pandemic at the present stage is one of the most dangerous and serious global problems [1, 2, 3]. The rapid spread of the SARS-COV-2 virus from China to almost all countries of the world, has reached the number of infections of more than 3,236,787. In Russia alone, 24,150 patients are registered per day, 19,847 recovering daily and daily deaths 504. Lack of real etiotropic treatment, the inability to predict the outcome of the disease, high mortality from COVID-19, as well as little-studied consequences for patients who have undergone SARS-COV-2 infection, depending on the severity of the course of the disease, indicate the importance and high relevance of research conducted in the direction of studying the mechanisms of pathogenesis of COVID-19 [4, 5, 6]. The consequences of the postponed COVID-19 infection at the present stage are not known, however, the results of numerous studies have indicated the role of microorganisms, especially viruses, as promoters of tissue malignancy, inducing carcinogenesis in various systems of human organs [7, 8, 9]. At the same time, the authors associate tissue malignancy with impaired iron metabolism in the body of virus-infected patients, which leads to hypoxia and anemia. These data determined the direction of our research in terms of studying the mechanisms of hypoxia during SARS-COV-2 infection.

The aim of the research

The aim of the study to determine the mechanisms of hypoxia during SARS-COV-2 infection.

The material for the research was the results of observations and data from clinical and biochemical studies in patients undergoing inpatient treatment in infectious diseases hospitals in the Primorsky Territory. The paper analyzes and discusses the results of our own blood tests of patients who died from COVID-19 caused by SARS-COV-2, with PCR confirmation. To obtain data on the distribution of erythrocytes in the blood vessels of the tissues of deceased patients, a biopsy material was examined, obtained in accordance with the order of the Ministry of Healthcare of the Russian Federation dated 04.29.94 N 82 “On the procedure for conducting pathological autopsies”, according to the rules of the instructions governing the procedure for autopsies in medical institutions. The control group consisted of 14 patients who died as a result of injuries incompatible with life, presumably without somatic pathology at the age of 24 to 76 years. The results obtained in age groups in which the age of patients ranged from 21 to 91 years are considered. The clinical material was divided by sex and age groups; a total of 61 patients were considered, of which 33 were men and 28 were women. As a result of treatment, 29 people (15 men, 14 women) were discharged for outpatient treatment and observation, 32 people died (17 men and 14 women). The biopsy material was recorded according to the prescription for preparation for histological examinations immediately after collection. The exclusion of possible artifacts is based on data obtained during a special study on dogs, indicating that when corpses are stored at a temperature of 4 °-7 °C for 24-26 hours, microscopically visible changes in the morphology of various organ systems are not observed, except for a slight decrease in the intensity of specific reactions to enzymatic activity. We used classical histological research methods with staining with hematoxylin and eosin to obtain a general morphological picture. The morphological method of the study consisted in the preparation of sections from paraffin blocks of biopsies of the lung, liver, heart, spleen, kidneys of the victims of SARS-COV-2, followed by staining with hematoxylin and eosin in accordance with the classical protocol. Analysis of preparations and production of illustrations were performed using an Olympus Bx52 microscope and a DP25 digital camera with proprietary software.

Coronavirus disease, COVID-19, refers to infectious and inflammatory diseases that mainly affect the respiratory system. Invasion of SARS-CoV-2 into a human cell is mediated through receptors for angiotensin-converting enzyme-2 and a number of other cellular receptors, which causes an imbalance in the renin-angiotensin system, vasoconstriction and a pro-inflammatory effect. Angiotensin-converting enzyme-2 is present on the cells of the alveolar epithelium, which determines the damage to the respiratory system, damage to the vascular endothelium of the lungs, contributes to the development of acute respiratory distress syndrome and is the most important link in the pathogenesis of their damage in COVID-19.

However, an analysis of scientific information from the available literature and data from our own studies indicate two key pathogenetic mechanisms in the development of hypoxia in patients infected with SARS-CoV-2: 1) the development of severe acute respiratory syndrome as a result of damage by the SARS-CoV-2 coronavirus to structures in the composition airborne barrier: respiratory epithelium in the alveolar wall, as well as endothelium (Figure, a) and 2) the appearance of pathological forms of erythrocytes with an increase in the number of hypochromic red blood cells (Figure, b, c).

Lung of a person infected with SARS-CoV-2. Staining with hematoxylin and eosin. Microphoto. Uv.x400.a) a blood vessel with damaged endothelium; b) hypochromic erythrocytes; c) macrophage with hemosiderin

In the field of view, hypochromic erythrocytes are identified (indicated by an asterisk), echinocytes are observed in the lumen of the vessels, as well as erythrocytes with Jolly bodies. The presence of an excess of normal numbers of altered forms and sizes of erythrocytes indicates anisocytosis and poikilocytosis. Also, macrophages with phagocytosed hemosiderin are identified (Figure. c, indicated by an arrow). The presence of hemosiderin granules in the cytoplasm of macrophages may indicate blocking of the transport protein for iron, which is required for the synthesis of hemoglobin in the red bone marrow [10, 11]. The destruction of red blood cells in tissues outside the spleen also indicates a violation of hematopoiesis in the direction of the erythroid lineage and changes in iron metabolism in the body of patients infected with SARS-CoV-2. We also noted that hemoglobin levels were lower in the older age group, among them there was a higher percentage of patients with diabetes, hypertension and general concomitant diseases, which contributed to a greater severity of clinical manifestations in older patients.

Considering the high importance in hematopoiesis of the mechanisms for the induction of iron transport into the red bone marrow, cellular signaling interactions in this process, the role of ferritin and its regulation in the hematopoietic system, it is necessary to note the insufficient study of these issues. The concept is known according to which SARS-CoV-2 interacts with the hemoglobin molecule through CD147, CD26 and other receptors located on the precursors of erythrocytes and other blood cells, inducing the hepcidin-mimetic action of the viral spike protein, which causes the blocking of ferroportin. Ferroportin is the only known protein-exporter of cellular iron, therefore, when it is blocked, the adsorption of iron in the intestine is significantly reduced, which can result in iron deficiency anemia. Research in context of SARS-CoV suggests that iron is essential for replication of the virus family Coronaviridae. Due to the presence of angiotensin-converting enzyme-2 receptors, SARS-CoV2 can colonize macrophages, enterocytes and hepatocytes. These cells sequester iron in cytosolic ferritin to limit it for viral replication [4, 12].

Penetration of the SARS-CoV-2 virus into the human body can trigger the activation of an excessive number of immune cells, which will cause the secretion of cytokines and chemokines such as TNF-α, IFN-γ, IL-6 and IL-8. These immune responses are associated with Kupffer cells (specialized hepatic macrophages) and intrahepatic cytotoxic T cells, which leads to hypoxia, ischemia. Due to ischemia and hypoxia, lipid accumulation, glycogen consumption, and adenosine triphosphate depletion in hepatocytes, cell survival signaling can be suppressed, which quickly leads to hepatocyte death. In severe cases of COVID-19, imbalanced immune responses are observed, in which liver damage is accompanied by coagulation and fibrinolytic pathways with necrosis of liver cells and changes in iron metabolism and activation of macrophages. Consequently, IL6 is a major inflammatory mediator involved in iron processing as it induces hepcidin production.

Disorders of iron metabolism after the onset of the disease can persist for at least two months. Such prolonged hyperferritinemia leads to a decrease in the physical performance of patients and to aggravating lung pathologies. It also follows that screening serum ferritin levels may be a readily available test of disease severity.

The following pathological pathways of metabolism, resulting from denaturation of hemoglobin and dysregulation of iron metabolism, have been identified: 1) decrease in the level of functioning hemoglobin; 2) iron overload of tissues and hyperferritinemia; 3) the release of free circulating iron and its release into tissues with a toxic effect on cells; 4) hypoxemia, local and systemic hypoxia; 5) mitochondrial degeneration and apoptosis. At the same time, several clinical syndromes begin to develop, such as pulmonary edema due to vasoconstriction in the pulmonary artery system against the background of changes in the structures of the air-blood barrier, sideroblast-like anemia, endotheliitis, vasospastic acrosyndrome and arteriovenous thromboembolism.

Excessive accumulation of iron in cells can lead to ferroptosis with oxidative stress. Ferroptosis morphologically will be characterized by a change in the size of mitochondria with an increase in the density of their membranes. Classical manifestations of apoptosis, such as condensation of chromatin and subsequent fragmentation of the nucleus, are not typical for it. Ferroptosis causes cell death due to the accumulation of lipid ROS (reactive oxygen species), which causes fatal changes in the biological membranes of the cell.

The formation of ROS under the influence of iron ions is one of the possible causes of cell death during infection with SARS-CoV-2. Increased serum transferrin activity or intracellular iron ion concentration increases the risk of cell ferroptosis, so iron chelating agents may be useful in treatment strategies in these patients.

Iron chelators also exhibit immunomodulatory effects. They can attenuate acute respiratory distress syndrome and help control the course of infection through the following mechanisms: 1) inhibition of viral replication by limiting the iron required for this; 2) activation of B-cells; 3) improving the titer of neutralizing antiviral antibodies; 4) inhibition of endothelial inflammation by blocking IL-6; 5) prevention of pulmonary fibrosis by reducing iron deposition in the lung tissue.

Thus, we believe that in COVID-19, in addition to the classical point of view on pulmonary immune inflammation, it is necessary to take into account the mechanisms of hypoxia due to the dysregulation of iron metabolism. A more comprehensive diagnostic and therapeutic approach to COVID-19 is proposed, which will use the necessary adjuvant conservative methods in order to increase the hemoglobin content, reduce excess iron deposition in the tissues of various organs, control its delivery to the spleen, and also search for methods to relieve the general hypoxic state in addition to artificial ventilation.

1. The number of hypochromic erythrocytes, as well as parameters of the level of hemoglobin concentration, poikilocytosis and anisocytosis of erythrocytes are one of the key indicators in assessing anemia and hypoxia in COVID-19, and also serve as prognostic markers in assessing the severity of the prognosis.

2. Patients with low hemoglobin and hypochromic anemia require intensive therapy with oxygenation through the mechanisms of erythropoiesis.

The study was financially supported by the International Medical Research and Education Center (Vladivostok, Russia).