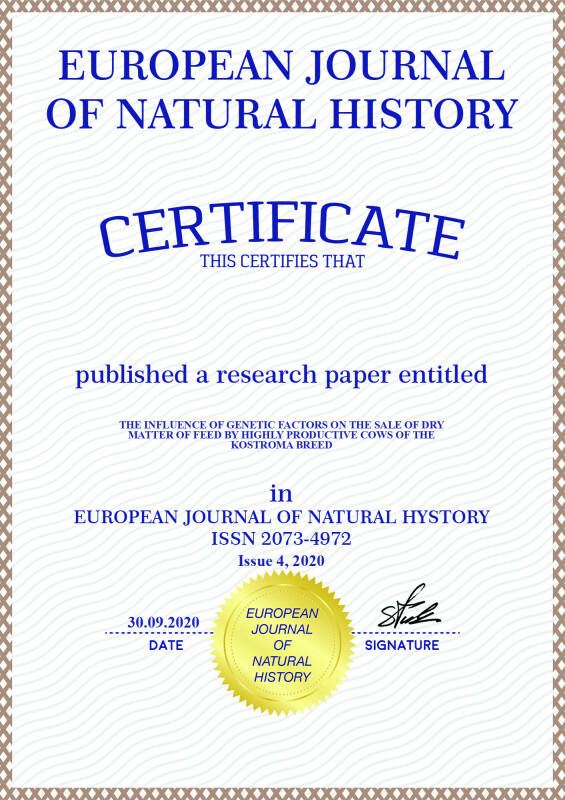 Article in PDF
0 KB
The current situation in our country obliges us to take measures to import substitution and increase the rate of production of our own products. There is a possibility that in the near future we will have to focus not on the purchase of imported livestock, as it was done earlier, but on the rational use of our own resources. To implement ideas on import substitution in animal husbandry, it is necessary to form herds of cows with a high level of biological potential and biological value of products, as well as high efficiency of using dry matter of feed, which will contribute to the fullest realization of the genetic potential of the breed. The value of dairy products is determined by the content of all components that make up milk (fat and protein content, nonfat milk solid, dry matter, etc.). Dry matter is the basis for determining the consumption rate of all other nutrients of the feed, a high level of which ensures the intake of the necessary amount of energy and nutrients into the body of the animal, which in turn contributes to the most complete realization of the genotype. An objective assessment of the effectiveness of dry matter is given by the FCR and GFE coefficients, which are influenced by many factors, including genetic ones.
cows
Kostroma breed
feed
dry matter
feed coefficients
nonfat milk solid
1. Glebova A.S., Krasilshchik E.A. Veterinary Medicine in the Range of Problems of Sustainable Development // Actual issues of the development of science and technology: Collection of articles of the international scientific-practical conference of young scientists. Kostroma State Agricultural Academy, 2017. P. 183-188.
2. Baranov A.V. Assessment and rational use of the gene pool of the Kostroma breed of cattle [Text] / А.V. Baranov, B.V. Shalugin // Achievements of science and technology of the agro-industrial complex. 2011. No. 9. P. 48-51.
3. Sulimova G.E. Prospects for the use of Kostroma cattle in dairy and beef cattle breeding / 70 years of Kostroma cattle: collection of articles. Karavaevo: Kostroma State Agricultural Academy, 2014. P. 62-71.
4. Karnaukhov Yu.A., Andriyanova E.M. Biological efficiency of cows and environmental safety of products depending on the genotype of animals // Bulletin of the Orenburg State Agrarian University. 2010. P. 100-102.
5. Zamani Pouya. Efficiency of Lactation / Milk production – an up-to-date overview of animal nutrition, management and health. Publisher: InTech, Editors: Narongsak Chaiyabutr, september 2012. Р. 139-150. DOI: 10.5772/50772.
6. Malaev D. Coefficients of efficiency of lactation [Electronic resource] / Alpha TMR. Dairy farming from A to Z. 2017. URL: http://alfatmr.ru/articles/koeffitsienty-effektivnosti-laktatsii/

At the present, in connection with the intensification of agricultural production in the Kostroma region, which corresponds to the agricultural policy in realization the program of sustainable development in agriculture [1, 2], accelerated improvement of breeding and productive qualities of cows is of great importance, special attention being given to the breeding of cows of the Kostroma breed. These animals have the biological value of dairy products, significant potential in increasing yields and quality of milk, and their gene pool, due to the selection and breed-crossing, provides genetic diversity, and also makes it possible to obtain a significant number of livestock with different pedigree levels in regard to the improving breed. Breeding of dairy cattle is carried out along lines that perform differently under different conditions.

The value of dairy products is determined not only by the content of the main components (fat and protein), but also by all other substances that make up milk (dry matter, nonfat milk solid, etc.). Dry matter is the basis for determining the consumption rate of all other feed nutrients, a high level of which ensures the intake of the necessary amount of energy and nutrients into the body of the animal, which in turn contributes to the most complete realization of the genotype. Since highly productive cows bear the genetic potential of the breed and determine the effectiveness of breeding work, studying the efficiency of using dry matter of feed on their example is an urgent task [2, 3, 4].

The most objective assessment of the efficiency of consumption of dry matter feed by a cow and its conversion into milk is provided by the feed coefficient (FCR) and gross feed utilization efficiency (GFE) [5, 6].

Purpose of the study

The object of research was 272 cows from the breeding plant of the APC collective farm “Rodina” of the Krasnoselsky district of the Kostroma region. The material for the study was the data of breeding and zootechnical records. To conduct the study, we selected highly productive cows with milk yields by highest lactation on 1.5 or more standard deviations exceeding the average level in the herd.

Feed coefficient (FCR) was determined by the formula [5, 6]:

where, DMI and MY are dry matter intake and milk yield, respectively.

The record-breaking cows are of particular importance in dairy cattle. The results of their raising indicate a high level of productive and breeding qualities at this stage and reveal the possibilities for further improvement of the breed.

From the data in Table 1, the highest milk yields шn the APC, the collective farm “Rodina” were achieved by the cow Kupava 39172 of the breeding line from Meridian 90827 for 1st lactation and the cow Galushka 3053 from the breeding line Lada 2537 for 4th lactation. Their milk yields amounted to 11181 kg and 10415 kg of milk, respectively.

Differences in the number of highly productive cows in individual lines and related groups of the breed were revealed (Fig. 1). From the diagram shown in Fig. 1 it follows that among the highly productive cows in the APC collective farm “Rodina”, the majority of cows are represented by animals of the Lada 2537 line (11 heads) and by related groups of Master 106902 (6 heads) and those of Meridian 90827 (6 heads).

The Kostroma cattle breed has been improved with the brown Swiss of various breeding since the 70s of the XX century. As a result, the herds of the Kostroma cattle breeding zone, including the APC collective farm “Rodina”, have accumulated genetic material of different pedigree blood content by the improving breed, among which there are highly productive cows (Fig. 2).

Fig. 2 shows that on the collective farm most of highly productive cows are animals with pedigree blood content less than 50 % (16 animals) and more than 50 % (7 animals).

From the data of table 2 it follows that the highest milk yield had cows with a blood content of 25 % by the improving breed, their milk yield amounted to 9074 kg of milk. A high fat content in milk was noted among peers of the improved breed – 4.14 %. According to the content of dry matter and nonfat milk solid, half bred cows are distinguished: 12.75 % and 8.99 %, respectively. The highest FCR and GFE ratios have peers of the improved breed; exceeding the number of cows with pedigree blood content of 0-24 % was 0.12 % and 0.04 %, respectively, with a reliable difference (P < 0.05).

The most objective assessment of the efficiency of consumption of feed dry matter by a cow and its conversion into milk is provided by the feed coefficient (FCR) and gross feed utilization efficiency (GFE). Fig. 3 presents a graphical representation of the indicators of the feed dry matter conversion in highly productive cows of different thorough bredness.

As it can be seen in Figure 3, the highest indicators of the feed coefficient (FCR) were observed in peers of the improved breed and animals with a blood content of 26-49 %, and the lowest – in cows with blood content of 0-24 %.

Differences in indicators in animals of different lines and related groups are characterized by the quality of the sires used and the degree of realization of the genetic potential.

Conversion of feed dry matter into milk, depending on the amount of blood supply from the improving breed

Fig. 3. Conversion of feed dry matter depending on the blood content

Conversion of feed dry matter into milk, depending on the genealogy

Fig. 4. Conversion of feed dry matter depending on the genealogical affiliation

Thus, highly productive cows of the Kostroma breed have a high level of conversion of feed dry matter into milk, which is a potential for increasing milk production and improving the quality of dairy products. In APC the collective farm “Rodina”, under appropriate feeding conditions, feed dry material is converted into milk more effectively in peers of the improved breed and in animals of the production lines of Kurs 3722 and Ladka 2537. The use of the “feed coefficient” and “gross feed efficiency” indicators in the future will positively affect the effectiveness of breeding work.