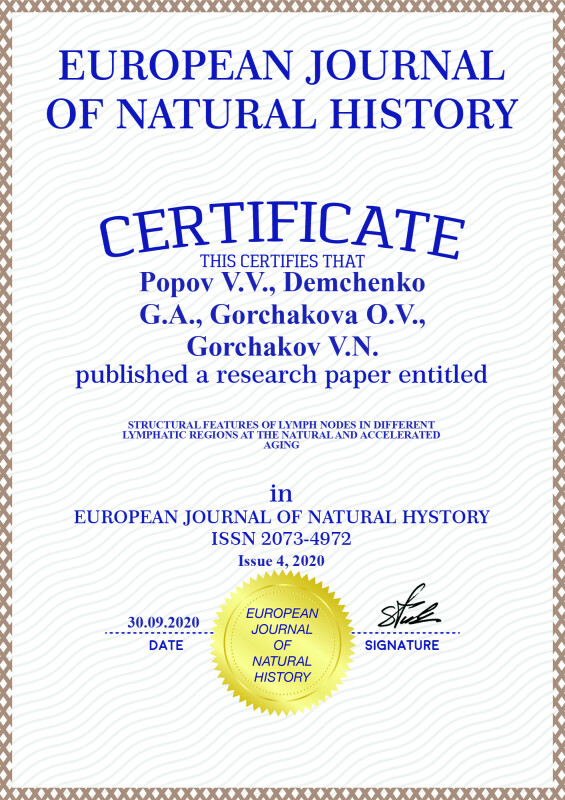 Popov V.V. 1 Demchenko G.A. 2 Gorchakova O.V. 3 Gorchakov V.N. 1, 3
1 Novosibirsk State University
2 Institute of Physiology of Human and Animals of Committee of Science of the Ministry of Education and Science of the Republic of Kazakhstan
3 Research Institute of a clinical and experimental Lymphology – branch of Institute of Cytology and Genetics of the Siberian Branch of the Russian Academy of Science

Clarification of the reasons of aging of lymphoid tissue has special relevance because of increase in number of old people in the country and need of specification of pathogenesis and search of method of prevention. Aging of an organism affects in structure and function of many organs including lymph nodes, leading to decrease of protective function and development of immune insufficiency [1]. Lymph nodes are key elements of different lymphatic regions, and lymph nodes define a regional immunological homeostasis [2, 3]. There is an urgent need of a morph of functional assessment of lymph nodes depending on localization taking into account an age factor. There is no uniform theory of aging [4]. Researchers combine often the mechanism of aging and pathogenesis of immune insufficiency. Considering the aging problem, it is necessary to consider close functional linkages between homeostatic systems from which it is possible to distinguish peripheral lymphoid organs [5, 6]. It is impossible to consider separately age evolution and aging of lymphoid tissue without structural reorganization of lymph nodes. Emergence of model of senilism of the line of rats of OXYS [7] is an argument for studying morphological equivalents of aging of lymph nodes. Reactive changes of structure of lymph nodes not always find an explanation, especially in a syndrome of the accelerated aging.

The purpose of work is a research of age changes of lymph nodes of different localization at OXYS rats with a syndrome of premature aging and Wistar rats with the normal rate of aging.

Work is performed on rats males of the OXYS and Wistar lines according to “Rules of work with use of experimental animals” (86/609/EEC). Rats of the Wistar and OXYS lines are received from Center of collective use “Gene pools of laboratory animals” of Institute of cytology and genetics of the SB RAS. N.G. Kolosova is a holder of the license for OXYS rats. These rats have genetically caused defect, it is considered as an accelerated aging syndrome [7]. OXYS rats differ in low lifetime, early involute and pathological changes of internals, frequent developing of tumors in comparison with Wistar rats.

The experiment was executed on young and old white rats. The age of rats is 3 months and 1.5 years. We investigated by a morphological method of mesenteric, inguinal and tracheobronchial lymph nodes. Lymph nodes fixed in 10 % neutral formalin. After fixing we adhered to the classical scheme of washing, dehydration, imbibition with a xylol, paraffin and preparation histologic sections on the microtome. Histologic sections of lymph nodes painted hematoxylin and eosine, azure-II-eosine, trichromatic paint on Masson.

The morphometric analysis of structures of a lymph node was carried out by means of a morphometric grid and the Image-Pro Plus 4.1 program. Statistical data processing was performed with licensed statistical software package StatPlus Pro 2009, AnalystSoff Inc. Data were expressed as average arithmetic with definition of a standard (mean square) error. Belonging to normal distribution was defined when calculating criterion of Kolmogorov-Smirnov and the accompanying indicators. A P-value < 0.05 was considered statistically significant.

The theory of lymphoid aging is connected with an immunogenesis problem [5, 8]. It does necessary studying morphological manifestation of the immune response from peripheral lymphoid organs. It is known that regional lymph nodes are organs of lymphatic system, and lymph nodes possess transport and drainage function and high immune activity [1, 3, 6]. At natural (physiological) aging of involution of lymphoid tissue the stage of the maximum development of compartments of a lymph node precedes that corresponds three-month-old of young rats of Wistar [3, 6]. The indicator of a ratio of T- and B-zones makes more than unit at three months age of young rats, building a progressive row of lymph nodes: tracheobronchial – inguinal – mesenteric (Figure). Each of these lymph nodes differs with extent of development of structural and functional zones. Involution of adenoid tissue leads to structural destabilization of regional lymph nodes at old rats of Wistar. A ratio of T- and B-zones in lymph nodes of young (3 months) and old (1.5 years) white rats of Wistar and OXYS

It is clear, there is a redistribution of the immunoactive compartments which are responsible for the immune response in lymph nodes of different lymphatic regions with age [3, 9]. A morphdynamics of natural aging in lymph nodes carries the region-dependent character. The obtained data prove implementation of the principle of a regional dominant according to the concept of the lymphatic region [2, 3].

Other morphological picture is observed in lymph nodes of premature aging of OXYS rats. Changes of lymphoid tissue are characterized more rapidly development without achievement of the maximum development of compartments. We observe various ratios of the areas of functional compartments in regional lymph nodes in premature aging of OXYS rats. The greatest changes are noted from T- and B-zones of lymph nodes. These zones are responsible for forming of the immune response on cellular and humoral type. The coefficient of a ratio of T- and B-zones less than unit also demonstrates prevalence in structure of lymph nodes a thymus-independent area at of OXYS rats at three-months age (Figure).

Indicators of structural and functional zones of lymph nodes are various at three-months age of OXYS and Wistar rats. We noted the following changes in lymph nodes of young rats of OXYS (Tables 1-3).

The coefficient of a ratio of T- and B-zones remains low size in inguinal and mesenteric lymph nodes and increases in a tracheobronchial lymph node when aging by 1.5 years (Figure). It is connected with regress of the main structural and functional zones (a paracortex, lymphoid follicles) at expansion of medullary substance in lymph nodes of different lymphatic regions. Nevertheless, the T-zone dominates in a tracheobronchial lymph node that defines the immune response of cellular type.

Lymphoid follicles and medullary cords are a part a thymus-independent zone and differ at rats of OXYS from those at Wistar by the end of life. Premature aging leads to progressive reduction of the area of lymphoid follicles with the germinative center in an inguinal lymph node in 7.1 times, in mesenteric in 12.3 times, in a tracheobronchial lymph node in 16.1 times, up to their disappearance (Tables 1-3).

Lymphoid follicles are intended for performance of lymphopoietic function, filling up with lymphoid cells a lymph node. Cells of lymphoid follicles participate in forming of humoral immunity. Reduction of lymphoid follicles with the germinative center indicates decrease the immune response on humoral type. Increase of medullary substance at reduction of the area of a medullary sine is characteristic of OXYS rats lymph nodes. There is a noticeable thickening medullary cords to exposure of a reticular skeleton and their distribution on the most part in structure of a lymph node, turning it into a B-cellular zone. Changes of the structural organization of lymph nodes are the morphological sign of decrease immune protection progressing in process of aging at rats of OXYS.

Structural and functional zones of the inguinal lymph node of OXYS and Wistar rats during the different age periods, %

Structural and functional zones of the mesenteric lymph node of OXYS and Wistar rats during the different age periods, %

Structural and functional zones of the tracheobronchial lymph node of OXYS and Wistar rats during the different age periods, %

Lymphatic regions is a part of the general protective system of an organism. Lymph nodes are the leading element of the region [3, 9]. Aging affects structure and functions of lymph nodes. The morphological option of the structure of a lymph node depends on localization and an originality of contact with external environment. A certain influence on structure and function of lymph nodes renders age of animals. Age changes of lymphoid tissue were various at Wistar and OXYS rats at natural and premature aging respectively.

Structural and functional zones of lymph nodes reach the biggest development in young rats of Wistar. Genetic the defect in rats of OXYS constrains development of peripheral lymphoid organs. It leads to reduction of structures of cortical substance and expansion of medullary substance. Reduction of a paracortical zone can be an example of a morphological equivalent of decrease of the activity of the T-cellular immune system. First of all it is connected with early involution of a thymus gland [10].

The structure of lymph nodes of OXYS old rats does not provide a drainage and the immune status of the lymphatic region. It increases risk of developing pathology. It should be considered by search of means of correction of senile changes of lymphoid tissue for increase of nonspecific resistance.

Morphodynamics of compartments of lymph nodes of different localization has distinctions at natural and premature aging. The imbalance of a ratio of T- and B-zones characterizes depression of function of lymph nodes depending on localization and age. The general is minimization of structures of cortical substance and increase medullary substance of lymph nodes. Changes of compartments sizes lead to forming of the immune response of humoral type for mesenteric and inguinal lymph nodes and the immune response of cellular type for the tracheobronchial lymph node. At the same time at rats of OXYS the aging happens the accelerated rates and regressive changes of lymphoid tissue are available already for young animals. The age-caused imbalance of compartments of a lymph node can be considered as a predictor of premature aging and as risk of developing pathology. Features of morphology of lymph nodes give the grounds to consider of OXYS rats as universal model of immune insufficiency for studying pathogenesis and development of correction methods.