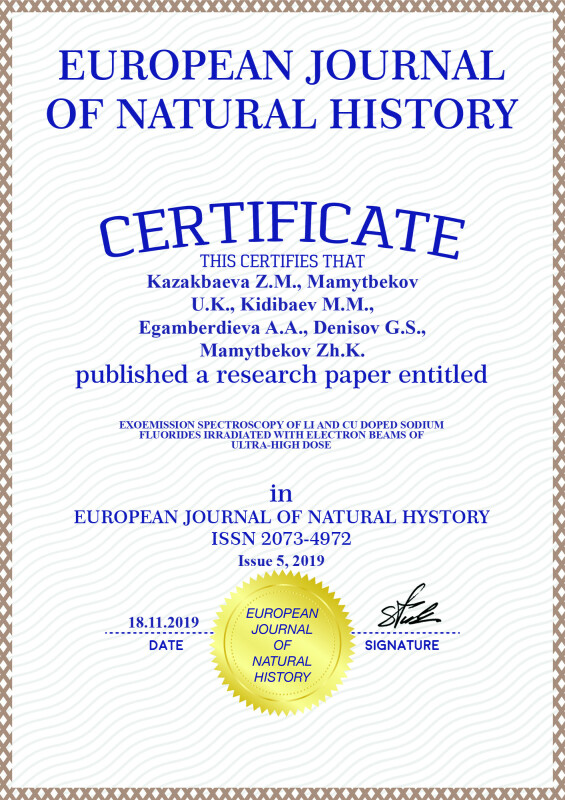 Nowadays, we observe rising demand for high-level TL dosimetry materials due to the development of new radiation technologies applicable in materials testing, sterilization and processing, nuclear medicine, etc. Some of them are based on using electron and ion beam facilities as irradiation sources. It was recently shown that LiF based TLD may be prospective for application in extremely wide dose range of up to twelve orders of magnitude ([1-3]. This inspired us to test thermally stimulated processes of NaF and LiF doped with Li and Cu irradiated with ultra-high dose of electron beam.

Termostimulated luminescence (TSL) is a very sensitive indicator of defects in non-metallic crystals. For dosimetric measurements it is possible to empirically select the material with high radiation sensibility and stability, therefore many dosimeters exist which are based on various substances. A great number of dosimeters are based on sodium fluoride with different admixtures. A very important sub-discipline of dosimetry is the dosimetry of super-high doses, especially at low temperatures.

The work [1, 4] proposed the working substance, which can be used for accumulation of dosimetric information at room temperature. For reading such information, a method of termostimulated exoelectron emission (TSEE) is used. The drawback of such a working substance for TSEE dosimetry is that it is applicable only for registration of low-energy electron radiation up to 150 keV [5-7]. Its application for TSEE dosimetry of higher energy electron radiation (up to 10 MeV) is still not known. There are many different thermo-stimulated dosimeters operating at different temperature conditions and with different types of ionizing radiation [8, 9]. At low temperatures, the sensibility of TSEE dosimeters is higher than that of TSL that is why the former are used more often. The crystals of sodium fluoride with various additives are used as such dosimeters.

To improve properties of TSL dosimeters developed on the basis of basic matrix NaF:Cu, a new working substance was created for TSEE dosimetry of high-energy electron radiation (up to 10 MeV) at high-dose radiation loads (up to 2 MGy). Such a substance should have the increased intensity of TSEE peaks, increased integral output of exoelectronic emission, and, respectively, a heightened sensibility of a dosimetric tract for reading in the dosimetric information.

Our researches of exoemission activities (during thermal stimulation) of a number of new compositions of a type of NaF+activator (except for activator U, which leads to many TSEE peaks), showed very high emission activity of NaF:Cu and NaF:Li,Cu compositions. This fact opens up the prospect of creating on their base new efficient thermoelectronic sensors for high-dose dosimetry of electron beams with energy of 10 MeV.

Studied crystals were grown in air [10] by the Kyropoulos method in in a platinum crucible from NaF of special purity. The melt was doped with 1.0 mol % of Li and 0.1 mol % of Cu. The grown crystals had a cylindrical form having several centimeters length. To measure TSEE, the crystal plates of standard size 5x5 mm were punched of these crystals.

All samples of sodium fluoride with impurities were irradiated by 10 MeV electron beam on the electron accelerator (microtron) at the Department of Experimental Physics UrFU. The target with samples in a form of plates was located 3 centimeters from the exit window of the accelerator. At that distance, the samples received a dose of 15-16 kGy per minute, which was determined using standard film dosimeters of a type SO PD(F)R-5/50. Since such film dosimeters (based on a copolymer with a phenazine dye) are suitable for measuring the doses only up to 50 kGy, higher doses of samples irradiation, the doses of 0.75 and 2 MGy, were provided by selecting necessary exposure time: 50 and 133 minutes.

The TSEE measurements were performed on the automated exoemission spectrometer in vacuum of ~ 10-4 Pa, which has a thermostimulation channel providing linear heating of samples in a range of 25–530 °C in a standard heating rate range of 0.1–1 degree/s. For electrons detection, the vacuum electronic multiplier VEM-6 was used. The spectrometer has a computing control system made in the CAMAC standard [11].

In the case of crystals NaF:Li,Cu in Fig. 2 the band at 237 °C remains dominant in TSEE curves (it consists of two bands at 226 and 251 °С), its intensity significantly increases from 10 000 to 30 000 relative units. The intensity of a higher TSEE temperature peak of NaF:Li,Cu crystals at 338 °С is no more than 25 % relative to the intensity of the main TSEE peak at 237 °С. Thus, the composition of NaF:Li may be of interest as the working substance for TSEE dosimetry (of high energy and high doses), having a position of the main TSEE peak at 237 °C. The effects of higher-dose electron radiation, namely of 2 MGy were verified for NaF:Li,Cu crystals. The curves of TSEE are shown in Fig. 3. At a dose of 2 MGy, in curves TSEE the intensive band is observed shifted (compared to the dose effect of 0.75 MGy) in area of higher temperatures: 250–350 °C with maximum at 330 °C. It is stipulated by a number of traps associated with TSEE peaks at 281, 303 and 330 °C. Thus, at high doses of electron irradiation in NaF:Li,Cu crystals, the traps are repopulated in favor of a deeper one which is responsible for a high-temperature band at 330 °C. Small traps (TSEE bands at 195 and 218 °C) are weakly manifested during thermal stimulation; their share in TSEE does not exceed some percent.

The experiments have shown that the crystals of NaF:Li,Cu are not convenient enough in practical terms for registration of doses of radiation exposure (2 MGy) due to a high-temperature position of a TSEE peak (330 °С, Fig. 3) because they require additional time for dosimetric information reading.

However, they seem to be more convenient TSEE sensors in practice when registering moderate doses up to 0.75 MGy because dominant TSEE bands are located almost a hundred degrees lower at 237 °C. The dosimeter [12] based on sodium fluoride with lithium and copper admixture has one rather intense peak of thermo luminescence (Fig. 4). The peak is at 198 °C. The fading is quite small: the peak intensity decreased by 9.7 % for 28 days. The linearity is from 500 kGy to 2.5 MGy. In conclusion, well-defined and regular-shaped single crystals of NaF:Li, NaF:Li,Cu, NaF:Cu were successfully synthesized using the Kiropoulos method and irradiated with ultra-high dose electron beams of 10 MeV. All the samples revealed good radiation resistance and sensitivity to the irradiation doses applied. The results of TSEE and TL measurements suggest complicated structure of defects in the crystals that can hardly be modelled with the commonly applied model of first-order process. In connection with the observed TL and TSEE glow curves, it is possible to tentatively propose application of the crystals for application in ultra-high dose TL and TSEE dosimetry. This proposition, however, should be further supported by in-depth investigation of TL and TSEE response of the crystals depending on dopant concentration, dose and energy of electron beams.

We express gratitude to Prof. Shulgin B.V. for the organization of the experiment and the discussion of the results.