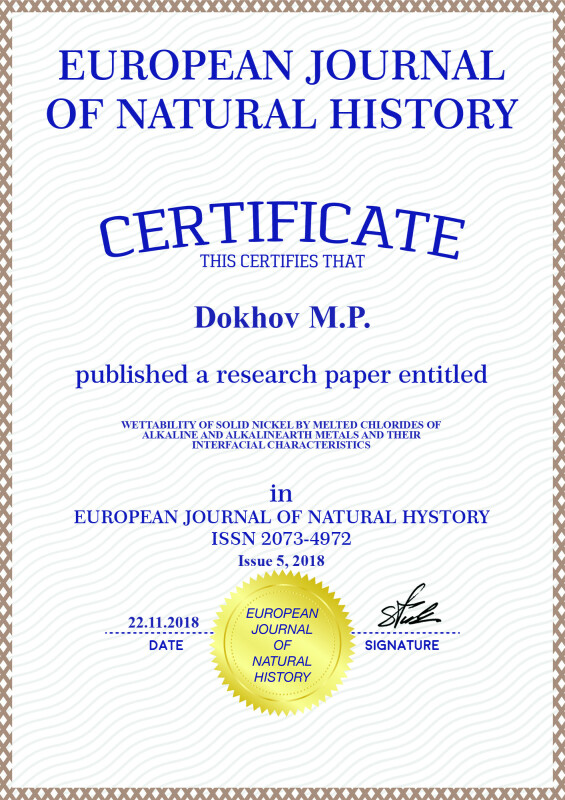 Article in PDF
1876 KB
The purpose of this paper is to calculate interfacial energy between salt melting and solid nickel. The interfacial energy of nickel in contact with various salt melting were evaluated at the various temperatures. We previously developed the thermodynamic theory which allows to calculate the interfacial energy at the boundary between proper melting with the solid body. Based on this theory we determined the interfacial characteristics of many organic and inorganic compounds and several metals. But this theory gives good results only with low-energy surfaces, since there is problem of accounting for the temperature factor. It is necessary to bring the surface energy of a solid body in accordance with the temperature at which the measured contact angle. This theory allows of determine the magnitude of the surface energy of a solid body at the melting temperature. Data of surface liquid energy and contact angles are taken from the literature. In the conclusion, it should be noted that our method of calculation can be also adaptable to the investigation of other solid-melt systems.
wettability
contact angle
nickel
interfacial energy
1. Digilov R.M. Measurement of the surface tension of refractory metals in the solid state / R.M. Digilov, S.N. Zadumkin, V.K. Kumykov, Kh.B. Khokonov // Physics of Metals and Metallography. – 1976. – Т.41. – №5. – P. 979-982.
2. Dokhov M.P. Changes in the interfacial energy of the solid body-melt and solid body-pairs, depending on the edge angle. Ed. Journal of Izv. Vuzov. Physics. – Tomsk: VINITI, 1985. – 12 p.
3. Dokhov M.P. On the relative values of the surface energies of metals at the triple point. // Metals. – 1994. – No. 2 – P. 16-21.
4. Dokhov M.P. Calculation of the interphase energy of some organic compounds at the interface of a single crystal-melt // ZHF. – 1981. – 55. – No. 5. – P.1324-1327.
5. Naidich Yu.V. Contact phenomena in metallic melts. Kiev: Naukova Dumka, 1972. – 196 p.
6. Nizhenko V.N. Surface tension of liquid metals and alloys (one- and two-component systems) / V. N. Nizhenko, L.I. Floka. Directory. – M.: Metallurgy, 1981. – 208 p.
7. Smirnov M.V. Wetability of solid materials by molten chlorides of alkali and alkaline earth metals in an atmosphere of argon and chlorine. / M.V. Smirnov, V.P. Stepanov, A.I. Rodionov, A.A. Aleksandrov, A.Ya. Korkin. Research methods and properties of interfaces of contacting phases. – Kiev: Naukova Dumka, 1977. – P.121-124.
8. Chadwik G.A. Solid-liquid interfacial energy // Interfaces conference, Melburne. The Australian institute of metals. – Butterworths, 1969. – P.101-113.

The interphase energy between a solid and melts has a significant effect on the transport of matter across the electrode-electrolyte phases boundary. In metallurgy, the dependence of wetting on the droplet size obtained by the electrolysis of melts of liquid metals, the destruction of the lining of electrolysis baths, the appearance of an anode effect, etc. is known.

However, despite the significant role played by the interfacial energy at the solid-liquid interface (melt) in various fields of science and technology, so far there is no direct method for measuring this quantity. Therefore, unfortunately, we have to resort to semi-empirical methods for its determination. Moreover, it is seldom in the literature that in the same work a complex measurement of all the necessary quantities is carried out simultaneously to find the interfacial energy at the solid-melt (liquid) boundary of another substance.

To write this article, we were able to find in the literature the necessary quantities for calculating the interfacial energy of solid nickel at the boundary with the chlorides of alkali and alkaline-earth metal chlorides in various environments [7].

In the present paper we used thermodynamical formulas obtained by us earlier to determine the temperature coefficient of the nickel surface energy ΔσSV/ΔT [4]:

From the known values of σLV and θ, formulas (1) and (2) make it possible to determine σSV at the melting temperature of the metal.

First, from the literature we find one experimental value of σSV of nickel, measured at a temperature different from the melting point, then we calculate the σSV of nickel by the formula (2). The difference between the surface energy calculated and measured by the values of ΔσSV, related to the temperature difference at which the surface energy of nickel is determined, made it possible to determine ΔσSV/ΔT.

Due to the fact that the nickel wetting angles with alkali and alkaline-earth metals were measured at temperatures much lower than the melting point of nickel, the surface energy of solid nickel was recalculated by us for the temperature at which θ1 was measured.

Direct measurement of the edge angles of solid metals by intrinsic melts with high melting points is a difficult task. With this circumstance, apparently, the absence in the literature of the experimental data θ1 is connected. Earlier, we calculated the edge angles of solid metals with our own melts, including for nickel, which turned out to be equal to θ1 = 21 ° [3]. It was found that the calculated values of σSL for single-component systems correspond to the criteria for wetting low-energy surfaces by low-temperature liquids under equilibrium conditions. As is well known, the interphase energy in equilibrium systems depends on the difference and structure of the contacting phases and decreases when their properties approach. For example, for two phases of different polarity, the interphase energy will be the lower the lower the polarity difference of these phases (P.A. Rebinder’s polarity rule).

Eremenko V.N. expressed the principle according to which similar wetting is similar, the meaning of which, in the opinion of some researchers, is that the interphase energy between such substances is low (V.N. Eremenko’s principle of similarity).

Indeed, studies, including ours, show that for the one-component systems and for dissimilar low-energy surfaces, when they are wetted with low-temperature liquids, the “like-so-so-like” principle is valid.

For the contact of high-energy surfaces with low-temperature liquids, good wetting does not guarantee a strong decrease in the interfacial energy. At the same time, in systems where simple contact is the only source of interfacial energy reduction, the establishment of a connection between a solid and a wetting liquid can be disturbed by the presence of contamination films that interfere with perfect contact. Such a metal-film-melt system remains stable, since there is no tendency to transition and to the exchange of atoms between phases, since their chemical potentials are equal.

A different situation is observed in interacting nonequilibrium systems. For such systems, in addition to a purely contact process, the interfacial energy can decrease as a result of the interfacial interaction-the diffusion of one of the components of the wetting liquid from the surface layer into the volume, the dissolution of the metal in the liquid, etc., i.e. from the flow of irreversible processes of chemical interaction at the interphase boundary [5].

The authors, whose values of the boundary angles are used by us, for their calculations note that the measured wetting angles on nickel in the chlorine atmosphere may not correspond to the thermodynamic equilibrium state of their surface, since during the experiment a continuous process of their oxidation with chlorine occurred to form chlorides that did not accumulate on the their surfaces, but dissolved in salt melts, diffusing from the surface layer to the volume. In calculations such angles were used by us, considering them as contact angles, as is customary in terminology.

The value of σSL of nickel obtained by us is in agreement with the experimental data given in the review paper [8], found by the method of supercooling small drops.

The calculated σSV of nickel also agrees with the experimental value of σSV, measured by the zero-creep compensation method [1]. The value of the surface energy of solid nickel σSV(Ni) = 1940 mJ/m2 obtained by the authors at a temperature T = 1670 K, which is below the melting point by 58 K.

From the two found values of σSV of nickel, we calculate the temperature coefficient of the surface energy of solid nickel

In the literature, instead of Δσ/ΔТ, dσ/dТ is usually written, which, in our opinion, is not correct.

The values of the temperature coefficients are small, but finite. Their recording in a differential form a priori means that they are infinitesimal. Therefore, the differentiation of the surface energy with respect to temperature must be done by replacing the dots of the differential d, the Δ (delta) and the final result in terms of Δ.

In double and multicomponent liquids and solids positive, negative and even zero temperature coefficients (so-called temperature buffering) are possible.

Table shows the angles of wetting of solid nickel by molten salts and their interfacial characteristics at different temperatures.

From Table it follows that as the temperature increases, σLV and WA of all compositions of salt melts decrease linearly. The σSV and σSL are also decreased in a given temperature range. Salt melts well wet the nickel, but a sharp decrease in the interfacial energy is not observed.

In the absence of a similarity between the wettable solid and the wetting liquid, good wetting is possible only under the condition σSV > σLV. In this case, θ < π/2, and in the case σSV < σLV, θ > π/2.

In calculating the phase-to-phase characteristics, we used the surface energy values of the molten chlorides of alkali and alkaline-earth metals, measured by the maximum pressure method in a gas bubble (argon or chlorine) [7]. The authors presented the results of the temperature dependence of sLV as an empirical equation with the help of which we gave the values of σLV to the temperatures at which the angles of salt melts on solid nickel were measured. The edge angles presented in Table are rounded to the whole. The calculated values of interphase characteristics are also rounded up to integers of measure unit.

for self-testing and to avoid possible errors

It should be noted that the ratio (4), called the Dupre equation,expresses the fact that the change in the free energy of the system during its transition from one state to another as a result of the reversible isothermal process is equal to the difference in the free energy of the system in these two states. It directly follows that the increase in the binding energy of a liquid and a solid causes a decrease in the interfacial energy between the solid and the liguid. In particularlу, the latter position is confirmed by our calculations.

On the same basis described above, the energy release during the reaction between the solid and the liquid can be equated with the work of adhesion. This position was also taken into account in the calculations of interfacial energy in systems in which the contact angles were measured under the atmosphere of chlorine.

According to the data of the authors of [7], this angle at 932 K is equal to θ = 12 °. Using formula (1) and the value of σSV of nickel at the melting temperature found above, we obtain

(recall that with decreasing temperature, σSV increases). Similarly, at a temperature of 932 K, it is necessary to bring the surface energy of the LiCl melt. For this purpose, we use the empirical equation obtained by the authors of [7].

Substituting these values in (7), respectively, we obtain:

Similarly, we find σSL in a chlorine atmosphere

Calculations for other salt systems are carried out according to the same scheme.

In conclusion, we note that the calculation method presented here is applicable to the evaluation of interphase characteristics and other solid-liquid systems.

1. The interphase energy σSL and the surface energy of solid nickel σSV at the melting point are determined.

2. The surface energy of solid nickel is reduced to the temperatures at which the edge angles of salt melts on nickel are measured.

3. Interfacial energies and work of adhesion of molten chlorides of alkali and alkaline-earth metals to nickel were calculated.

4. It is shown that, in the absence of similarity between the wettable solid and the wetting liquid, a low value of the contact angle is not a prerequisite for a sharp decrease in the interfacial energy at the solid-melt interface of another substance.