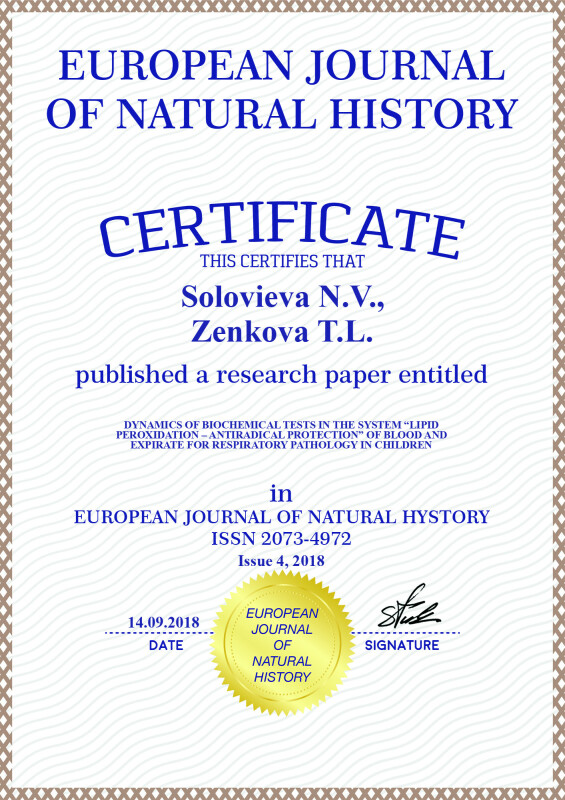 Free radical oxidation and generation of reactive oxygen species (ROS) are the processes inherent in the metabolism of any living organisms. ROS are formed during the normal aerobic respiration of mitochondria with the “respiratory explosion” of phagocytic cells in the process of arachidonic acid metabolism and the autooxidation of catecholamines.

In norm ROS are necessary for many important physiological and metabolic processes in the body such as regulation of intracellular processes, metabolism, accumulation and biotransformation of energy, enzymatic catalysis, transfer of information, gene expression, cell division, immune and adaptive responses [20, 18]. ROS generated by phagocytes are very significant in protecting the body from foreign objects and having a microbicidal effect. Thus, generation of ROS is an important protective mechanism underlying the nonspecific immunity. Also ROS take part in the reactions of detoxification of xenobiotics, biosynthesis of biologically important molecules, etc. [20, 18].

It is well known that ROS are chemically highly active particles reacting with a wide variety of substances. Therefore many biologically significant components of living tissues such as lipids, proteins, nucleic acids, carbohydrates can be easily undergone by oxidative modification. Due to the high reactivity ROS can irreversibly damage such biologically important molecules as DNA, RNA, proteins, lipids which lead to disruption of the structure and function of biomembranes, destruction of various cells and tissues [18].

Thus, on the one hand oxygen is the main source of metabolism of aerobic organisms, a source of metabolic energy. On the other hand, oxygen is the source of the ROS. Therefore “the high oxidizing ability of oxygen is necessary for its functioning in the respiratory system, from the good turns into the evil if to take into account the possibility of “parasitic” chemical reactions of oxygenation of various substances of a living cell”. [20].

The formation of ROS is a delicate process, regulated by the body. Living systems have a deeply echeloned antioxidant defense system (AOP) which maintains the concentration of ROS at a stationary safe level. Functional deficiency of AOP leads to the break of the avalanche of the ROS which causes violation of protective and regulatory functions, bioenergetic processes, cell proliferation, and induction of apoptosis. Besides highly toxic ROS cause carcinogenic and mutagenic effects [13].

The excessive activation of free radical oxidation is a typical pathological process that occurs with a variety of damaging effects on the body and diseases. The excessive production of ROS especially in combination with a lack of compensatory capabilities of antioxidant defense systems can lead to the development of new and / or exacerbation of already existing pathological changes in the body. Consequently, the damaging effect of ROS is a significant factor in the development and progression of various diseases [13, 14].

The imbalance in the system “oxidants – antioxidants” caused by the excessive increase in ROS production and / or a decrease in AOP activity contributes to the development of oxidative stress (OS). It should be noted that today the OS is considered as a nonspecific pathological process accompanying almost any disease. OS plays the most important role in the molecular mechanisms of the pathogenesis of lung diseases that associated with anatomical and physiological features of the respiratory system, as well as exogenous and endogenous activation factors of free radical processes (FRP) in the respiratory tract.

From the point of view of the possibility of the free radical oxidation processes, the respiratory system occupies a special place [1, 2, 7, 11, 12, 13, 19]. In the lungs the tissues interact directly with oxygen – the initiator and oxidation participant, which penetrates the membranes of the alveoli. Pulmonary tissue is rich in unsaturated fatty acids which are a substrate for lipid peroxidation (LPO). Alveolar macrophages and other phagocytes in inflammation, action of dust particles and various pollutants are activated and released ROS initiating LPO. The peculiarity of the functioning of the lungs is the constant direct action of the oxygen medium on the elements of the lung tissue with the substrate and oxidation initiators [1, 2, 7, 11, 12, 13, 19].

The main types of reactive molecules generated in cells include ROS, active forms of nitrogen and their derivatives. ROS include superoxide anion radical (O2-), hydroxyl radical (OH), peroxyl radical (HO2) and alkoxy radical (RO). In the process of chain reactions such derivatives of ROS as hydrogen peroxide (H2O2) and lipid peroxides (ROOH) are formed. ROS include nitric oxide (NO) and peroxynitrite (ONOO-) [13].

The inflammatory cells in the lungs release a superoxide anion forming hydrogen peroxide by means of superoxide dismutase or spontaneously. These ROS can themselves take part in the modification of macromolecules. Besides they produce stronger oxidizers – NO, hypochlorite, peroxynitrite which are capable of damaging proteins, lipids, nucleic acids. The oxidative modification of proteins causes the appearance of antigenic properties. The oxidation of lipids leads to the appearance of chemtractants increasing the migration of phagocytes to the place of their formation. Thus the activation of phagocytes can spontaneously growth and form the “vicious circle” in the lesions [14].

Taking into account the mechanisms of initiation and features of development of FRP in lung diseases as well as the ways of their correction for the purpose of effective pathogenetic therapy, it is necessary to determine the oxidative status of the patient for each specific disease and prescribe antioxidant agents, influencing the specific links of the processes of free radical oxidation.

Bronchopulmonary impairments occupy one of the leading places in children morbidity at any age. They have a special importance due to its prevalence and frequency of manifestation for Transbaikalia with its climatic and natural specificities. The direct contact of the respiratory mucous membrane and the environment with a large number of damaging factors (bacteria, viruses, smoke, dust, toxic gases) stimulates the development of various reactions – inflammatory, allergic, irritative, etc. Current pathology as the genesis of most diseases is based on the essential role of free radical activation processes. Their intensification causes an imbalance in the “LP – antiradical protection (ARP)” system and influences the character of pathological shifts [20, 13, 14, 18].

Bronchoalveolar lavage and lung biopsy should be empathized among the methods of bronchial examination. But their use is limited due to the presence of certain deficiencies. Studies of the exhaled air condensate (EAC) as a medium reflecting the state of metabolism in the respiratory system and in the body as a whole are widely put into the clinical practice [1, 2, 7, 11, 12, 9, 10, 21]. The expirate use gave the possibility to estimate the intravital state of the damaged respiratory organs in children [3].

The materials for the study were EAC and blood serum. The expirate collection was performed according to the method of G.I. Sidorenko [16]. The following parameters were studied in the condensate: total lipids (TL) [5], acylhydroperoxides of lipids [6, 10], substances reacting with thiobarbituric acid or TBA-active products [15], antioxidant activity (AOA) [6, 10]. In the blood serum total lipids were determined using the “Bio-Lachema-Test” kits, acylhydroperoxides of lipids [8], TBA-active products [6, 10], and AOA serum [16].

The processing of the results was carried out by the method of variational statistics, Student’s t test and correlation analysis. Statistical calculation of all parameters was performed with the computer.

Many non-respiratory functions of the lungs assume their intensive involvement in the lipid metabolism [19]. We registered an increased elimination of TL with vapors of the exhaled air. Thus in ARVI this indicator was increased by 17.3 %, in case of ASB by 49.6 % (p < 0.001), in acute pneumonia (AP) – by 107.1 % (p < 0.001), that confirms the intensification of destruction processes in surface-active phospholipids in the alveolar lining. This increased parameter was differed in RB – by 75.2 % (p < 0.001) and in AB – by 88.0 % (p < 0.001) from the control values. The content of acylhydroperoxides of lipids in the exhaled moisture during clinical manifestations was 112.3 % in patients with ARVI, 169.1 % with ASB, and 204.0 % with AP. The same indicator in the stage of exacerbation of RB increased to 184.6 %, and AB to 205.1 %. The content of TBA-active products increased more in comparison with the initial products of LP. Thus its increase in ARVI was 66.9 % compared with the control, in the case of ASB by 103.6 % and in the height of the pneumonic process by 270.5 %. This indicator increased in RB by 231.6 % and in children with AB by 307.6 %. The reconvalescence period of all nonspecific lung diseases (NLD) forms was characterized by the decreased values of these parameters except patients with AB. The increase (66.1 %) of TBA-positive material was observed in these patients in comparison with the stage of exacerbation. However biochemical normalization of lipid peroxidation parameters was registered during this period only in ARVI. The performed studies of condensate showed that the activation of lipid peroxidation processes, depending on the form and period of the disease was marked both in acute and recurrent respiratory diseases in children.

The antioxidant activity of expirate decreased at the peak of the disease by 27.9 % in patients with acute respiratory viral infection, by 32.9 % in persons with ASB and by 13.3 % in patients with AP. It was reduced greatly in RB and AB to 48.7 % and 44.9 % respectively, relative to the control figures. The AOA level in children with ARVI, ASB, RB and AB during the stagnation of clinical manifestations wasn’t changed significantly. In AP despite clinical radiologic repair there was a decrease of this parameter in 2 times compared to the peak period. The lowest values of antioxidant activity in the remission phase were established in patients suffering from AB.

The shifts of peroxide homeostasis in the blood serum had similar parameters as in the EAC. However the intensification of free radical processes at the level of the body was less expressed than in exhaled air vapors.

Thus at the peak of clinical manifestations, the content of acylhydroperoxides of lipids increased by 1.3; 1.4; 1.6 and 1.9 times in patients with ARVI, ASB, RB and AB respectively. In AP the increase of serum acylhydroperoxides of lipids was registered at 140.5 % compared with the control. The growth of TBA-active products in the blood in acute respiratory diseases was in the range from 39.2 % to 243.2 % compared to the healthy people. In RB and AB it was 241.9 % and 317.6 % respectively. There were no significant differences between the above indicators in various stages of the disease in all forms of bronchopulmonary pathology.

The total antioxidant activity of blood serum in children with ARVI remained within the normal range. In case of ASB this indicator was reduced by 5.0 % and the development of pneumonia caused its fall by 24.7 % relative to normal values. For patients with recurrent respiratory pathology this parameter decreased by 35 % for both nosological forms. AOA fluctuations at the periods of convalescence and remission were unreliable in all subjects.

A comparative analysis of the above data showed the advantage of studying the components of the “LP-antioxidant” system in EAC in comparison with the same data in serum. Among all nosological forms NLD with more intensification of free-radical processes in the pulmonary surfactant system was registered in children with AP and AB. It should be noted that the peak of the pneumonic process was characterized by a marked increase in the serum of acylhydroperoxides of lipids compared to expirate. The antioxidant barrier of the lungs was impaired a bit. To our mind this circumstance could be due to the increased concentration of antioxidants in the depot of lung tissue, including α-tocopherol. It forms complexes with unsaturated acyls of surface-active phospholipids, increasing the packing density. It prevents the formation of free radicals lipids. On the other hand the metabolic stimulation of alveolar macrophages stimulates the synthesis of endogenous antioxidants which provides a high antiradical status in the pulmonary surfactant system in the peak of the disease in AP. During the period of convalescence from AP the low level of water and fat soluble pulmonary membrane protectors is not able to provide the organ protection from the destructive effect of LP products. Depletion of the antioxidant reserve of the lungs is associated with uncontrolled consumption of neutralization factors for lipoperoxides and free radicals.

Thus it can be stated that the vapor condensation of exhaled air as a method of diagnosing respiratory diseases is simple, widely available both in polyclinic and at the in-patient department, non-invasive that especially important in pediatric practice.