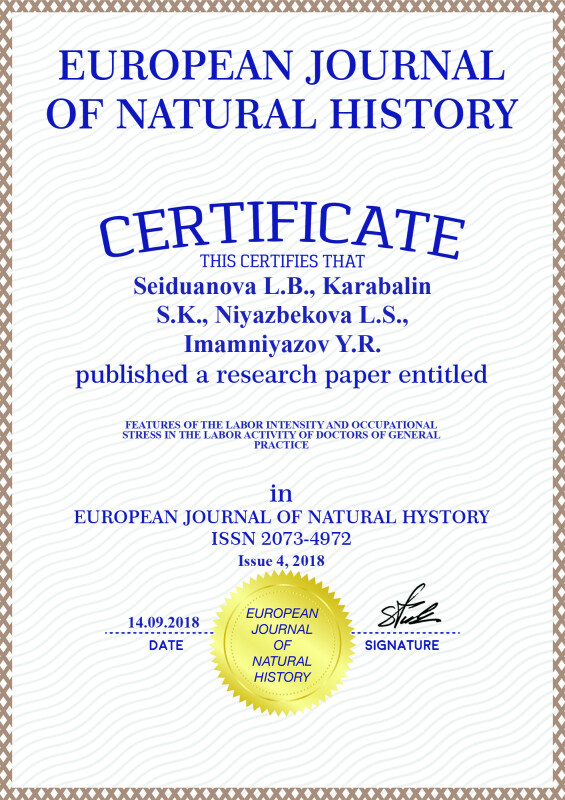 The increase in neuro-emotional loads in the process of labor activity forms a state of stress, and often an overstrain of the functional state of the organism, which can be regarded as the formation of industrial stress [1, 2]. According to WHO / Europe in Europe, 3-4 % of the global burden of disease is stress, related to work [3], and according to Fronberg [4]. About 18 % of all health problems of the working population are stress, depression and anxiety.

This is most typical for the occupations of mental work. Different manifestations of stressful reactions, up to the syndrome of emotional burnout, have been revealed in various categories of workers, primarily social workers, doctors, law enforcement agencies [5]. The labor of medical workers is accompanied by a number of unfavorable factors, among which, in recent years, special emphasis is given to occupational stress, encountered in the work of primary care physicians. The work of the latter is connected with a sufficiently pronounced neuro-emotional tension. Elucidation of the causes and mechanisms of increased emotional stresses in the development of measures to prevent adverse effects of stress [6, 7].

Scientific research on the evaluation of professional burnout in the work of general practitioners (family doctors) in the Republic of Kazakhstan was not carried out, there is practically no information on the development of their professional stress.

The purpose of this work was to assess the intensity of work and the peculiarities of the syndrome of professional burnout among general practitioners of polyclinic institutions in Almaty, depending on the training of family doctors.

The object of the study was the doctors of the polyclinic unit of the State Educational Institution of the city of Almaty, the total number of the surveyed was 66 people, which was divided into 2 groups: 1 group of GP doctors who did not combine the function of obstetrician-gynecologist (36 persons); 2 nd group: GP doctors, combining the function of obstetrician-gynecologist (30 people).

Each group of GP physicians was divided into 3 subgroups, depending on the length of work experience: 1a (seniority up to 5 years) – 14 people), 2a (seniority up to 5 years) – 16 people), 1b – (experience from 5 to 10 years – 11 people), 2b – (length of service from 5 to 10 years – 10 people) and 1b (seniority over 10 years – 8 people), 2b (seniority over 10 years – 7 people). The doctors of the department of narrow specialties of the polyclinic served as a control (28 people). An analysis of the time-length study of labor activity and its structure was performed. A set of factors (stimuli, irritants) was created, creating prerequisites for the emergence of adverse neuro-emotional states (overstrain). The factors (indicators) of the labor process by types of loads were studied: intellectual, sensory, emotional, monotonous, regime loads in accordance with the Manual “Hygienic assessment of factors of the working environment and labor process. Criteria and classification of working conditions”. P2.2.2006-05 [8].

To determine the level of the syndrome of professional burnout (SPB), we used the test of V. Boyko, which diagnoses the level of emotional burnout. The methodology was conducted on a questionnaire containing 84 questions reflecting the phases: “tension”, “resistance” and “exhaustion”. The stages of formation were defined: 1st stage – not formed (36 points or less); 2nd stage – in the stage of formation (37-60 points); The third stage is the formed phase (61 or more).

Indicators of the intensity of the work process for intellectual loads were analyzed (Table 1).

Analysis of the section “The content of work” showed that GPs in the course of their labor activity solve tasks that do not require reasoning, the goal of the work is clearly articulated, many tasks are performed in accordance with the clinical protocol, with the exception of individual cases where the task can include several subtasks.

It should be noted that in GP doctors who do not combine the function of obstetrician-gynecologist, in the process of work decision-making takes place on the basis of necessary and sufficient information on the known algorithm (protocol, instructions), work on this indicator is regarded as 3.1.

Doctors of GP who combine the function of obstetrician-gynecologist, in the process of work, have to take decisions in conditions of incomplete or insufficient information, so the work they have on the indicator “Work content” is regarded as 3.2.

According to the indicator: “1.2. Perception of information and their evaluation”. Labor activity of GPs of the second group of GP requires the perception of information with subsequent complex evaluation of all parameters of the diagnostic process, decisions based on thinking with the obligatory use of intelligence, i.e. mental faculties of the performer, respectively, such work on the strain refers to class 3.1.

On the indicator: “1.3 The degree of complexity of the task”. The work of the GP, an obligatory element of which is the control of the fulfillment of the assignment by the employees of the nurses’ assistants. Such labor is related to class 3.1.

According to the indicator: “1.4 Nature of the work performed”. The work of general practitioners is performed in conditions of time deficit (class 3.1). The greatest tension (class 3.2) is characterized by work in conditions of shortage of time and information. In this case, a high responsibility for the final result of the work is noted.

Analysis of sensory loads showed that the index of the intensity of the labor process (table) – from 2.1 to 2.5 and 2.7 and 2.8 on the degree of tension, labor refers to the 2nd class, and according to the indicator: 2.6. Watching the screen of the video terminal, the stress on the tension refers to class 3.1.

Incorrect mistaken actions of the doctor lead to additional efforts with increasing emotional tension, which is the case with the surveyed persons. The work of general practitioners who combine the function of obstetrician-gynecologist in terms of tension is in class 3.2. According to other indicators, labor refers to 1 and 2 classes.

Considering the dynamics of subjective sensations in the doctors surveyed, it is necessary to note some trends in the change in the indices of the psychophysiological profile. The indicators of the psychological status of GP doctors, depending on the length of service, are presented in Table 2.

As can be seen from Table 2, a violation of the status balance in the mobilization of the mental performance of the contingent under investigation is manifested by various levels of psychological status with manifestations of fatigue.

Evaluation of the psychological status indicates that the subjective feeling of tension is aggravated by an increase in the RT index from the region of low anxiety limits to the range of high anxiety. The increase in this case of RT is most likely due to the experience of doctors, the anxiety of his condition and discomfort.

As can be seen from Table 2, the mean value of the “C” indicator compared to the control is significantly lower in the following groups 2b, 1c and 2c and were 4.12 ± 0.28 units, respectively. (p < 0.05), 4.18 ± 0.36 units. (p < 0.05), 3.39 ± 0.28 units (p < 0.01). The average value of the indicator “A” is significantly lower in the 1c and 2b groups, and the “H” index in the group 2c. The data show that already at the initial stages of adaptation, the professional activity of GP physicians contributes to strengthening the stress of compensatory mechanisms of psychological status. This explains the low values of the “SAN” indicators and its stability below the normative scales.

Analysis of the psychological status of general practitioners with experience of up to 5 years showed that the level of self-assessment of the functional state (C) was low, indicating a reduced performance. Indicators such as activity (A) and mood (H) were also below normal values (table).

Distribution of persons by the phases of development of the syndrome of emotional burnout, in %

With regard to the indicator of personal anxiety (LT), which is understood as a relatively stable individual characteristic: a trait that gives an idea of a person’s predisposition to anxiety, i.e. about his inclination or tendency, as well as the reactive disposition (RT) indicator, according to which the individual’s self-assessment is judged, it was revealed that initially the values of GPs 1a of the group were in the area of low anxiety limits and amounted to: LT-35.1 ± 1.08 units. and RT-34.2 ± 2.2 units, respectively.

With increasing length of service, starting from age 5 and above, the indicators of reactive and personal anxiety in the surveyed persons are increased in comparison with the control. The values of these indicators are in the border area from low to high anxiety, ranging from 34 to 50 points.

The results of the analysis of the phases of emotional stress showed that the phase “Stress” – nervous (anxious) stress is a harbinger and “trigger” mechanism in the formation of emotional burnout, was formed in 18.5 % of GP physicians, in 39.5 % this phase is in the stage of formation, was not generated – 42.0 % (Table 3).

Thus, in accordance with the materials received and the results of the final evaluation, the work of general practitioners who do not combine the function of obstetrician gynecologist should be classified as Class 3 of the first degree of tension, and the work of general practitioners combining the function of gynecologist-obstetrician with class 3 the second degree of tension in accordance with the Guidelines P 2.2.2006-05.

The obtained results testify that the peculiarities of labor activity in the dynamics of work experience among general practitioners contribute to the irrational use of psychophysiological resources in the form of personality properties changes, as anxiety, causing further development of adaptation-compensatory reactions.

The formation of professional stress among general practitioners occurs gradually from the stage of the functional state of stress to fatigue, to overstrain and fatigue, these phases are taken into account for the development of sound preventive measures.