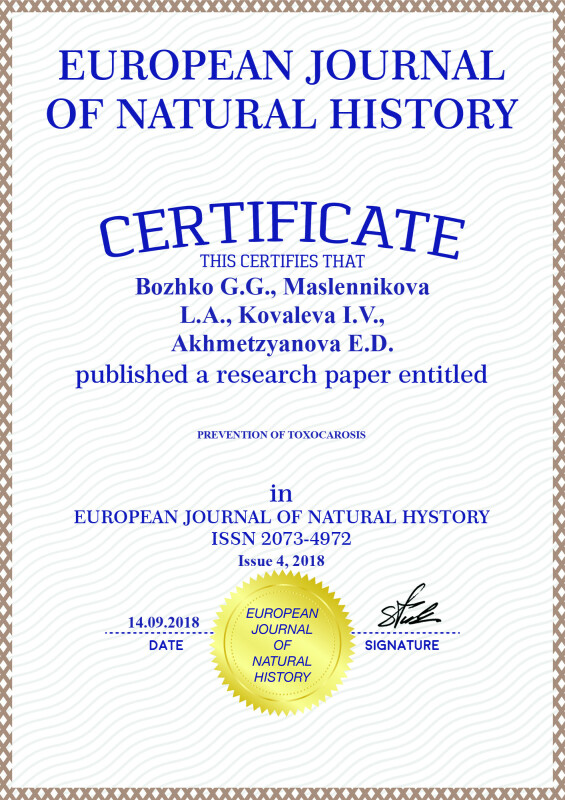 Article in PDF
2336 KB
Toxocarosis is caused by roundworms of dogs and cats Toxoca racanis and Toxocara mystax. There are children under 14 years in the risk group, because usually they have a longer contact with sand, kittens and puppies. Faeces of these animals occurs contamination of soil and sand. During five years we have been conducting a survey on the adjacent territories using the Romanenko method (1996). There were from 40 to 4520 eggs per 1 kg of sand in open sandboxes, accessible dogs and cats, which indicates that the contamination is dangerous. And there were no Toxocara eggs in sandboxes in which the sand was replaced and at night they were closed, this means that such a measure is one of the effective preventive measures of Toxocarosis.
toxocarosis
human disease
contamination of sand
prevention
1. Belimenko V.V., Khristianovskiy P.I. Toxocarosis dogs // Russian Veterinary Journal.Small domesticated and wild animals. – 2014. – No. 5. – P. 50-52.
2. Bozhko G.G., Maslennikova L.A., Goncharova T.A., Nadelyaev V.E. The occurrence of toxocara eggs in the sandboxes of the city // Modern problems of science and education. 2016. – № 4.
3. Chernova T.M., Bulina O.V. Toxocarosis in the practice of a child’s doctor. // Pediatrics. – 2010. – Part 1. – No.2 – P. 119-123.
4. Malysheva N.S., Samofalova N.A., Grigoriev D.G. and others. The problem of toxocarosis in modern conditions and the improvement of approaches to its prevention // Uchenyezapiski: e-journal of the Kursk State University. – 2014. – No. 1 (25).
5. Nabisanova L.A., Zhdanova O.B., Okulova I.I. etc. Toxocarosis of fur-bearing animals and domestic carnivores, hematological indices. // Russian parasitological journal. – 2016. – Part 36. – Ed. 2. – P. 210-213.
6. Polezhaeva G.C., Bartkowa A.D., Borisova O.N., Grebenkova J.C. The Incidence Of helminthiasis of the population of Primorsky Krai / / Pacific medical journal. – 2006. – No. 3. – Р. 51-53.
7. Shcheveleva T.N., Sofyin V.S., Mironova N.I., Karakotin A.A. Toxocarosis, features of epidemiology (review of literature and own research). // Scientific Review. Medical sciences. – 2016. – No. 6. – P. 124-128.

Soil contamination with helmints, and the number of patients does not decrease with years. This situation is shaping up not only in counrtyside, but in the cities too [7]. In cities, the contamination of soil and sand playgrounds in children’s pre-school establishments, parks, yards is due to Toxocara eggs, in most cases. In the different regions of Russia soil contamination is varies from 1-3 %to 50-60 %, with intensity of infestation about1-10eggsfor 100gof soil. The huge contamination of the soil was noted in the territories of kindergartens, schools, courtyards of apartment houses, which creates the prerequisites for a high risk of infection of the child population [4, 6]. There are two toxocara eggs have been detected: Toxocara canis and Toxocara mystax. Mature forms of Toxocara – Toxocara canis, are localized mainly in mammals of the dog family, and Toxocara mystax – in mammals of the feline family. The spread of Toxocara in nature is facilitated by various mechanisms of transmission of the pathogen among animals.Infection of animals occurs with ingestion of eggs with soil particles, intrauterine infection by larvae through the placenta, through the milk of nursing animals and infection by eating tissues of reservoir (paratenic) animals [5].

A number of authors believe that virtually the entire population of the Russian Federation either suffered from or was sick with invasive diseases [1,7], since helminths have a long period of life in the host organism, they release a large number of eggs that can stay in the soil for a long time and retain invasive abilities [5].

Children under 14 years are mostly sick by toxocarosis, who are in close contact with puppies and kittens, they do not observe personal hygiene and swallow Toxocara eggs. Toxocarosis is characterized by a long, severe and recurrent course, polymorphism of clinical manifestations, which is caused by migration of larvae to various organs. Larvae from the small intestine through the mucous membrane penetrate into the bloodstream, then enter the liver and the right side of the heart. Through the pulmonary artery migrate to the capillaries, and then into the pulmonary vein, through the left half of the heart are carried by blood to various organs and tissues, sometimes they only penetrate into the eyes.

The purpose of research: to monitor the changes of the Toxocara contamination level during last 5 years. To check the effectiveness of such prophylaxis method as prevention of contamination by cat’s and dog’s feces on playground.

Sand from sandboxes located in house territories and kindergartens of different Vladivostok districts was examined using Romanenko method (1996). Sand was taken from opened sandboxes and from ones with recently changed sand in it (this also prevents contamination with feces) since June till July during 5 years (2013– 2017). 25 grams samples were taken from a depth of 10 cm from 9 places of this sandbox, combined and examined according to the methodology. The amount of Toxocara eggs was counted on 1 kg of sand and the level of epidemiological risk was determined according to Sanitary-epidemiological Rules and Norms 2.1.7.1287 – 03 “Sanitary and epidemiological requirements to the quality of soils in the territory of populated areas”.

The contamination level among dogs in Russia is 10-76 %, and among the puppies is 100 %, 15-45 % among cats [1, 5]. Daily excretion of eggs by females toxocara is more than 200 thousand, if we take into account that there are many sick animals, the pollution of the environment is very high and it can be millions of eggs every day, in addition, after the walks, the animal hair is also can be contaminated. In the soil, eggs ripen within 7 to 30 days, depending on the conditions, since eggs have several shells, they can maintain their invasive abilities up to several years. Toxocara eggs are more stable that other helmint’s one, that’s why it’s needed to to tighten the sanitary and helminthological control of the territories keeping animals [5]. Human Toxocarosis proceeds for a long time, it is difficult with relapses and polymorphism of clinical manifestations. Various clinical manifestations depend on the migration of larvae and theeir location. Larvae can migrate to lungs, heart, kidneys, muscles, pancreas and thyroid gland, brain, eyes, etc.The number of sick people amoung Vladivostok citizens have been increasing from 5,9 on 100 thousand and there is 77 % of sick among children under 17 years. In laboratory studies of blood serum in 15 % of children, the antibody titer ranges from 1: 800 and higher, which is more likely to indicate a disease. At a titer of 1: 200, 1: 400, it may be a case of visceral toxocarosis or an eye toxocarosis [2, 3]. The number of invased adults and children in the city is quite high. Among all the surveyed sandboxes in five years, the extensive pollution indicator was from 63.6 % to 75.1 % (Fig. 1).

The examination of the sand of the open sandbox of the city showed their high parasitological contamination. There were no Toxocara found in closed with tents and not available for pollution sandboxes. Fig. 2. Number of Toxocara eggs per 1 kg of sand

Sand from the sandboxes, that was replaced or covered with tents to protect against contamination of animal feces, corresponds to the clean category. Consequently, protecting sand from fecal contamination of animals is an effective preventive measure. However, this may not be enough, it is necessary to carry out de-worming of pregnant dogs, puppies, limit the number of neglected animals, set aside special areas for walking dogs and keep them in good hygienic condition, and raise hygiene skills for children when playing with animals.