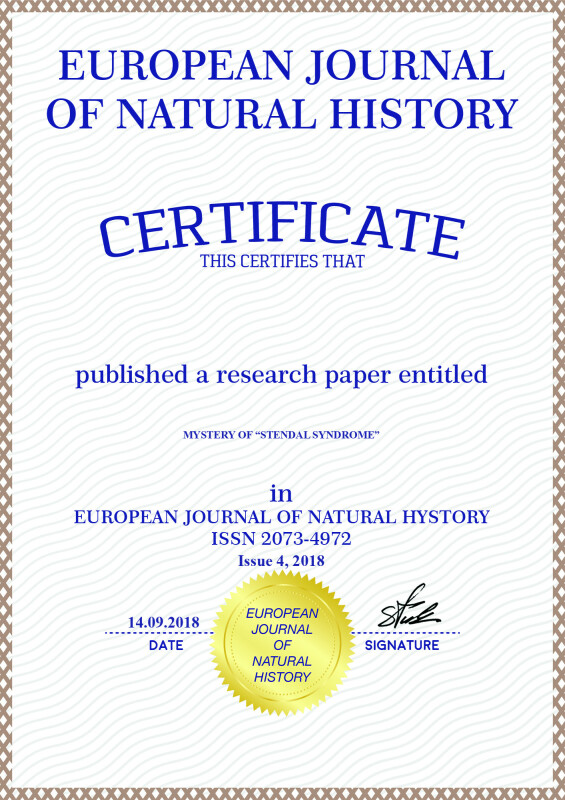 Article in PDF
2137 KB
What is the great force of art? The art is harmony or disharmony? The purpose of scientific research: the study of “Stendal Syndrome” as a paradox of art. Methods: logical analysis, discourse analysis, elements of psychoanalysis, hermeneutic analysis, deduction and induction. In offered research the problem of perception of art is considered. Art is dialogue of Persons. Art is special sensual the world of the person. Art is an activity of the person. The art main task is to reflect and express the sensual world, to raise sincere emotion. In art the truth is a truth of feelings. Art is a dialogue of emotions; therefore to understand art it is correct to read the transferred emotions. Reflecting and expressing the world, art is a struggle against chaos in the human psyche. Art can heal the wounds of the soul! This is the basis of art therapy. Conclusion: “Stendal Syndrome” is a disruption in the transmission of feelings. Art can be an indicator of mental disorders, but the main mission of art is to humanization of personality.
art
psyche
art-therapy “thought-sense”
sense
experience
dialogue
personality
syndrome

The purpose of scientific research: the study of “Stendal Syndrome” as a paradox of art. Methods: logical analysis, discourse analysis, elements of psychoanalysis, hermeneutic analysis, deduction and induction.

What is the great force of art? The art is harmony or disharmony?

“Art is a sphere of feelings of a person in the form of their direct experience. The carriers of emotions in art are images and symbols, which are organized and visualized in material of certain forms. Art approaches the phenomena and objects, not merely for the purpose of representing them, but for raising emotions to stir up feelings a person’s soul” [1].

The great ancient philosopher Aristotle called art “probable existence, an illusion of reality that can evoke the emotional reaction of the viewer” [2, 1451b]. The representative of German classical philosophy G.Gegel pointed out that the aim of art is “to fill the hearts and give a person, developed and undeveloped, to feel all that the human can experience and create in the depths of its Spirit, what secretly excites the Spirit” [3, p. 52]. About the sensitive nature of art, wrote L. Tolstoy, N. Chernyshevsky [4, 5]. J. Delez – French representative of postmodern argues that “a work of art ... is the science of the sensuous” [6, p. 79].

Art affects the human feelings and emotions. But is disharmony possible in the transmission of emotions? In psychiatry there is the concept of “Stendal Syndrome” – this is a mental disorder caused by the impact of a work of art on a person. As a result, there may be symptoms of dizziness, rapid heartbeats, tears, auditory and visual hallucinations.

“Stendal Syndrome” is associated with the name of the great French writer Stendal (1783-1842). Stendal first described this specific symptomatology by visiting the Church of the Holy Cross (the Basilica of Santa Croce) in Florence in 1817 (Stendal “Naples et Florence: un voyage de Milan a Reggio”). Stendal wrote: “When I was leaving the Church of the Holy Cross, my heart began to beat; it seemed to me that I was dying. I thought I had lost consciousness. I saw masterpieces of art born of energy passions. After which everything became meaningless, small, limited. My excitement was great ...”

In 1979, the Italian psychiatrist Gabriella Magerini first described “Stendal Syndrome”. Other scientific researchers are not present.

What is “Stendal Syndrome”? “Stendal Syndrome” is a mental disorder, emotional instability characterized by frequent palpitations, dizziness, sometimes and hallucinations. This symptomatology is manifested when a person is under the influence of works of art; the “syndrome” arises in museums, at concerts of classical music.

“Stendal Syndrome” should be studied in two aspects:

1. “Stendal Syndrome” as a paradox of the psyche.

2. “Stendal Syndrome” as a paradox of art.

“Stendal Syndrome” as a paradox of the psyche: aggression, vandalism, phobias, hallucinations. “Stendal Syndrome” is a form of psychogenic (reactive) psychosis, an acute reaction to stress. Symptoms of the so-called “Stendal Syndrome” may be a sign of a more serious, deep mental disorder. There are several striking manifestations of the “Stendal Syndrome”. This: the aggression to the painting “Ivan Grozny and his son Ivan” (I. Repin), In 1913 A. Balashov made three knife blows on the picture, he shouted: “Enough of blood”! In 2018, this picture was again damaged by a man with a weak psyche. In 1985, there was an attack on the painting by Rembrandt “Danae”. The man caused great damage to the great masterpiece; he cut it with a knife and poured sulfuric acid. The picture was badly damaged. “Danae” was restored for 12 years. There are many such examples.

“Stendal Syndrome” is a hypersensitivity to the art, the disharmony of the senses and the intellect.

Emotions of art are special. A mentally healthy person distinguishes reality from the illusion of art.

The emotions of art are social! They are universal! The artist, the writer conveys not just a sensual image, but a social, typical feeling, something that can lead to a dialogue.

Artistic emotion is filled with meaning. The meaning gives rise to questions: “What”? (What is the object of the image?), “Why”? The relation of the artist to the object; “How”? – manner, style of the artist. And the question: “Who”? – the viewer [9, pp. 437-439]. The Great Russian psychologist and philosopher L.Vygotsky wrote that “art is the central emotion or emotion resolved directly in the cerebral cortex. Senses of art are smart emotions [10, p. 201].

The great secret of art in the unconscious. Here is the sacral meaning of the so-called “Stendal Syndrome”. With a healthy psyche, the unconscious is not isolated from consciousness. There is a stable, active dynamic attitude, cooperation between the conscious and the unconscious. Art is understood and perceived as a fantasy (an unreal world), and not of reality. The unconscious is the “door” to the universe of art. At the same time, the “reasonable emotions” of art should be controlled. L.S. Vygotsky is a “theory of the funnel” for explaining the psychological value of art. “The world seems to be pouring into the wide opening of the funnel with thousands of irritations, instincts, and inside the funnel there is an eternal struggle, but at the same time… Art harmonizes our feelings and Souls” [11, p. 314, 316].

An important aspect of understanding the “Stendal Syndrome” is synesthesia. Art through the unconscious activates all the senses. When dealing with art, a person feels a multi-sensory experience. This theory is well studied by the scientist B.M. Galeev: “art is the main sphere of social practice, where synesthesia dominates [12].

Synesthesia is able to push the boundaries of art and to expand the possibilities of feelings in art. It is known that many Great people in art had the ability to synesthesia-this is Sh. Baudelaire, A. Rimbaud, K. Balmont, A. Scriabin, V. Kandinsky.

When we look at the picture of I. Ivazovsky “Ninth wave”, we can “hear” “the breath of the sea”; feel the cold wind and the horror of the last moments of life before the shipwreck. To understand the role of synesthesia in art is to unravel the code of the unconscious.

Reflecting and expressing the world, art struggles with chaos in the human psyche. Moreover, art is able to cure!

The first scientific experience of the use of artistic creativity in treatment was described by the doctor A. Hill in the book “Fine art against disease” (1945). He introduced the term “art therapy”.

The object of art-therapy is human mind, that is, the emotional world of a human being, a human soul. Here one can clearly see the sensual and image-bearing nature of art. Art can purify the sensual world (catharsis), and correct its orientation. Through art-therapy, psychical and psychological disorders can be diagnosed and cured [1] Types of art therapy: music therapy, chromo therapy, dance therapy, Libro-psychotherapy, theater therapy, fairytale therapy.

Art in psychotherapy (art-therapy) a means of therapeutic effect on the person, it is a way of expressing (“withdrawing”) mental and psychological disorders, experiences. A special place in art-therapy is given to music. It is common-place that music appeals to the human feelings directly.

A music appeals directly to human feelings.The influence of music on human consciousness is well taught. Homer in “Odyssey” tells about the healing of the wounds of a warrior with the sounds of music and singing. Bible says that David, playing on the harp, cured King Saul of depression [13]. It is known that in the sanctuary of Asclepius in Epidaurus, where Hippocrates was treating people, there was a music hall and a theater. Paracelsus introduced into the medical practice the method of “vibration”, treatment of music.

At the initiative of V.M. Bekhterev in Russia in 1913, a committee for the study of musical-therapeutic effects was founded. In this committee, the great physicians and physiologists of Russia worked S.S. Korsakov, V.M. Bekhterev, I.M. Dogel, I.M. Sechenov, I.R. Tarkhanov, G.P. Shipulin. They revealed the positive influence of music on various systems of the human body: cardiovascular, motor, respiratory, central nervous system.

Thus, art in art-therapy reforms psychic disorders of a person, without disturbing the individuality “I” and still allowing indeed facilitating a means of forming a perfect personality. While influencing emotions, art, having a perceptible and image-bearing character, activates the thoughtful feeling, and enriches the emotional world of a person as well as their mind. Art does not solely have a therapeutic impact upon a human being it makes them humane and puts the chaos of their feelings into a system, where they become reasonable emotions.

Art is able to purify (catharsis) the sensible world, to correct its direction, and, in the final analysis, to humanize the Person.