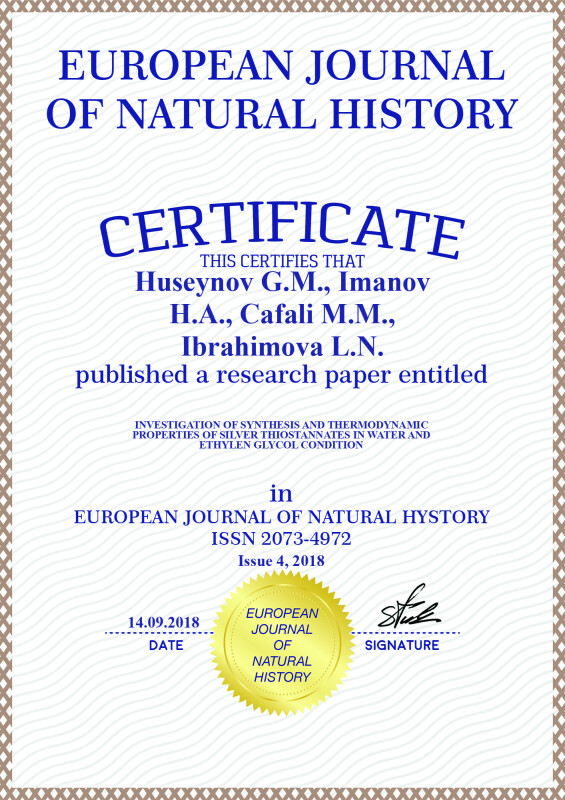 Article in PDF
2520 KB
Obtaining condition of silver thiostannates were investigated in water and ethylene glycol conditions based on AgNO3 and SnS2 compounds by the differential-thermal (DTA), X-ray, scanned electron microscopy (SEM) analysis methods. It has been established that, nano and micro-sized Ag2SnS3, Ag2Sn2S5, Ag4SnS4, Ag8SnS6 and Ag4Sn3S8 compounds are obtaining when the thermally processing mixture within the mole ratios of AgNO3/SnS2 = 4:3; 4:5; 2:1; 8:3 and 1:1 at a temperature of (pH = 6?8) 353-453 K within 48 hours in the water and ethylen glycol conditions. The values of the integral thermodynamic functions of the corresponding compounds of electrical motion force were determined and the standard atomization thermodynamic functions were calculated based on these values. The thermodynamic parameters of the decomposition reactions of Ag2Sn2S5, Ag4SnS4 and Ag4Sn3S8 compounds that were melting incongruently in the temperatures at 955 K, 1043 K and 1147 K were calculated and the equilibrium constants of the corresponding reactions were determined according to the Gibbs free energy value.
silver thiostannate
water
ethylene glycol
temperature
electrical motion force
thermodynamic function
micro photo
equilibrium constant
yield

In recent times, interest has increased about the acquisition of these compounds in the nanoparticles or micro-particles forms. In contrast to monocrystals, better properties are observed in nanoparticles and micro-particles. In this regard, the acquisition of nano and micro particles in the aqueous and organic solvent conditions of Ag2SnS3, Ag2Sn2S5, Ag4SnS4, Ag8SnS6 v? Ag4Sn3S8 containing compounds is one of the actual issues [12-20].

There is a few information about the acquiring of silver thiostannates in nanoparticles in aqueous and organic solvent conditions. In this regard, one of the most topical issues is the study of the condition of these compounds as nanoparticles in various organic matter (ethylene glycol, dimethylformamide and ethylenediamine) conditions.

Experimental part and discussion of the results

AgNO3/SnS2 = 4:3; 4:5; 2:1; 8:3 and 1:1 mixed in mol ratio and the solvent was added according to the stoichiometric structure of Ag2SnS3, Ag2Sn2S5, Ag4SnS4, Ag8SnS6 v? Ag4Sn3S8 compounds. The conditions for the reaction have been investigated in aqueous and ethylene glycol environments. The synthesis condition was researched within the range of 353-453 K temperature. Very small amounts of components were used сonsidering the formation of nanoparticles and the presence of tin(IV)sulfide adhesion properties. The required amount of components was mixed and 20 ml of solvent (aqueous and ethylene glycol) was added, three samples were prepared from each compound. The samples were completely mixed then placed in a microwave oven and heated at a temperature of 353-423 K for 48 hours. The precipitated sediments were filtered, initially washing with 0,1 M CH3COOH solution then washed with ethyl alcohol after all dried in vacuum at 353 K.

According to the X-ray results, it was found that the crystallization rate was 57-72 % of compounds obtained in aqueous and ethyleneglycol conditions. The Ag2SnS3 compound obtained at 453 K is crystallized in the orthorombic syngony: S.g.:

An endothermic effect observed at 935 K temperature in the DTA curve of the Ag2SnS3 compound, which corresponds to its melting temperature. The compounds Ag2Sn2S5, Ag4SnS4 and Ag4Sn3S8 are respectively incongruent melting at 955 K, 1043 K and 1137 K. It has been determined that these compounds are disintegrate by the following reactions:

Micromorphology of the samples was studied by HITACHI TM3000 microscope. The analysis of the microscopic images on the bottom of the glass revealed that compounds obtained in aqueous and ethylene glycol conditions are nanoparticles. The particle size is 60-120 nm in the thin layer of the Ag2SnS3 compound in the aqueous condition, but in the ethylene glycol condition is 40-100 nm (fig. 2). The particles of the Ag4SnS4 compound in the aqueous condition are 190-230 nm, and the particles obtained in the ethylene glycol condition are 80-140 nm. The particles are zigzagically structured and interconnected (fig. 2). It can be said that the composition of the phase is identical because it does not have a different structure.

Large aggregates are observed in SEM images of Ag4Sn3S8 compound. These aggregates size are larger in ethylenglycol (fig. 2). Aggregates are consist of high adhesive particles with a structure size of 98-137 nm. The formation of aggregates in this combination can be explained to the large amount of tin in compound. As can be seen in the SEM images, no other phase particles in the obtained compound structure of water and ethylene glycol conditions are observed. This also confirms the X-ray results of the Ag4Sn3S8 compound. An elemental analysis (Launch Trion XL dilution refrigerator – OXFORD device) of sediment content was made to specify the stoichiometric structure of Ag2SnS3, Ag2Sn2S5, Ag4SnS4, Ag8SnS6 and Ag4Sn3S8 compounds. According to the results, the mass and atomic proportions of silver, tin and sulphur contained in the compounds were determined (table 1).

According to the results of the table, it has been determined that the stoichiometric structure of the sediments corresponds to Ag2SnS3, Ag2Sn2S5, Ag4SnS4, Ag8SnS6 and Ag4Sn3S8 compounds. It has been revealed that the composition of sulphur in the simple formulas of compounds is slightly out of (0,07-0,09 at. %) stoichiometry. It can be explained by the fact that, when adding the thioacetamide solution to the initial mixture, some free sulfur is separated because of the condition is acid (pH = 2-2,5). This also shows itself in the composition of synthesized compounds.

type consentration element has been constructed to make EMF measurements. The results of [1-4, 21-24] studies have been used to prepare the concentration element. EMF measurements were made with a V7-34A brand digital voltmeter and compensation method at a temperature range of 300-430 K. Measurements were accomplished both at the heat and cooling time. At this time, the difference in the measurement results was less than 0.5 mV. EMF-T dependency charts have been established based on the EMF values. Thermodynamic parameters were calculated based on EMF-T dependency. For this purpose, the linear equation was used which is the used in scientific literature [1-3]:

Here, the number n – the number of pairs of E and T values; respectively SE v? Sb – dispersion of separated EMF measurements and b coefficients,

– average temperature, K; t – the student criterion. The corresponding linear equations have been obtained by the smallest squares method through a special computer program (POWDER-2). The silver parsial thermodynamic functions of Ag2SnS3, Ag2Sn2S5, Ag4SnS4, Ag8SnS6 and Ag4Sn3S8 compounds were calculated based on the following expressions using the linear equations.

The reason for the relatively high rate of error in the prices of integrated integrated temodynamic functions is that Gibbs free energy by EMF is calculated directly and the enthalpy and entropy is calculated from the angular coefficient of temperature dependence of EMF.

Standard atomization thermodynamic functions of corresponding compounds were calculated based on the prices of integral thermodynamic functions of Ag2SnS3, Ag2Sn2S5, Ag4SnS4, Ag8SnS6 and Ag4Sn3S8 compounds. According to Hess’s law, the atomic energy of any complex matter is equal to the subtraction of the formation enthalpy of that compound with the total atomization energies of the appropriate simple substances (Ag, Sn, S) [3]:

Results of the elements analysis of compounds

It is known that when the temperature rises, the value of free energy greatly varies unlike from the enthalpy and entropy. Therefore, equilibrium constants of reactions occurring at melting temperatures were calculated using the following equation [20]:

The results obtained are given in the table below (table 4).

Ag2SnS3, Ag2Sn2S5, Ag4SnS4, Ag8SnS6 and Ag4Sn3S8 compounds were obtained by hydrothermal method and their individuality was confirmed by X-ray, DTA methods in the aqueous and ethylene glycol condition. The micromorphology of the obtained compounds was studied and it was determined that the compounds at 453 K temperature were formed from nanoparticles. The boundaries of obtain of the compounds were determined in hydrothermal conditions. According to EMF measurements, the prices of integral thermodynamic functions of compounds are determined, and the values of the standard atomic thermodynamic functions of compounds based on these values are calculated. The equilibrium constants of the decomposition reactions occurring at melting temperatures of the incongruent melting Ag2Sn2S5, Ag4SnS4 and Ag4Sn3S8 compounds have been determined using Gibbs’s free energy value.