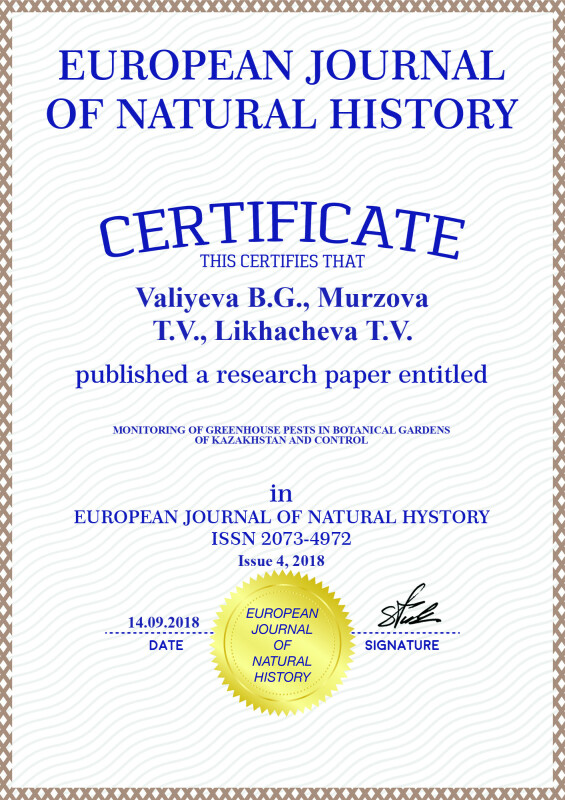 MONITORING OF GREENHOUSE PESTS IN BOTANICAL GARDENS OF KAZAKHSTAN AND CONTROL

Concentration in a greenhouse on a limited area of large species diversity and a high number of plants creates certain prerequisites for emerging and spreading of various diseases and the propagation of harmful and dangerous pests [1]. The greenhouse complex of the Institute of Botany and Phytointroduction was established in 1969 and is introduced to be the only place in the Republic where a collection of unique tropical and subtropical plants is represented. The collection area consists of 940 sq.m. The Main Botanical Garden (Moscow), the Botanical Institute of Moscow V.L. Komarova (St. Petersburg), botanical institutions of the Caucasus and Crimea rendered an enormous contribution in the enrichment of the greenhouse collection [2]. For many years the department has been working to enrich the collection material with new species including forms of interest in botanical and decorative terms [5, 6]. For this purpose, on the subject-matter exchange, the Botanical Garden annually issues seeds from domestic and foreign botanical gardens. According to individual literary data [8], the most common dangerous species are known on the plants of the greenhouse in Moscow. In Lithuania, 30 species of coccid pests of decorative plants have been registered [11]. The first publications on pests and diseases of greenhouse plants in Main Botanical Garden (Almaty) have been known since 1970. According to greenhouse coccids, there is some information in the published article of 1978 [3]. The results of long period researches (1970-1984) were published in the reference book [4]. During this period, the most common species were established causing great damage to decorative introduced plants in all botanical gardens of Kazakhstan including greenhouse plants. On the greenhouse plants, such pests as Tetranychus urticae, Trialeurodes vaporariorum, Coccus hesperidum, and Pseudococcus maritimus were found. Despite the small number of pest species, they are reported to be harmful species causing huge damage to plenty of plant types in the greenhouse. However, after the publication of the “Reference book” more than 30 years have passed. In this connection, it is time to carry out a complete inventory of the closed ground plants, analyze the pest species composition, the severity of the damage, the composition of the feeding plants that are prone to damage, assess the plant species resistance to pests, and apply protective control measures to reduce their severity and extension.

The aim of the work was to identify the species composition of pests of tropical and subtropical greenhouse of the Main Botanical Garden (MBG) (Almaty city) and the Zhezkazgan Botanical Garden (ZBG) (Zhezkazgan city). Stationary observations were conducted in the MBG, as well as planned visits to the ZBG according to a pre-compiled schedule. To diagnose and determine the severity of the most dangerous pests, insect pests were collected, as well as herbarium materials, and the greenhouse plants damaged by them were noted. Determinants and monographic works were used to determine and refine the types of dangerous insect pests [8, 11]. Determination and refinement of plants are conducted according to generally accepted sources [7, 10]. Approved recommendations on plant protection have been used for the implementation of protective measures against pests [9]. When planning treatments against pests, the accounting for the severity threshold is found to be the main indicator. For comparative entomological assessment all the plants, depending on the extent of damage will be divided into 4 groups:

1) no damaged by the pests;

2) development of the damaged no more than 25 % (the degree of damage is very weak);

3) development of the damaged within 26-50 % (the degree of damage is average affected);

In the greenhouse approximately 450 species and forms of tropical and subtropical plants of the world have been growing. During the survey, pests, which annually cause damage in plants, have been identified. In the greenhouse and warm-houses, development of coccid occurs annually. When examining closed ground plants, 13 species of especially dangerous pests of plants were identified (the names are given in alphabetic order):

5. Diaspis bromeliae Kern. The pest was first recorded at Cussonia spicata in 2010. The pest damages leaves, stems and internodes. Nearby plants were also damaged by the pest Abutilon hybridum (Malvaceae), Agave americana L., Agave sisalana Perrine. (Agavaceae), Cereus monstrosus (DC.), Citrus reticulate Blanco var. unchii (Rutaceae). The damage was counted to be 2 points. Mechanical cleaning of plants, washing with a solution of soap, as well as additional treatment with pesticide led to the partial or complete disappearance of this pest. Currently it is marked on the Abutilon hybridum (Malvaceae).

12. Trialeurodes vaporariorum Westw. It harms in the closed and opens (summer) ground, causing discoloration of the leaves and covers them with a sugary coating. The adult insect is 1.3-1.5 mm long, yellowish, with two pairs of wings pollinated by a waxy coating. The larvae are flat, oval, with spinules. Its eggs are greenish-yellow, deposited on the underside of the leaves. One generation is 30-40 days. Polyphage. Everywhere locally. The pest is marked on 7 families. Species that are severely damaged are: Begonia rex Putzeys (Begoniaceae), Beloperone guttata Brandebgee (Acanthaceae), Bignonia ungiuscati (L.) (Bignoniaceae), Coleus blumei Benth hybridus (Labiatae), Fuchsia hybrida (Onagracae), Gloxinia hybrida (Gesneriaceae), Lantana camara L. (Verbenaceae). The occupancy of the T. vaporariorum was 3-4 points. Pests of tropical and subtropical plants in greenhouse

As a result of the last year research (2010-2017), resistant plant species that were not damaged by the aforementioned pests were identified. These include the following plants from the family: Acorus gramineus’Variegtus, Alocasia odora C., Anthurium andreanum Lind. (Araceae). Thus, the results of multi-year (2010-2017) surveys of tropical and subtropical plants, a quantitative analysis of pests found on closed ground plants are shown in Figure.

According to the quantitative ratio Pseudococcus longispinus and Pseudococcus maritimus are the most abundant species in a closed ground. The range of damaged plants is extensive and they were identified respectively on 44 and 27 types of feeding plants. Coccus hesperidum is a polyphage and has been identified in 20 families and 24 plant species. Tetranychus urticae is identified in 21 families and 22 plant species. Trialeurodes vaporariorum is also one of the harmful pests of the enclosed ground. It damages many types of potted plants that grow in a closed ground. It should also be noted that the small number of pests and plant species, which were damaged by them,is not the criterion of their low degree harmfulness. All identified pests are classified as harmful and dangerous plant species of enclosed soil. Control measures include the following activities: Agrotechnical measures that ensure the normal development of plants, in autumn the removal and burning of affected leaves and shoots, on which the pest is overwintered; consumption of chemical control tools to reduce their numbers, severity and spread to other nearby plants. All of the drugs listed below are permitted for usage against plant pests.

2. A necessary condition for effective action of drugs is their alternation and their usage in combination with other drugs. Such mixtures reduce the number of treatments, and the effectiveness of the drugs increases. Particular attention should be paid to combating sucking pests (aphids and spider mites), which sucking out the juices, greatly weaken the plants.

3. Almost all chemical means of controlling pests and plant diseases are poisonous to humans and warm-blooded animals. Work related to the chemical consumption should be carried out under the direct supervision of agronomists and other professionals who are well versed in the pesticide handling and who are responsible for the implementation of necessary measures to prevent accidents.

In the greenhouse the development of pests is observed annually. During the survey, 13 pest species were found out and identified, damaging 51 genes from 43 families consisting of tropical, subtropical and potted plants. Relatively stable (18 species) and highly damaged plant species (20 species) are defined. Control measures are reduced in the timely usage of chemical agents (systemic or contact action), as well as improving the agrotechnical conditions of cultivation. During this period, plant pests such as bromeliad shield, citrus wax shield, black convex scutellum were brought. Identification of these pests has made it possible to reduce their numbers, spread to other plants and practically destroy some species (black convex scutellum). It should be noted that the same plant species of the same family can be damaged by several pest types.