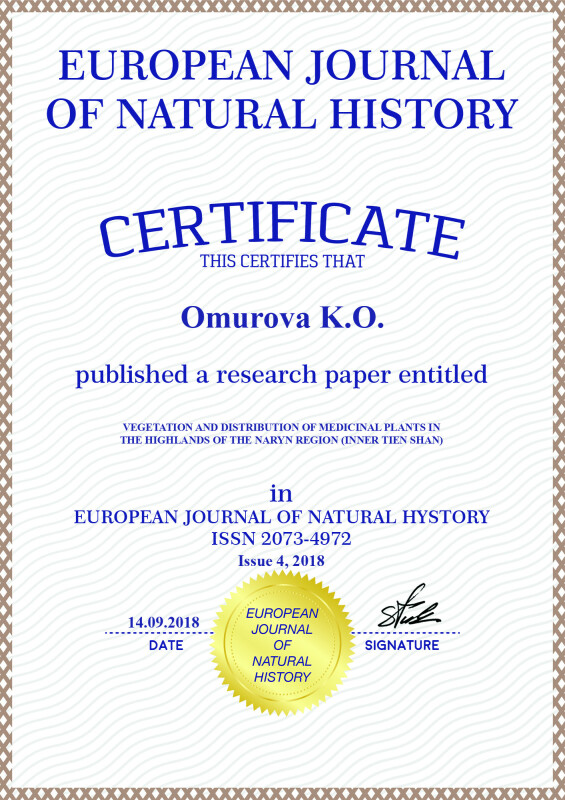 Article in PDF
1954 KB
In this work the general vegetation of the Inner Tien Shan is considered. The Tien Shan is a large system of mountain ranges stretching for 2450 km east-north-easterly direction. 198.5 thousand km2 of the Tien Shan territory is located in Kyrgyzstan occupying the Central and Inner Tien Shan, partially-Western and Northern. In the highlands of the Tien Shan, due to special physical and geographical conditions, a complex history of origin and development, a peculiar, distinctive flora and vegetation was formed. Therefore, almost 95?% of the territory of Kyrgyzstan is covered by mountains covered with natural vegetation, which is suitable for the use of medicinal plants of pasture and haymaking use. This favors the agricultural production of the republic. The area of ??the Inner Tien Shan is 80 thousand km2. Of these, more than half are raised over 3000 m. urn.m. With the purpose of preserving unique natural complexes, protection of rare and endangered species of animals and plants of the Inner Tien Shan, by the Resolution of the Kyrgyz Republic Government dated 1 March 1994, the Karatal-Japyryk State Reserve was organized on the territory of the reserve about 400 plant species were noted, 50 species of medicinal plants.
mountain structure
grass-motley
kobresia
accumulation
1. 20th anniversary of The Karatal-Japyryk State Nature Reserve Bishkek: 2014. – 460 p.
2. Chupakhin V.M. Inner Tian Shan – Frunze: Kyrgyz Ministry of Agriculture USSR. – 1979. 128 p.
3. Golovkova A.G. Vegetation of Kyrgyzstan – Frunze: Ilim, 1990. – 452 p.
4. Tsekanov A.S., Sodombekov I.S. Use and protection optimization of Song Kol basin vegetation (Recommendations). – Frunze, 1988. – 115p.
5. Alimbaeva P.K., Goncharova A.V. Wild herbs of Kyrgyzstan. Frunze, 1981. – 270 p.
6. Russian-Kyrgyz Dictionary of Plant Names and Botanical Terms Bishkek: Turar, 2013. – 338 p.

In the Central-Eastern part of Inner Tien Shan there is Karatal-Japyryk State Nature Reserve situated. It was established by resolution of the Kyrgyz Republic Government on the 1st of March 1994 with purpose of conservation of unique nature complexes, protection of rare and threatened species of flora and fauna of Central Tien-Shan, and maintaining regional environmental balance. The reserve currently occupies 21,264 hectares at an altitude of 2150-3980 m. above sea level being set with Son-Kul-Too and Acha-Tash ranges in the north and the range of Boor-Albas in the south. In general, the territory is a powerful mountain structure, considerably elevated (at least 2500 m, max – 4000 m above sea level) with a complex combination of ridges that occupy most of the reserve territory [1].

– scheduling of climatic conditions on the reserve’s territory;

– tabling of medicinal plants’ growing on the territory of the reserve expansion;

– studying the degree of distribution of medicinal plants in various high-landscape belts of the reserve.

The climate of the reserve is severe, harsh continental, with great fluctuations, both in seasons and during the day. Highland belt is cool in summer and cold (in places) and snowy in winter. July temperature here is +11, +16 °С. Winter is long (November-March) with January average temperatures –17, –20 °С. Nival belt (from 3500 m and above) is characterized by a harsh climate. This is the belt of snowfields, rocks, glaciers, moisture accumulation. Even in the lower part of this belt the average July temperatures do not exceed –4, –7 °С, average January ones fall to –22 °С. The average amount of precipitation is from 400 to 500 mm per year.

The relatively high air temperature in the summer period, followed by increased insolation, and constantly blowing winds contribute to the rapid evaporation of water from the soil and its desiccation. That’s why the development of plants in the highlands is strongly influenced by climatic factors, especially atmospheric precipitation [2].

The study of wild medicinal plants in various phytocenoses of high-mountainous areas has great theoretical and practical significance.

The main wild-growing species are valuable medicinal plants of the steppes, meadow-steppes, subalpine meadows of the Tien Shan. Therefore, the proper planning of further research works will yield good results in the study of plants and plant communities, the sustainable use and conservation of vegetation in the Inner Tien Shan.