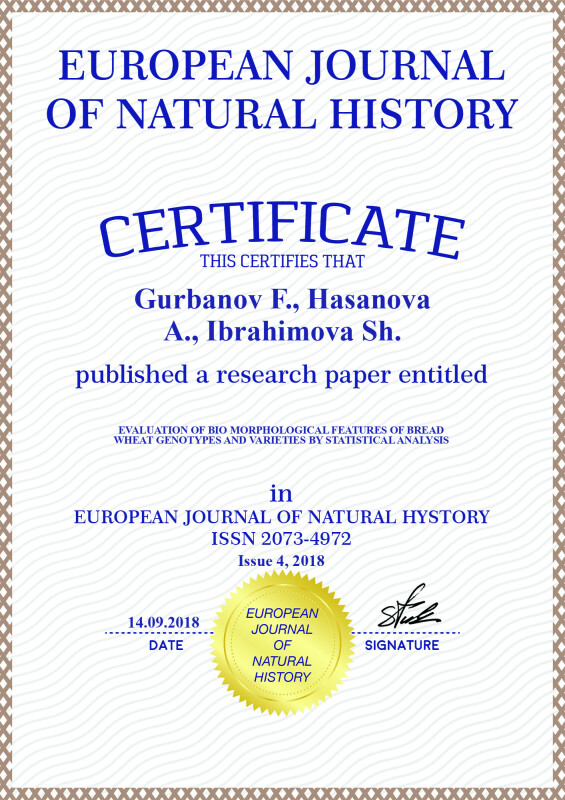 Article in PDF
2384 KB
The research was conducted on 49 bread wheat samples. Fifteen morphological features were studied and statistical analysis (Cluster, Correlation) have been carried out. According to the results, in order to carry out of incoming genetic analyses the first breeding material and samples have been selected. Acquisition of structural elements of the plant was carried out based on appropriate methods. Statistical analyzes were calculated by means of the SPSS computer program, and the cluster, corona and similarity diagram were given. Based on the results, samples were selected for the initial selection material and future genetic analyzes. It is known that there are complicated dependencies among the signs of productivity, but also there are a multitude of factors affecting these addictions. In the selection process, each of these conditions requires a thorough study, as it is of particular importance. Correlation relationships amongst many important signs in the study have been determined statistically accurate. The main purpose of the research is to compare the varieties of bread wheat kept in the National Gene Bank and to increase the yield of these sustainable varieties.
triticum aestivum l.
genoytpe
cluster
correlation
variety
1. Ahmadov M.G., Hasanova G.M., Rustamov Kh.N., ?badov V.F., Ibrahimov E.R., Musayеv A.J. Productivity and quality indicators of wheat learned in the competitive variety testing, proceedings of. XXIV (2013) v, Baku: Muallim, 2013.
2. Aliyev J.A., Talai J.M., Musayev A.J., Ahmadov M.G. The contribution of the Agricultural Institute to the country food security // Scientific proceedings of SRI of Crop Husbandry. Bak?: Muallim, 2012; 6-12.
3. Khan A.J., Azam F., Ali A. Relationship of morphological traits and grain yield in recombinant inbred wheat lines grown under drought conditions // Pak. J., Bat.., 2010, V. 42(1), P. 259-267.
4. Kovtun V.I., Kovtun L.N. Earing, kernel grain mass and 1000 seeds mass in increasing of productivity of winter bread wheat // Proceedings of the Orenburg State Agrarian University. Agriculture and forestry 2015. p. 27-29.
5. Belan I.A. Rosseeva LP, Lozhnikova LF, Blokhina NP, Valueva LG Breeding value of samples of the wheat of the VNIIR collection in the conditions of the southern forest-steppe of Western Siberia // Vestnik of the Altai State Agrarian University, №10 (72), 2010, p. 8-12.
6. Kochetov V.K.Sort of winter wheat, the main factor of increasing productivity and obtaining flour of specified quality. // Scientific journal. CubGAU, No. 75 (01), 2012.
7. Aliev R.T., Haj?yeva S.?., Javadova L.I., Mikailova R.T. sustainability of bread wheat varieties (T.aestivum L.) to abiotic stress factors. Proceedings of Botanical Istitute of ANAS, 2010 XXXI volume. p. 397-402.
8. Zhuchenko A.A. Adaptive farming. / Fundamentals of agricultural systems in Stavropol. Under the general editorship of VM. Penchukova and G.R. Drozhko. Stavropol, 2005, p. 73-113.

The growing population of the world and suffering from food lack are among the main problems of today. In the world market, the price of a seed is directly proportional to the amount of protein. Due to this demand, agricultural workers, including agrarian and scientific scientists, and professionals are responsible for increasing the productivity of grain crops, increasing their stress resistance and creating more quality varieties. This is due to select the more productive and stress-resistant bread wheat varieties is the main task of the breeders.

In order to meet the growing demand of the people for bakery and bakery products, development of agriculture is one of the most important issues. Wheat is the main human food crop and is rich in nutrients.

In order to detect the existing genetic diversity of the wheat plant over the centuries and to ensure its efficient use in the future, wheat collections should be studied from a variety of aspects, including the quality of samples [5].

As in many countries, in our republic bread is the main source of food for the population and plays a key role of the people’s demand for herbal protein. it is considered that wheat consists of 35 % of the main food source of people and provides almost 20 % of the world’s nutritional demand. In our republic, cereals are grown in all regions – irrigated, arid, at the foot of the mountain and mountainous zones. From this point of view, one of the main tasks of the breeders is to create appropriate varieties for each soil-climate condition. As the quality of soft wheat is determined by genotype, so technology of sowing depends on in climatic conditions [6].

In order to search for valuable sources for selection, it is essential to conduct a theoretical research. In this regard, laboratory methods allow the evaluation of the raw material in the application of breeding processes and evaluation of the best material at all stages of the breeding [7].

Continuously obtaining high yield varieties from cultivated crops is one of the key factors [2]. According to A. Juchenkova (2005), variety plays the key role in 22 % of the various agro-technical measures, used to raise productivity.[3] In recent years, in order to strengthen the food supply and livestock fodder supplies, in our country have been adopted a number of state programs, laws and decisions. Therefore, in our modern times, which are characterized by acute and anomalous climatic variability, the creation and application of cereals varieties with stable yield and grain quality is urgent and important [2, 1]. In order to achieve the goal, in the first year of the research, in order to determine the biological, morphological features, systematic and economic signs of bread wheat varieties, to determine the ecological and agrotechnical conditions needed to obtain high yield grains, phenological observations, plant and spike analysis were carried out. Since ancient times the genetic diversity of the signs has been studied by investigating the morphological features of the plants in the field conditions. It should be noted that the selection of better genotypes can be achieved by using genetic diversity [3].

In accordance with the theme, held in the Scientific Research Institute of CropHusbandry of the Republic of Azerbaijan it was conducted one of the major researches “On creation, introduction and distribution of new, quality and ecologically adaptable varieties of wheat by enriching and hybridization of germplasm of wheat on the basis of local and introduced samples”, also in Ganja, it has been conducted the researches on selection of bread wheat under irrigation conditions. Despite the high productivity of some introduced varieties, the reasons for late adaptation of these genotypes to local conditions are different (lack of soil moisture during vegetation, hot, dry summer, mineral elements and humus-free, saline soils, etc.).

The sharp change of climate indicators than the average perennial norm – excessively soft winter, intense rainfall and low temperatures during the summer and early summer, high temperature during ripening period, the shortening of waxing ripening period in the wheat during the ripening season affect the quantity and quality of the yield. As a result of cooperation with international organizations, most samples with high productivity are selected and introduced from obtained breeding materials of ICARDA, CIMMIT, and etc.

In order to increase productivity and quality it is important to apply new innovative technologies, mineral and organic fertilizers, agrotechnical methods against pests and diseases etc. Establishing high genetic potential, biotic and abiotic stress factors resistant, favorable to the conditions varieties, under the circumstances we mentioned, is one of the major challenges of the breeders [5].

According to the conditions of each region, our country has different zones for its natural climatic conditions. To ensure high yields in those regions it is advisable to cultivate varieties favorable to each region climate.

According to A.A. Juchenkova (2005), in various agro-technical measures used to increase productivity variety has the role of range from 20 to 22 %. The variety plays the main role in extreme conditions (drought, frostbite, epiphytosis of diseases, etc.) [8].

The main purpose of the research is to comparatively evaluation of 49 varieties of bread wheat varieties available in the National Gene Bank and increase the planting of these productive and resistant varieties.

The study was conducted on 49 bread wheat varieties planted at the scientific research base of the Genetic Resources Institute of ANAS. Gene bank samples were collected from different regions of Azerbaijan. The examples used in the experiment were sown in two repeats in each sample with the “Randomization” design. The intergrain distance was 4 cm and the distance between the two rows were 20 cm. 15 morphological parameters (height of plant, number of all stems, and number of productive stems ...) were recorded.

obtaining of structural elements of the plant was carried out on the basis of appropriate methods. Statistical analyzes were calculated by the SPSS computer program, and the cluster, correlation and similarity diagram were given.

In the research, structural elements of productivity of 46 bread wheat genotypes, taken from the gene bank of Genetic Resources Institute of ANAS and planted in the Scientific Research Base have been studied and correlation analyzes on 15 features have been performed.

It should be noted that the number of grains is of great importance for breeding [6]. In V. aestivum genotypes number 37 and 39 varieties and V. durum genotype number 38, one of the structure elements of productivity, 1000 seeds weight the number of kernels in the main spike have been of interest. Thus, in the genotypes 37, 39, the 1000 seeds weight was 38.8 grams and 39.6 grams (correspondingly), the number of kernels in the main spike was 35.2 and 36.2 (respectively), this addiction was normally. However, there was a difference between these figures in genotype 39, so, 1,000 seeds weight was 51.2 grams and number of grains in main spike was 35.4. Based on annual indicators, research is still underway because it is hard to come to a complete conclusion.

In recent year’s research, the indicators on 49 samples, average values of this dependence were 39.7 and 39.4. In the varieties of V. erythrospermum and V. aestivum, the difference between these figures was found that the number of seeds were few, but 1000 seeds weight was more.

Mdk (52.4g) was determined as the most severe species of V. erythrospermum. In V. erythrospermum v? V. lutescens samples te-0,4, tu-0,8, sss-22, sds-4,4 were determined. Due to the above-mentioned symptoms, they differed from other varieties with high values. Therefore, these two species varieties were included in the neighboring (6.7.8) clusters. In some of the V. aestivum varieties, low values were observed. So, esk (1.8 g) and mdk (31.2 g) were deteemined respectively.

In cluster analysis the genotype No. 87 and No. 96 took place in near clusters, No. 96 genotype took its separate place in cluster 8. Genotype No. 79 took place near the two new variety located cluster, to the 4th cluster. When we focus on the location of the new varieties in the cluster analysis, we observe that they belong to different clusters.

Thus, due to several factors, the genotypes no. 95 and 94 were closer in clusters (4th). The indicators of these varieties on the structural elements of productivity was closer to one another, where the sharp difference was only given to the length of the awn. If we take into consideration that 1000 seeds weight is one of the main indicators of productivity, then the genotype 96 can be considered relatively more efficient than the other two varieties. The genotype number 96 is farther away from them, i.e in the 8th cluster.

Correlations between morphological parameters of seed Relations between morphological parameters of seed

It is known that there are complicated dependencies among the signs of productivity, but there are also many factors affecting to these sdependences. In the breeding process, each of these conditions requires a thorough study, as it is of particular importance. Amongst many important signs in the study, correlation relationships have been determined statistically accurate.