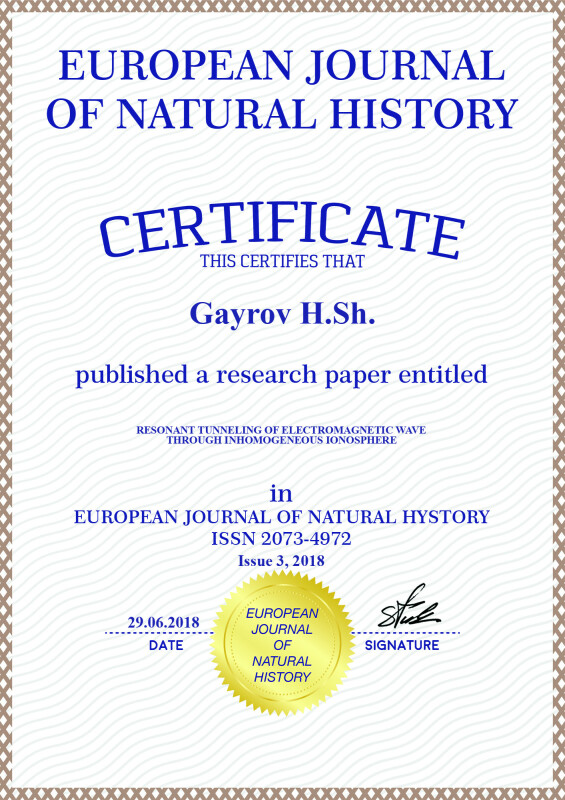 Lately there has been a high demand for researches of wave resonant tunneling through micro-scale inhomogeneities effectiveness. In particular for reflectionless waves (of different nature) passage through significantly thick layers of inhomogeneous environment [1-4].

There are plenty of approaches but the most constructive one is using exactly soluble models of inhomogeneous environment waves’ interactions. Using these models makes it possible to examine wave processes in cases when approximate methods are obsolete or useful, because of inhomogeneities of high amplitudes. For example, waves’ reflectionless tunneling through plasm is important for radiation yield from sources that are in dense plasma in astrophysics, it is also interesting for powerful electromagnetic radiation absorption effectiveness intensification, when plasma is heated to thermonuclear temperatures as the result of wave penetration to dense plasma, and also for gases [5].

In this work we examined accurate solutions for Helmholtz equation, that describes reflectionless tunneling of electromagnetic wave through a wide inhomogeneous gas layer of ionosphere with micro-scale structures of its high-density amplitude.

which is written by

is a vacuum wave number, εef(x) is effective dielectric permittivity of inhomogeneous environment.

, where N is a refraction index,

and εc are components of dielectric tensor at upper hybrid resonance frequencies.

Analogously to [2, 3] the accurate solution to equation (1) is defined with formula

In that case dielectric permittivity of gases is determined with formula

For the dimensionless wave amplitude we have formula

. In inhomogeneous layer 0 ≤ ξ ≤ b it follows that p2 > 0 is constraint. As the most simple analytical model, which at the borders of gas layer ξ = 0, ξ = 3b automatically provides conditions of reflectionless cross-linking of incident electromagnetic wave from vacuum (ξ < 0) and electromagnetic wave outgoing to the right from plasma layer (ξ > 3b), we use the following formula for dimensionless vector p(

it will allow to rewrite the equation more convenient and consider far more summands in it.

First of all, when m = 0.18 and computing results ef(x) an effective dielectrical plasma permittivity will be

As we see at the picture 1, wave vector profile includes opacity layers, where ε(ξ) < 0. It’s important that inhomogeneity could be represented as arbitrary number of different layers, with a number of independent parameters stratification.