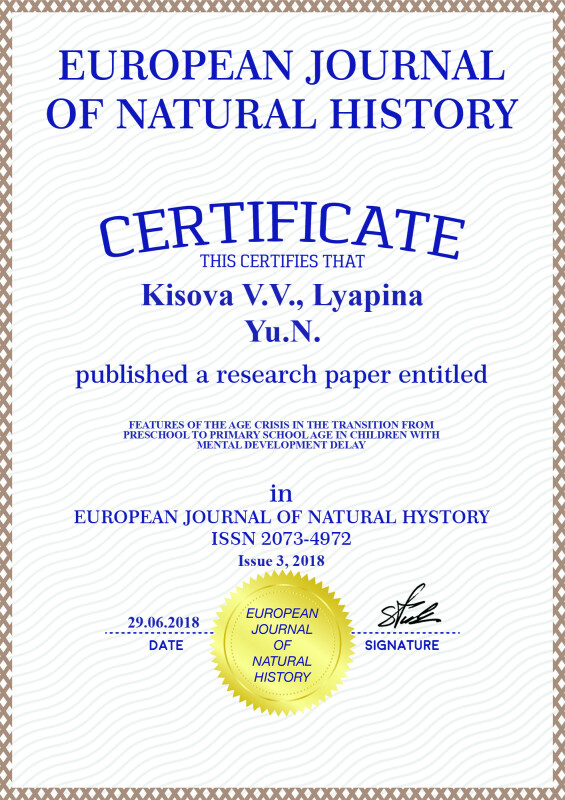 Basic researches on the problem of age crises in Russian psychology are scientific works of P.P. Blonsky, L.S. Vygotsky, K.N. Polivanova, D.B. Elkonin and other researchers. L.S. Vygotsky emphasized that crises are a prerequisite for normal, consistent development of the individual. His developmental periodization is based on the alternation of stable and critical ages. Thus, during stable periods, development occurs through microscopic changes in the child’s personality, which are subsequently reflected in a new age-related formation. On the other hand, during a relatively short critical period, child’s personality undergoes sharp, dramatic changes. L.S. Vygotsky associates this crisis with the change in current social situation of development and the emergence of a new one [12].

L.S. Vygotsky designates as the main features of critical periods the following:

- firstly, the absence of clear borders of the crisis, i.e. the difficulty to determine the exact moment of the beginning and end of the crisis;

- secondly, the difficulty of education, conflicts with others and internal conflicts, decrease of performance and learning difficulties;

D.B. Elkonin associates the crises with key activities. Transitions between the so-called age-related epochs are сonsidered as great crises, each epoch starts with the period of development of the need-motivational sphere. Transition between the periods within the same epoch is considered as a small crisis and is associated with the formation of intellectual and cognitive forces of children, their operational and technical capabilities [3]. At the present stage of development of psychological science crises are claimed to be normative, natural and necessary conditions of personal development. They are perceived as transitional phases that separate one stable period from the other.

According to K.N. Polivanova, crisis is not just a period of change in the social situation of development or key activities. Crisis is a very specific psychological space in which the act of development is committed. The psychological space of the crisis is the condition that is necessary for the transformation of a new formation into the ability of a child. Besides that, K.N. Polivanova points out that the destructive and constructive components of crises constitute a single whole, while the destructive component is a prerequisite for the transition. Attempts form the mechanism of the age crisis [9].

Thus, we see that, in the opinion of the above mentioned authors, every age crisis of childhood is a sign of the child’s psychological maturation, its transition to a higher, qualitatively new level of development.

We shall consider in more detail the symptoms of the crisis of seven years, which puts an end to the preschool period. In the periodization of D.B. Elkonin this crisis is regarded as a small one and is thought to separate two periods of the same epoch – preschool childhood and primary school age. L.S. Vygotsky discovered two main symptoms of this crisis: grimacing and putting on airs. In his opinion, the loss of childish naivety and spontaneity are especially characteristic of the children aged of seven.

K.N. Polivanova divides the symptoms of the crisis of seven years into three categories. Symptoms of the first category concern some established family relations and rules and manifest themselves in the direct violation of these regulations. K.N. Polivanova subsumes under this category dispute, disobedience, pauses, exactingness, stubbornness, cunning, whims and reaction to criticism. In the seventh year of life it becomes possible to distinguish the attitude to rules set by parents in holistic relations to a close adult. The child understands that rules are set not by himself, and the primary attitude towards the rules is negative, hence the appropriate response – violation of these rules. The child tries to oppose the position of his parents with his own position. Symptoms of the second category, which are neutral, comprise adult behavior and appearance. Thus, the child tries to assume the role of an adult, seeking to show his increased independence. The last category of symptoms of the crisis includes positive acquisitions of the child: independence, self-education, emergence of common issues and interest in school. The child tries to play the role of an adult [9]. Thus, all of the above listed categories of symptoms help the child on his way of growing up.

During the transition to school age the child changes dramatically, he is no longer a preschooler, but not a student yet. He moves to a new stage of development, which marks a new stage of socialization. The main factor in the successful adaptation of the child at school is his psychological readiness to learn.

School readiness is a multicomponent concept. Different authors distinguish the following components of this concept: personal, motivational, intellectual, emotional-volitional and communicative readiness. D.B. Elkonin, speaking about the problem of school readiness, puts an emphasis on the formation of prerequisites for learning activities. The most important prerequisites, in his opinion, are the ability to focus on the system of rules, the ability to listen to instructions and follow them, the ability to work in conformity with the model.

In the works of L.I. Bozhovich the main criterion of school readiness is the central new formation of the personality, called “internal position of the schoolchild”, which is closely connected with cognitive need and the need to communicate with adults at a new level. According to L.I. Bozhovich, the source of the crisis is the discrepancy of the new personal formation with the old system of relations inherent in preschool childhood [2]. It is worthwhile noting that the internal position of the schoolchild does not appear immediately and goes through several stages on the way of its formation. Thus, in the seventh year of life children have a positive attitude to school in the absence of orientation to the substantive points, and by the end of the eighth year the actual position of the schoolсhild, which combines social orientation and orientation to the educational components of school life, takes shape.

Other important age-related formations that have an impact on the learning success include the development of motivational sphere, namely the development of cognitive motivation associated with cognitive need; social motives based on the understanding of learning need; “positional” motive that characterizes the desire to take a new position in relation to others, etc.

Futhermore, at the turn of preschool and primary school age there is a change in the self-esteem of the child. D.B. Elkonin points out that while the child has an unconditional positive attitude towards himself / herself at the age of six, when the real state and the desired state are not differentiated, there is a division of I-real and I-ideal and more adequate self-assessment at the age of seven [4].

Creation of new formations is associated with the emergence of a number of dissections in the consciousness of the child. All these skills do not appear simultaneously and pass through several stages of formation. K.N. Polivanova introduces the concept of behavioural instability of children in a critical period, when in some situations the symptoms of crises manifest themselves, while in others they do not.

Speaking about the peculiarities of the age crisis development in the transition from preschool to primary school age in children with mental development delay, it should be noted that regrettably, there are no special studies on the issue.

We can point out that, by the end of the preschool period, children with mental development delay are not ready for school. They do not reach the optimal level of personal, social, motivational, intellectual, communicative, emotional and volitional readiness for learning. There is a lack of cognitive interest, self-regulation and control, critical attitude to the results of activities, emotional instability, predominance of playing interests, inadequate self-assessment in children with mental development delay.

As noted above, normally developing peers have the ability to regulate cognitive activity formed by the end of the preschool period. On the contrary, children with mental development delay are characterized by a lack of ability to subordinate their activities to a specific task and focus on a specific action, as well as by a lack of mental planning and self-control skills.

U.V. Ulyenkova in her studies identified the following peculiarities of self-regulation in children with mental development delay:

- performance of tasks in accordance with the instructions (rules) doesn’t arouse any interest or any positive attitude in children, they are ready to stop it at any time;

- -at the stage of orientation in the task, children verbalize only a common goal, the rules are not fully understood by them even in practice;

- during the execution of a task, children are better able to accept simple rules, establishing logical connections presents a real challenge for them;

- as a general rule, children are satisfied with their work even if they do not achieve the desired result, they do not try to correct mistakes or improve their work [10].

In like manner, various aspects of the features of formation of self-regulation in children with mental development delay were studied in the works of E.B. Aksenova [1], V.V. Kisova [5, 6, 11], T.N. Knyazeva [7], etc.

As already noted, children with mental development delay have unformed motivational sphere by the end of the preschool period. While their normally developing peers acquire the internal position of the schoolchild as a new formation connected with the emergence of cognitive motive, children with mental development delay retain the playing motive and it remains predominant till the end of the preschool period. Generally, children have no desire to go to school, their cognitive need is unformed. Negative experiences, difficulties in learning and establishing contacts with peers, lack of educational motivation – all this leads to school disadaptation and consolidation of this phenomenon even in the early stages of schooling.

A similar point of view can be found in I.V. Korotenko’s concept. She explains the overestimated self-esteem in children with mental development delay by less developed compensatory and psychosocial abilities as compared to normally developing peers. She notes that the feeling of underestimation, self-undervaluation in children with mental development delay is compensated by artificial re-evaluation of their personality, which is most likely not to be realized by the child [8].

Thus, we see that the main age-related new formations of children with mental development delay turn out to remain unformed by the end of the preschool period, namely, they have an unformed internal position of the schoolchild, an insufficient level of self-regulation and arbitrariness, inadequate self-assessment, predominance of the playing motive instead of the cognitive one. Timely performance of psychological and pedagogical correctional work is necessary for full-fledged crisis development and prevention of its negative consequences.