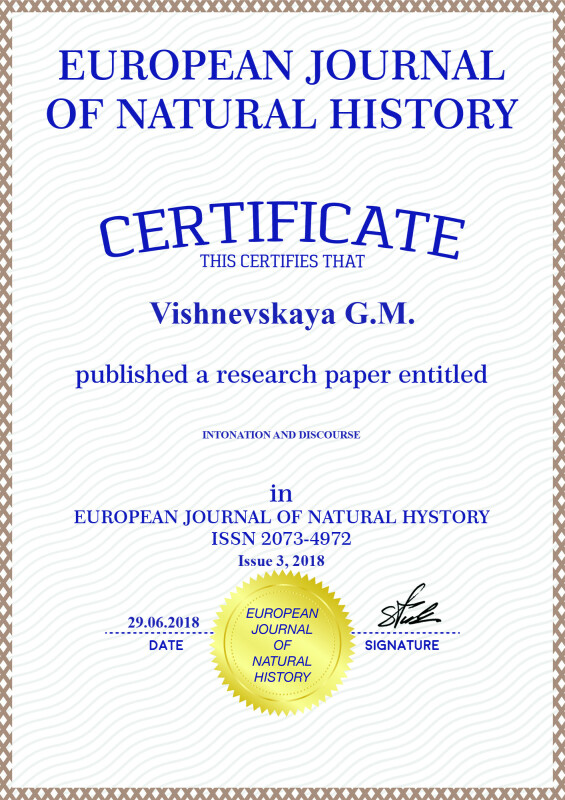 One can define a department of modern linguistic science concerned with the study of intonation as intonology (Antipova, 1979). Intonation (Lat. ‘intonare’ – ‘to pronounce’) is a complex of expressive phonetic qualities of speech. Intonation is very obviously suprasegmental, “…since an intonation pattern extends over a whole utterance or a sizable piece of utterance” (Trask, 2007, 283). Intonation is the ‘soul’ of a language (Kingdon, 1958). It is its ‘voice mimics’ (Bally, 1951). It is a complex phenomenon in both form and function. Intensive intonation studies began not so long ago – in the 1950s of the XXth century, due to overwhelming achievements in the field of linguistics and the accumulation of many experimental data deduced from the study of many world languages. The implementation of modern precise methods of phonetic analysis have brought about astounding results that made it possible to pronounce intonology an independent department of linguistics having its own object of research and its own methods of analysis. Intonation began to be explored from different angles: linguistic, paralinguistic, sociolinguistic, didactic, esthetic, etc. As a complex phenomenon of oral speech, it attracts much attention on the part of specialists from different spheres of knowledge: philologists, linguists, literary critics, art critics, theatrical experts, sociologists, psychologists, acoustic engineers, etc. The study of intonation is of prime importance for the practice of teaching and learning foreign languages. When one listens to the sound flow of speech in a foreign tongue it is firstly intonation that catches one’s ear. The concrete meaning of an utterance may not be quite clear but the overall prosodic pattern of speech can help the non-native speaker decode the general emotional state of the speaker and his attitude towards the partner in communication. It is common knowledge already that intonation is most difficult to master in the foreign language learning process. Wrong intonation does not only betray a speaker’s foreign origin and jar upon a native speaker’s ear – it can convey distorted meanings resulting in a serious misunderstanding in the process of communication. In this sense, as many phoneticians point out, intonation is much more important than accurately pronounced sounds of a foreign tongue: “English speakers are able to make a good deal of allowance for imperfect sound-making, but being for the most part aware of the far-reaching effect of intonation in their own language, they are much less able to make the same allowance for mistakenly used tunes” (O’Connor, Arnold, 1973, 2).

Intonation is capable of transmitting a whole range of language meanings. The remarkable role of intonation is manifested in the emotional and expressive power of utterances, intonation is the music of speech, its non-verbial means of communication. The individual intonation characteristics of speech are very much diversified. Does it mean that intonation is subjective and can’t be given any objective description? Certainly, not. People would stop understanding each other if they couldn’t decode what meanings and speakers’ attitudes stood behind the tonal inflections of speech (Zinder, 1979). There are definite intonation patterns of oral speech that are recognizable by all the speakers of a given language community. On the other hand, foreign speakers often misinterpret the intonational nuances of native speech being guided by their own native language intonation meanings. Such intonation mismatch causes communication hazards between native and non-native speakers of the concrete common language.

The purpose of this research is to examine the theory of discourse intonation and to discuss issues related to intonation pedagogy. The basic argument here will be in favor of teaching certain elements of discourse intonation after taking into account governing conditions such as learner needs, teaching programme aims, and the learning context. The issues of important and peripheral in intonation for non-native speakers interacting with each other in EFL situations are brought into focus. It should be noted that certain intonation parameters, such as distribution of sentence stress in oral discourse, nuclear sress prominence, rhythm and melody patterns, etc. may be marked by phonological errors in non-native speech, causing breakdowns in communication.

The beginning of the XXIst century is witnessing renewd interest in intonation research.The goal of intonology nowadays is to give a description of intonation as a linguistic category possessing its own phonetic features and functions, its universal and specific characteristics in oral speech. What is more, the studies of intonation nowadays are concentrated on various types of oral discourse. Discourse Intonation seems to be the most sensible approach to the teaching and analysis of everyday speech. Discourse Intonation (DI) theory was developed at The University of Birmingham (UK) in the late 1970s and early 1980s. The originator of this approach was David Brazil (1925-1995), working with Professors John Sinclair and Malcolm Coulthard (Brazil et al., 1980). It became influential in English Language Teaching (ELT) in the mid-1980s and 1990s, both for teacher training (language awareness) and classroom practice (pronunciation). This influence continues to grow, and DI is increasingly used in academic research (Hewings, 1990; Cauldwell, 2013).

Certain established practices in foreign language teaching, especially in the development of communicative skills that demand the production of language, assume that written and spoken discourse are identical in form, structure and use. Similarly, it follows that the acquisition of one leads to the acquisition of the other. However, these two versions of discourse are not identical and they diverge from that suggested by foreign language textbook authors with communicative aims in mind (Tocatlidou, 2016).

The recent discourse intonation research focuses on the stylistic peculiarities of oral discourse (Velikaya 2010; Freidina 2005 et al.). Intonation stylistics (Antipova, 1979) is concerned with a description of suprasegmentally different styles of speech (prose reading, stage speech, recitation, oratory style, conversational style, etc.). Text and discourse intonation research was initiated in Russia at the end of the XXth century (Doubovski, 1978). The term ‘discourse’ refers to the larger context of the whole conversational interaction between speakers. Intonational meaning cannot be separated from discoursal meaning. The discourse approach views the function of intonation as the speaker’s way of organizing and relating together meanings throughout the discourse. Intonation reveals the information structure of the discourse, the relationship between utterances. Descriptions of intonation differ in the way they account for its meaning. One description links intonation meaning to attitude, another looks at grammar, and a third to discourse. All the functions of intonation work together and help to express the rich character of oral speech discourse, the so called ‘speech in action’, or ‘streaming speech’ (Cauldwell, 2013).

Intonation is a linguistic universal: all languages appear to have it, though its form and function will inevitably differ from case to case (Kingdon, 1958; Crystal,1969; Bolinger ,1986; Cruttenden, 1997; Crystal, 1969; Fox, 1995). The attempt to determine the limits of such differences leads to a concern with the establishment of an intonational typology, and an attempt to identify possible parameters of typological differentiation, and of the criteria that are appropriate for identifying them. In intonation, there is still a lack of data about the permitted range of inter-language variation, and where descriptions of intonation of different languages are available it is difficult to relate them to one another because of the differing modes of description adopted. However, the description of intonation patterns of languages coming into contact in the speech of a bilingual is particularly imperative in view of the practical difficulties the learners of the target language inevitably face (Vishnevskaya, 2002). The low level of phonetic proficiency stems primarily from the learner’s failure to adequately perform intonation (in spoken communication) or interpret it (on the level of perception) in discourse. Intonation presents both phonetic and communication hazards to the learner of English and deserves particular attention from EFL pronunciation instructors, both practically and theoretically.

Of late, most theoreticians and teachers of English pronunciation are focused on oral discourse prosodic and intonation characteristics of different varieties of English in the era of language globalization with English as a lingua franca in cross-cultural communication. In extended speech utterances, they have to deal with a lot of intonation istakes (both in form and function) in English speech of classroom bilingual learners, betraying their foreign accent, mostly on the suprasegmental level. The social communicative effect of accented speech in oral discourse needs further research in view of the necessity of successful intercultural communication. The development of corpus-driven studies in linguistics over the past few decades resulted in thought-provoking research findings worthy of linguists working in the field of phonetic studies with a focus on prosody and intonation in oral discourse (Cheng, 2015; Kazakova, 2017).

Research in the teaching of English pronunciation as a second and foreign language (ESL/EFL) over the last decade or so has proved the significance of intonation features (i.e., melody, stress, rhythm, pausation, timbre) in the comprehension and production of the language (Bolinger, 1986; Fox, 1995, Cruttenden 1997, Atoye, 2005). However, the teaching of intonation remains to be less effective and more hazardous than the teaching of segmental phonetic characteristics of a non-native tongue (Vishnevskaya 2002; Cheng, 2015; Rannali, 2016). Besides, there is still no adequate and learnable description of English intonation for language learners coming from different language backgrounds. The discourse intonation approach gives real chances for language learners to improve their intonation skills in oral speech and avoid serious communication breakdown with native speakers.