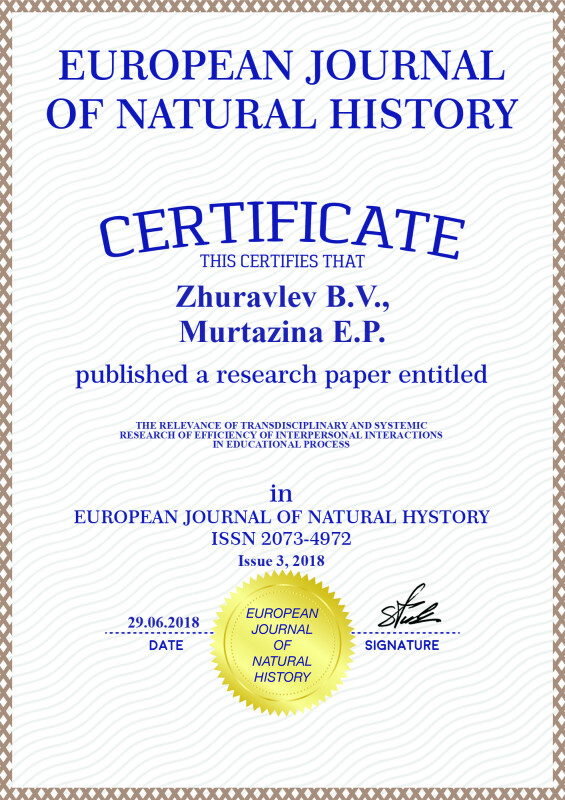 A large number of scientific research, publications and reviews are devoted to studies of educational processes in the school, including the higher school, and the identification of patterns and mechanisms of optimal interaction of subjects in the field of pedagogy. Most of these scientific works are based on psychological methods of research and are theoretical or applied nature. Most of the works in the field of pedagogy are based on the cognitive development theory of Piaget [18], in which he describes a series of stages: sensory-motor (birth to 2 years), preoperative (from 2 to 7 years), stage of concrete operations (7 to 11 years), stage of formal operations (it begins in adolescence and covers the entire human adulthood) in development of intellectual sphere of children, which includes changes that affect cognition and cognitive abilities of the child. According to Piaget, firstly cognitive development involves processes based on actions, and just then appears in the form of changes in thinking processes.

At the heart of many domestic and foreign works is the cultural-historical theory of L.S. Vygotsky [32], showed the role of cultural and social development and development of the human personality. Both the theory itself and its main provisions are analyzed depending on the object of attention of the authors. Vygotsky L.S. emphasized the social dimension of intelligence that is developed through joint activities and the creation of its products, such as culture, through cooperation, communication and learning, both in phylogenetic and ontogenetic sense. Vygotsky L.S. claimed and presented evidence that cognitive skills of a person are formed by their interaction with the other people in a culture with artifacts and symbols created by the human community. This theory finds followers among the leading foreign researchers, who criticize the development of the theory of intelligence, based only on the processes of social competition [15].

In foreign psychology the most widely used concepts such as: the law of development of higher psychological function, the zone of proximal development, often considered, compared together with the concept of scaffolding, the triangle of meditation, the idea of the importance and the role of adult and peer in a joint activity of the child. In the west, the cultural-historical theory of Vygotsky and Leontiev’s theory of activity connected, even in the title, in the cultural-historical activity theory (Cultural-Historical Activity Theory). Meditation triangle of Vygotsky and Leontiev’s ideas were recycled by Engestrem, and on that basis he developed a model for the structure of activity. This model is widely known abroad [30].

The greatest interest in Engestrem model is the effectiveness of its application to the analysis of joint activities in the group, the community, and between organizations. This model also allows to examine the systems of activities mainly on the macro-level of the staff and the community compared to micro-level of the individual, acting with the tools. The model allows to design, organize and conduct examination of activities. In practice, the formation of cultural-historical activity theory allows to organize work for young people with emotional and behavioral difficulties, joint activities of teachers in schools, create new cultural forms by human activity [7]; organize joint leisure-mediated activity of children – the author’s project “The Fifth Dimension” by M. Cole and his colleagues [12]. In this article the authors examine the application to the research of the problem of training and development approaches of Vygotsky and Leontiev, in which the basic unit of study of human thinking in the cultural-historical activity theory – a joint mediated activity.

Data from a study of the “Fifth Dimension”, specially organized activities for children after school to support cognitive and social development of children and adults are analyzed. Applied practically-oriented nature of the theoretical model should be noted. Representations of L.S. Vygotsky were developed in the domestic psychological school and pedagogy [33].

A large number of works are devoted to the subjectivity of small social groups, carrying out joint activities, their consistency and integrity, the presence of independent qualities in macro systems of this level: the group aims and motivation, norms and values, cohesion, compatibility and harmony, efficiency, orderliness and reliability groups, group installation, group self-esteem, and others. [5, 26, 33]. Also some authors in psychosocioethology draw attention to the conditions of life of the group subject and the dynamic features of group subjectivity, in particular the levels of development, actualization and self-determination.

Many questions remain regarding the selection processes of different tactics of social behavior of individual subjects depending on their source of individually-typological features, including cognitive ability, general and research activity, as well as the hierarchical status in the subpopulations.

A significant proportion of publications are devoted to the study of the features of work, play or sports joint activities. Among them, most of all works associated with the production joint activities and labor groups, especially with the brigade form of labor organization. Researchers also show interest in the joint activity of preschool children, co-curricular activities of students, teachers, and pupils. In the first case similar in content issues are considered, such as predictors of emergence of collective action and its subject children have got [29], the development of the gaming joint activities and relations of preschool children [3], the establishment of a joint plot-role-playing and initial forms of joint labor, the degree of formation of labor and gaming activities and their influence on the formation of children’s readiness for cooperation, joint actions [10]. In the second case, the interest is caused by problems of maturing in joint educational activities of children, including those in the age context, models of group learning task, co-operative and collective distributive forms of solution of educational tasks, the organization of group work as a new paradigm of learning – problems connected, by and large, to the formation and organization of cocurricular activities of students [20, 21]. A number of studies focuses on constructive, effective educational cooperation teachers with students [13, 28], their joint thinking activity [4].

It should also be noted that research aimed at studying more specific activities, such as the collective thinking activity [24] the joint creative activity [14], group gaming activity include game in the virtual environment [25].

Another direction of the application of the ideas of the importance of social organization of cooperation in solving the problem is an area of the “culture” of interaction on the internet and during joint network education [31]. Researchers refer to the concepts of the zone of proximal development and cooperation in the team of adult and peers for design and creating a variety of tools for working of children in the online environment, and to create these environments in the educational process. For example, the E.D. Patarakin [17] presents the general principles of pedagogical design of collaborative networking, according to which the activities of the subjects of education is built around the creation of various types of educational products which can be generally described as “digital story”. Due to the fact that the network activity is associated with changes in digital objects, its organizers and participants have the opportunity to observe and analyze the situation of working together. The methodology of presentation diagrams of joint activities on the board with alphanumeric notation that allows discussion and analysis of qualitative data on participants in groups, which are formed in the course of educational or socio-educational projects is offered. Technology and methodology of static and dynamic diagrams helps to analyze and discuss the situation arising in the course of joint network activity.

Influence of culturological features of the subjects of social groups, especially emerging in the educational process on the effectiveness of the quality and features of their operation remains poorly studied. It is not enough studied also backbone factor and the cognitive component of joint activities.

Also, physiological processes, such as neurophysiological and somatic-vegetative mechanisms ensuring human integration into a joint group activities, which in modern terminology refers to the new neuroscience “neuro-socio-ethology.” remain poorly studied. These processes are increasingly investigated at zoo-social interactions of mammals and birds [6, 11, 22]. Differences zoo-social forms of behavior, their severity depending on the sex, and in subjects with depleted social and cognitive experiences are shown. Some neurophysiological and neurochemical mechanisms of formation of various forms of their social relationships are found out. Part of the front regions of the cortex in the regulation of zoo-social behavior, and hemispheric asymmetry are revealed. Differences neurotransmitter systems of the brain, in particular the dopaminergic, serotonergic, and endogenous opiate are shown [19, 23].

In recent years, some groups of authors began the study of synchronous changes in the activity of different brain regions of people working together, by registering the spectral-coherent characteristics of their electroencephalograms and fMRI mapping. As far as we know, Duane and Behrendt [8] were the first who carried out simultaneous recording of EEG brain activity of several subjects. They were trying to calculate correlations between electroencephalographic characteristics of two people. This multi-subjective EEG analysis technique then for a long period of time has not been claimed, but has been revived in recent years and was named “method of hyperscanning” [16]. Since then, researchers have begun to use hyperscanning for analysis of correlations of activities of the brain structures of the two people in the process of inter-subjective social interactions [2]. At the moment the coherence of the activity of brain structures in civil aviation pilots while working together at the gym is shown [27]. It is proposed by using hyperscanning to explore the emotional component of the interaction of several subjects in the process of listening to music [1]. Other authors using hyperscanning of magneto encephalograms show the dependence of synchronous activation and correlation of brain activity of 2 subjects in the kinematic problems, depending on their role in the process of interaction: leadership or statements of subjects during the joint activity.

Some authors [9] believe that if neural mechanisms of inter-subjective coherence of brain activity were accurately identified, it would be quite acceptable to use them as neuro-markers of quality of social interactions in everyday life, and as neuromarkers of quality of processes of learning and could be a measure of the success of the learning process in educational environments.

The analysis of the data of domestic and foreign scientific literature shows that there were practically no such transdisciplinary research of educational processes: with a comparative analysis of the general cultural development, cognitive abilities, psychophysiological and neurophysiological provision of individual and joint activities of human subjects. There are scientific works tackling only fragments of the whole problem and solving just its solitary tasks. For the first time ever the intersubjective interactions are proposed to be considered and examine holistically and at different levels as follows:

2.1 in the educational process;

2.2 in the test model of joint activities;

3. The linguistic coherence: a comparison of the space-time structure of sentences in writing by the subjects of the educational process, including teachers.

4. The psychological and emotional coherence.

5. The physiological coherence of the subjects of joint activities:

5.1 in terms of EEG activity of different brain structures,

5.2 in terms of heart rate variability, reflecting the processes of vegetative regulation of cardiac activity and psycho-emotional tension.