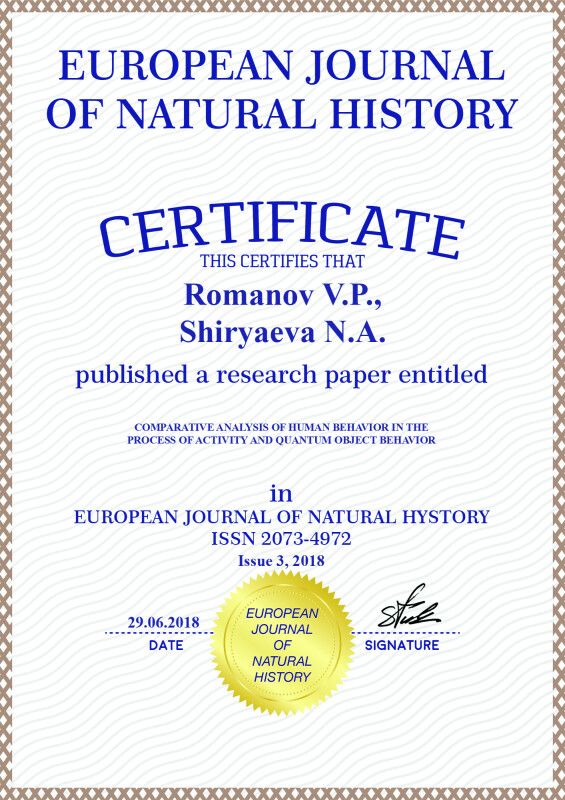 Aspects of random character of behavior of an individuum in the process of an activity would be considered in the context of acquiring knowledge, due to the fact that now study of probabilistic-statistical character of human behavior succeed mostly in this area of activity. In paper [6] probabilistic-statistical student model is proposed, according to which student is identified with distribution function (probability density), moving within information space of coordinates, velocities and accelerations of various orders. This is based on the fact, that human knowledge is a product of consciousness, which determinism is realized through randomness. Hence, it is impossible to define exact position of student in information space, one could only define probability to find him in a targeted area of information space. It is worth noting, that collective result of human semantic activity is understood under the term “information space”. In terms of informatics and technical sciences it is customary to measure information in “bits”, while in pedagogics “mark” (grade) is used to estimate fullness of knowledge. One can always establish necessary quantitative relationship between bits of information and marks.

are distribution functions, which identify student in information space; σ,

System of equations (1) allows to describe human behavior in performing any activity, if space metric is known, where the activity takes place. Wave functions demonstrate similar behavior and describe behavior of quantum objects.

One of the most efficient ways to describe behavior of a quantum object is based on use of Schrodinger equation [10]:

is wave function, which represents solution of Schrodinger equation;

is potential energy operator; m is mass of a microparticle;

is Laplace operator, which action reduces to the finding of second partial derivative of the function;

, where h is Planck constant;

This implies, that integral of probability density, taken over the whole volume, should be equal to unity:

where v is volume.

The use of probability conservation law helps to write down continuity equation relating to the probability density:

We could also deduce equation (2) using joint transformation of Schrodinger equations for wave function Ф and complex conjugated wave function Ф*, moreover in this case we could find an explicit expression for probability density flow [2]:

are unit vectors along x, y and z axes respectively. Fig. 2. Radial density of probability to find an electron within an atom of hydrogen in its basic state

In itself equation (2) is identical to the first equation from system (1). The difference just lies in the forms of expressions for probability density flow, which reflect specifics of study subjects (student and quantum microparticle). These equations describe random character of behavior of study subjects in coordinate space. It worth noting, that random character of human behavior in the process of an activity is obvious and direct observation substantiate it [7], whereas random character of microparticle behavior has been experimentally proved 23 years after Schrodinger quantum theory had been established [1].

Today mathematical apparatus for solving Schrodinger equation is highly developed and allows to obtain solutions, which describe behavior of single microparticles as well as behavior of quantum systems. Fig. 2 shows radial density wr of probability to find an electron within an atom of hydrogen [2], where r is radius;

Compatible analysis of behavior of an individuum in information space (Fig. 1) and microparticle in common space (Fig. 2) shows their equivalence in qualitative terms.

Discussion of the results

From the above it follows, that determinism of human behavior as well as behavior of microparticles is realized through randomness. This reflects the unity of the world at large, and hence, generality of its fundamental laws. However, study objects have natural specifics, that affect their behavior. Let us consider them in more details.

Every human in the context of psychic and somatic processes, occurring inside, is individual, so, as mentioned above, its consciousness development level will differ from one another. These differences affect human behavior, and hence, in this case so-called discriminability principle works. According to this principle we could theoretically, by solving the required equations from system (1), and experimentally observe the behavior of every single human being. In quantum mechanics indistinguishability principle works for microparticles of the same grade, according to it all microparticles are identical and couldn’t be distinguished from one another.

Equation system (1) allows to describe random character of behavior of an individuum not only within coordinate space, but also within information space of velocities and accelerations of various orders, while Schrodinger equation allows to describe random character of quantum object behavior only within coordinate space. This points to the fact, that in science terms human behavior in performing certain activity turns out to be more interesting and rich, than that of quantum microparticles.

1. Determinism of human behavior in the process of acquiring knowledge, moving within information space, as well as behavior of a microparticle, moving within common space, is realized through randomness. In this regard non-classical probabilistic-statistical method is used to describe behavior of such objects.

2. Random character of human behavior in the process of its activity is realized not only within coordinate space, as it occurs for microparticle, but also within information space of velocities and accelerations of various orders.

3. While describing human behavior in the process of any activity its individual characteristics are taken into account, i.e. “discriminability” principle works, whereas when we describe behavior of quantum microparticles of the same grade “indistinguishability“ principle works, due to the fact that these microparticles have identical characteristics, and this simplifies solution of practical problems.