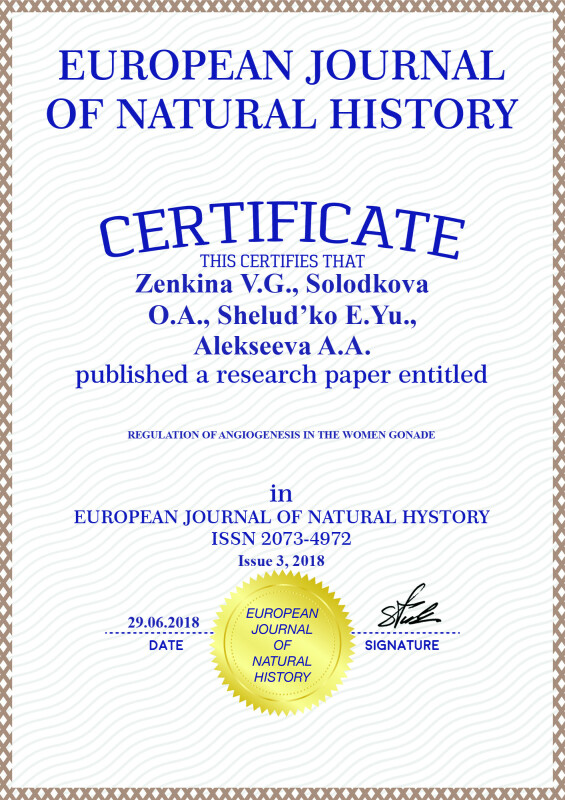 REGULATION OF ANGIOGENESIS IN THE WOMEN GONADE

The vascular system provides a full-fledged operation of any organ, including the ovaries, in which even a short-term disturbance of the blood supply leads to persistent changes in reproductive and endocrine functions [7, 24, 42, 43, 44]. All the main processes of the reproductive cycle in women are closely related to the formation of new vessels, angiogenesis, which is tightly regulated, especially during pregnancy [3, 6, 41, 42]. Regulation of angiogenesis presupposes the presence of mechanisms that induce the development and integration of vessels that accelerate or inhibit their growth [6, 40, 44]. Unlike most other organs, the formation of new blood vessels in the female reproductive system is a natural physiological process that takes place in the sexually mature age. With the development of pathology, this process is disrupted, resulting in destructive changes in the ovaries [6, 7]. Disturbances of angiogenesis are accompanied by a variety of ovarian diseases (benign and malignant tumors, polycystic ovaries, endometriosis, follicular cysts) [8, 12, 41, 44]. Today it has become clear that the cellular and molecular mechanisms regulating the growth, development and regression of blood vessels are also key factors that ensure reproduction processes, which is one of the reasons for interest in this problem.

Regulation of angiogenesis is carried out by cellular and molecular mechanisms that promote the formation of vascular networks of follicles and the yellow body and their remodeling in different phases of the cycle. In adults under physiological conditions, the process of angiogenesis is under strict control of the body’s regulatory systems, which provide a delicate balance between stimulants and angiogenesis inhibitors [14].

The effect of vascular endothelial growth factor (VEGF) on angiogenesis in the ovaries is a proven fact. Expression of this factor was found even in egg cords and developing follicles, ovarian stroma in perinatal ontogenesis [9, 13, 23]. Immunohistochemically, expression of proteins and mRNA for various VEGF isoforms and in the definitive female gonad, namely in ovules, granulosa cells and ovarian stroma of girls and women at different ontogenesis periods, has been observed [14, 22]. According to the authors, the presence of receptors for VEGF-α, especially granulosis, suggests that this factor participates in folliculogenesis, arousing primordial follicles and continues its action in the preantral [1, 2, 22]. Several studies have shown that the vascular system has a significant influence on the early development of egg balls, primordial follicles and some other ovarian formations [22]. The main factor of vasculogenesis is endothelial growth factor, which plays an important role in endothelial cell differentiation and development of the vascular bed of the organ. VEGF is also part of a system that restores the supply of oxygen to tissues when blood circulation is inadequate. Treatment with VEGF promotes the activation of primordial follicles, providing an alternative approach to stimulating the early development of follicles [1, 3, 13].

The growth factor of fibroblasts (FGF) is a promising angiogenic molecule that modulates the growth of blood vessels during their neoplasm. FRF (both acidic and basic) is a potential mitogen. It is believed that FGF stimulates angiogenesis by directly affecting endothelial cells, while the transforming growth factor (TGF-β) exerts indirect influence, “inducing” other cellular types to isolate factors that stimulate endothelial cells [17]. It is likely that FGF can be released from cells as a result of their damage [19]. Other members of the family FRF, for example, the proto-oncogene int-2 (FRF-3), freely secreted in embryogenesis, can serve as initiators of angiogenesis in the development process [44].

Transforming growth factor-β (TGF-β) – is important in many cell types as a regulator of cell proliferation, angiogenesis, cellular remodeling and other cellular processes. TRF is necessary for normal growth of the follicle and luteinization of the latter. An increase in the expression of the transforming growth factor in the preovulatory follicle has been demonstrated, reaching a maximum during ovulation [19, 39]. TRF-β1 is essential in the stabilization and differentiation of pericytes, hence, the integrity of the vascular wall is compromised in TRP-β1-deficient mice [21]. Follicular ovary cells expressing TRP-β1 contribute to the proliferation and differentiation of granulosa cells, which certainly helps in the growth of the dominant follicle. Most researchers believe that the transforming growth factor-β indirectly, through the VEGF, and in conjunction with the fibroblast growth factor participates in the formation of the vascular ovulatory cascade [19, 20, 21, 39]. TPPβ (primarily TRPβ-1) is considered a potent inhibitor of endothelial cell proliferation in vitro, but it is also able to induce angiogenesis in vivo [25, 38].

The nerve growth factor (NGF) is one of the most important in the physiology of the ovaries. Already in newborn rats, FSH receptor expression is detected, which is stimulated by a nerve growth factor. The lack of action of this factor contributes to the delay of folliculogenesis at the stage of small antral follicles, delayed puberty and disruption of estrual cyclicity. Along with previous factors, this is involved in the preovulatory pulsation of gonadotropins and promotes ovulation [21, 28]. NGF probably stimulates and angiogenesis, induces the expression of angiogenic molecules in many tissues, including the ovary, but can be neutralized by the neurotrophin, which reduces neovascularization. According to some authors, NGF for several hours before ovulation increases and enhances the cascade of expression of other growth factors, increasing the area of blood vessels and their rupture. This study reliably shows that NGF promotes the enhancement of angiogenesis-dependent parameters: the expression of proangiogenic molecules and the number of ovarian blood vessels [21, 35]. It is also reported that NGF is capable of activating the proliferation of endothelial cells, regardless of the content of the VEGF, is capable of increasing the area of the ovarian vessels, which is fundamental in the cyclic physiology of the female gonad. In addition to NGF, the neurotrophic factors bdnf, HT3 and NT4 in the neonatal ovary [21] have been described, some of which are associated with the development of the early follicular stage. NGF and neurotrophin receptors have been implicated in such processes as steroidogenesis, FSH receptor expression and proliferation of somatic cells in rodents and human ovaries [28, 35]. These results are the first and confirm the angiogenic effects of NGF in the ovary of rats, giving a new look at its role in the function of mammalian ovaries.

Vascularization of the ovary during the reproductive period of ontogenesis is regulated by factors such as delta-like ligand 4, thrombospondin-1, prokineticin-1 and prostaglandin E2 [12]. All these factors contribute to the survival and functioning of the ovarian reserve in different ways and prevent abnormal angiogenesis [12]. The role of acid cysteine-rich secreted proteins in key angiogenesis processes in the luteinization phase are elucidated. The role of these proteins in the regulation of proangiogenic factors and components of the extracellular matrix of the follicle during luteinization is shown [44].

The role of cytokines, in particular tumor necrosis factor, interferon gamma, Fas ligand for angiogenic activity and VEGF mRNA level, as well as its receptors throughout the luteal stage has been determined [15]. The dependence of angiogenesis in the development of the yellow body, luteolysis from the action of these cytokines is shown [15]. Especially important is the effect of the action during pregnancy, due to the active secretion of progesterone. Vazoinhibin-1 was found in the yellow body endothelium, acting as a negative feedback regulator of angiogenesis and lymphogenesis in the yellow body of ovaries of cows [30]. Evidence of leptin involvement in the angiogenic process at an early stage of formation of the yellow body is presented [37]. This involvement is associated with growth factors that are expressed in response to an increase in leptin content in ovarian tissue, namely, fibroblast growth factor, angiopoietin-1 and vascular endothelial growth factor.

Ovary is an important organ for studying angiogenesis and vascular function. In one study, a model for the expression of elements of the Notch signaling pathway in the ovary and the key roles of the regulatory pathways of Notch transmission in angiogenesis in pathological conditions were determined. This pathway is a promising target for the treatment of angiogenesis disorders in the treatment of ovarian diseases. A series of Notch pathway inhibitors has been developed, including monoclonal antibodies aimed at blocking Notch ligands / receptors, gamma-secretase inhibitors, peptides aimed at blocking the transcriptional complex. Thus, components of the Notch signaling pathway are targets for regulating abnormal angiogenesis and other pathological processes in the ovary. In addition, the role of the Notch signaling pathway for anovulation, ovarian production of androgens, and polycystic morphology, which are closely related to ovarian angiogenesis, have not been fully elucidated [34].

Defects in the regulation of angiogenesis can be associated with a variety of pathologies, such as polycystic ovary syndrome (PCOS), endometriosis and most neoplastic processes [18, 44]. Polycystic ovary syndrome is one of the most frequent endocrine pathologies among women of reproductive age. Women with polycystic ovary have an increased ovarian blood flow, which is probably due to a higher serum VEGF level found in these patients [22, 26, 33, 44]. Ovarian enlargement is observed in rats with steroid-induced polycystosis and intraovariant neutralization of the nerve growth factor. This mechanism cannot be excluded in cases of some forms of polycystic ovary, infertility and other processes associated with disorders of angiogenesis, due to the fact that there is a disruption of the NGF release and, therefore, aberrant products of the VEGF [5, 10]. It has been found that an increased level of VEGF in serum and follicular fluid contributes to all clinical manifestations of this syndrome, such as anovulation, oligomenoreya, giperandrogeniya, obesity and insulin resistance [2, 11, 31, 32]. Some authors on the model of dehydroepiandrosterone-induced PCOS show the effect on the VEGF level, leading to a partial restoration of folliculogenesis, improvement of ovulation, and the development of follicles. Therefore, inhibition of angiogenesis in the ovaries can be considered in the treatment of such patients with the purpose of restoring the function of the ovaries [2, 36].

Another acute problem is endometriosis, including endometriosis of the ovaries. Since the implantation of endometrial fragments on foreign sites requires neovascularization, angiogenesis plays a key role in the growth of these ectopic implants. In one study, it was determined that the areas of the ovarian endometrioma exhibit an aberrant blood vessel formation indicative of angiogenesis in these ectopic tissues [29]. To confirm neovascularization, an immunofluorescence study was carried out with an antibody against von Willebrand factor in the early and late stages of ovarian endometriosis. It was found that this factor is specific for blood vessels and exhibits increased expression in the late stages of the disease. Also, an important regulator of the angiogenic environment, cyclooxygenase-2, was determined at different stages of the disease. Expression of cyclooxygenase-2 was significantly increased and was found to be localized both in the glandular epithelium and in the stromal cells. VEGF is an indispensable factor of angiogenesis, as it regulates proliferation of endothelial cells, germination, assembly, lumen development, permeability and vascular distribution. In this experiment, the main factor of angiogenesis was significantly increased with the course of the disease, which confirmed the involvement of angiogenesis in the progression of ovarian endometriosis [29].

And finally, ovarian cancer, one of the most common, life-threatening, gynecological neoplasms, is a heterogeneous, rapidly progressing and very dangerous disease. Angiogenesis is a sign of ovarian cancer, and it is a key process that promotes tumor growth and metastases. The increased vascular density in ovarian cancer was positively associated with an increase in the incidence of metastases, as well as a decrease in patient survival [35, 44].