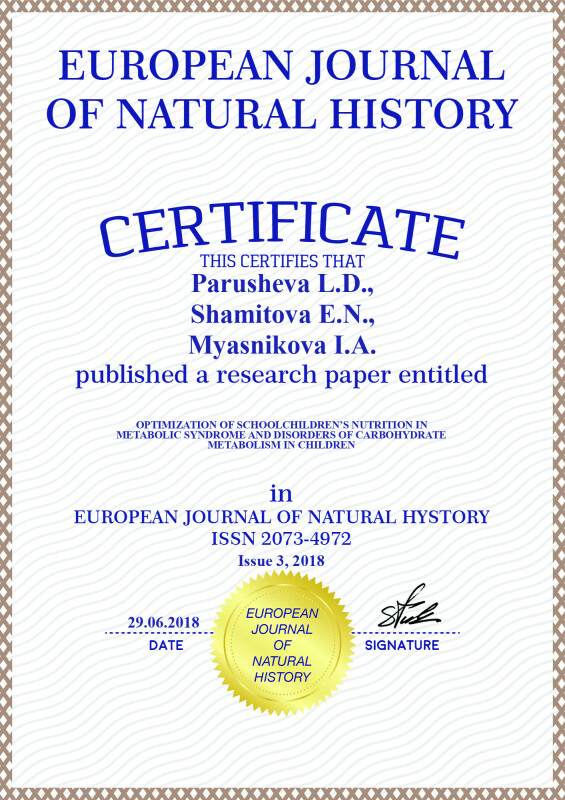 Studying physiological parametric characteristics of carbohydrate, protein and lipid metabolism, detection of frequency and developmental patterns of their disorders are especially important in childhood and adolescence, when all metabolic processes, like the organism in general, undergo significant changes: regulatory and transport systems are restructured, and an adult type of metabolism forms. An important role belongs to lipid metabolism in the processes of vital activity of a human body; being one of the components of biological membranes, they affect their permeability, regulation of intercellular interaction and intracellular processes, participate in energy metabolism, and are also used in synthesis of hormones and enzyme systems [6, 7]. A factor for the development of violations of carbohydrate and lipid metabolism is obesity, and for people with a high risk of diabetes heredity is important, as well as early detection of major metabolic disorders and development of metabolic syndrome (MS). In modern world, a complex of hormonal, clinical and metabolic disorders is implied by metabolic syndrome that is associated with type 2 diabetes mellitus and is a risk factor for the development of cardiovascular diseases, which is based on compensatory hyperinsulinemia (HI) and insulin resistance (IR) [7, 10]. Diabetes mellitus is an endocrine disease associated with impaired glucose uptake as well as insulin hormone insufficiency, resulting in hyperglycemia – a persistent increase of glucose in blood. There are α-cells and β-cells that are found in the cells of pancreatic Langerhans islets, producing glucagon and insulin, to increase and lower blood glucose levels [1, 2, 4]. The disease manifests a chronic course as well as violation of all types of metabolism: carbohydrate, fat, protein, mineral and water-salt. Most often, pathology of carbohydrate metabolism is hereditarily transmitted, it manifests at an early age in children, at least one parent of whom is diagnosed with “diabetes mellitus”. A child whose mother was diagnosed with gestational diabetes during pregnancy may also be in risk group [9]. In excessive weight, there is violation of carbohydrate metabolism, that is a change in tolerance to carbohydrates and proven hyperinsulinemia. With increasing duration and obesity degree, these disorders can increase. The pathology of carbohydrate metabolism is diagnosed in obese children and adolescents and represents as glycemia and impaired glucose tolerance [2, 3]. The prevalence of impaired tolerance to carbohydrates among obese children and adolescents aged 4-10 years is 25 %, among children 11-18 years old – 21 % and 4 % in adolescents with obesity having diabetes mellitus. When glucose intake is excessive, it is utilized in the form of glycogen in hepatocytes. And regulation of glycogen formation and decomposition is under hormonal control. The main ones are glucagon and adrenaline. Fatty hepatosis is a chronic disease where hepatocytes degenerate into adipose tissue. It is abdominal accumulation of fat that is associated with the development of hormonal and metabolic disorders. Excessive consumption of fatty foods rich in lipids without rational physical activity leads to deposition of “excess lipid energy” in the form of triglycerides in the subcutaneous fat [5, 7]. Gradually obesity develops. When a child has excessive weight, this disease is influenced primarily by genetic factors and environmental factors. An important role in the metabolic syndrome is played by digestive organs. Chronic stress is a factor in the development of metabolic syndrome as well as diseases of the digestive tract, which are formed with prolonged and excessive exposure to internal and external stress factors, hypothalamus dysfunction, vegetative department of the central nervous system, which disrupts the peristalsis and tone of smooth muscles in the digestive tract, hyperproduction of gastrin and hydrochloric acid. Progression of these disorders is hypersecretion of catecholamines, glucagon, cortisol, which is manifested by a decrease in the resistance of gastric and intestinal mucosa, damage to the liver parenchyma and the pancreas. Emotional-personal and psycho-vegetative disorders lead to various forms of eating disorders. When there is a change in diet, intake of large amounts of food disrupts the biological rhythm of the digestive tract functioning. This contributes to maintenance and formation of motor-evacuation disorders and, as a consequence, development of inflammatory changes. The role of chronic inflammation is not ruled out, in the genesis of which cytokines of adipose tissue and activation of lipid peroxidation play an important role. Thus, the metabolic syndrome as well as disorders of carbohydrate metabolism in children and adolescents remain a complex and currently completely unexplored problem [7, 8]. An important pediatric problem allows us to consider this symptomatic complex of thrombogenic, atherogenic, diabetic complications in adolescence. To fully study the pathogenetic mechanisms of metabolic syndrome in children, only joint activity of pediatricians with endocrinologists, gastroenterologists and cardiologists will make it possible to identify the spectrum of clinical manifestations, focusing on earlier symptoms that are its predictors. This will allow to develop methods of targeted prevention of cardiovascular pathology and type 2 diabetes mellitus. Diseases of the digestive and reproductive system contribute to reducing the risk of early disability and premature death [10].

Proteins are the main components of cells in all organs.

Carbohydrates are complex organic compounds that are a source of energy.

The basic principles for organization of rational nutrition remain relevant for people of all ages [9].

1. For a child’s energy consumption, an adequate energy value of the diet is needed.

2. A balanced diet for all substitute and irreplaceable nutritional factors is necessary.

3. The main condition for ensuring balance is maximum variety of diet.

5. Adequate culinary and technological processing of food and products should ensure their high taste values and preservation of their original nutritional value.

6. Individual characteristics of children should be taken into account.

7. Compliance with all sanitary requirements for the state of a food unit, food supplied, transportation, preparation, storage and distribution of food – ensures food safety.

Organization of food intake for schoolchildren aged 10-17 years has its own peculiarities: they are to take into account all those changes that occur in a child’s organism at this age. During this period, special attention should be paid to the following points:

Chemical composition of a product set