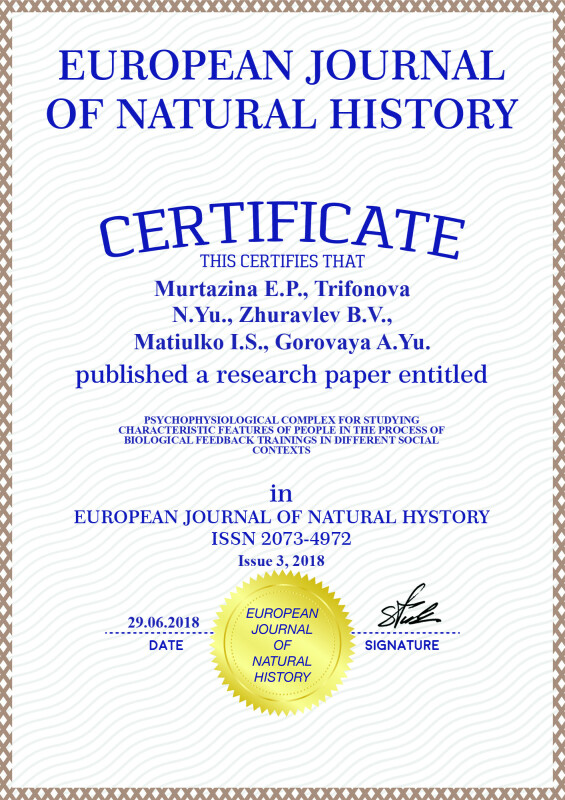 Studies of psychophysiological features and neurophysiological mechanisms of social relationships between people in the family, cultural, educational, and professional activities in the human community are issues of importance for many scientists. Different researches and surveys have been launched to study the relationships between mother and child [11, 13, 16], singers and musicians [17, 19], performers and the audience [1], circus jugglers [10]. Some authors also have studied the psychophysiological mechanisms of interaction between doctor and patient [7]. The neurobiological basis of the cooperative social behavior has been investigated by using economic games that allow to reveal the direct, indirect, and generalized reciprocity and altruism in individuals [18].

Nowadays, the researchers use awide variety of sensorimotor tests in which two or more subjects have to simultaneously perform different tasks in different contexts: individual, competitive or cooperative ones [14, 20]. As an example, there are studies on the role of negative and positive feedback in the effectiveness of cooperation between individuals [5, 6].

Psychophysiological processes, including neurophysiological and somato-vegetative mechanisms involved in the integration of a person into joint group activity has been studied insufficiently which. In modern literature, these processes are referred to a new field of neurosciences called “neuro-socio-ethology”.

As far as we know, Duane T.D. and Behrendt T. [8] were the first who performed simultaneous EEG recording of the brain activity in several subjects. They tried to calculate the correlation between the electroencephalographic characteristics of two people. Previously, this multi-subject technique of the analysis of the brain activity was not commonly used by researchers. However, it has been recently revived and called the “hyperscanning” method. Some research groups have increasingly begun to study the synchronous changes in the activity of different brain regions in people performing joint activities by recording the spectral-coherent characteristics obtained through the methods of electro- and magneto- encephalography, as well as fNIR and fMRI-neuroimaging methods.

The hyperscanning technique is also frequently used to reveal and analyze the correlation between the activity of different brain structures of two people during the intersubjective social interaction [3, 4, 9, 19]. For the present, the coherent activity of the brain structures is shown in civil aviation pilots during their joined activity on training vehicles [22]. It may be also assumed that the method of hyperscanning may help study the emotional component of interaction between some individuals while they are listening to the music [1]. In other studies, the researchers, using the method of hyperscaning of magnetoencephalograms, found that the synchronous activation and correlation betweenthe brain activity of two subjects in kinematic tasks depend on the role of individuals during interaction: leadership or fellowship [12, 21]. It is believed that determination of the neural mechanisms of intersubjective coherence of the brain activity would allow to use these mechanisms as the neuromarkers of the quality of the social interaction in daily life and professional activities [15]. However, in many studies, the researches use different and often disparate models of individual and joint activity.

Taking into account the abovementioned, the aim of this study was to develop and approbate computer–based models of competitive and cooperative interaction between two subjects and to perform comparative study of the psychological and neurophysiological mechanisms of competition and effective cooperation.

The complex included synchronous recording of electrocardiograms in the standard lead in two subjects using the hardware-software system “Varikard” (LLC “Ramena”, Ryazan, Russia). The standard values of heart rate variability (HRV) were calculated in accordance with the “International Standard for Registration, Physiological Interpretation and Clinical Use of Cardiac Variability” 1996. The analysis of HRV parameters was carried out at all stages of the survey: starting from the background state of operative rest, then with individual and joint activity for each subject separately. In addition, a cross-correlation analysis was performed to compare the dynamic of changes in the HRV parameters of the two subjects.

Coherence and spectral capacities in the cerebral cortex regions were calculated and then compared in the following EEGfrequency ranges: theta, alpha 1 and 2, beta 1 and 2 rhythms. Synchronous ECG and EEG registration allowed to perform the cross-correlation analysis of the characteristics of HRV and EEG in both of the subjects.

Therefore, in order to determine the role of the emotions and the cognitive impact of an inefficient joint activity (competition and cooperation), neurophysiology response to the particular condition was explored using the measurements of behavioral, electroencephalographic (EEG), cardiac and autonomic (by biofeedback device) parameters. In the present study we first performed the complex analysis and monitoring of these components all together in order toprovide a complete analysis of the emotional impact in the case of inefficient cooperation.

Modelling individual learning, competitive and cooperative behavior in the dyads was performed using the “BOS–Kinesis” program (OOO Neurotech, Taganrog city, Russian Federation). This software and hardware complex is based on thetelemetric recording of physiological signals and consequent appliance of the characteristics of these signals as biofeedback (BFB) in a variety of trainings. Registration of the electromyographic signals (EMG) was performed with the “Kolibri” sensors that were attached to the skin of the hands at the area above the flexor muscles of the leading hand of a participant. The “BOS–Kinesis” program provides the apparatus for online mathematical data processing of the EMG signals, which is converted into the dynamics of changes in the total spectral power of the EMG. In our study the values of the spectrum power were determined by the dynamically changing height of the column displayed on the screen so that the participant can see the result of his actions. Five–second calibration of the EMG signal was performed at the beginning of each training session, during which the participant was instructed to make the maximum wrist flexion with the sensor installed onit.

At the first stage of the examinations, two subjects were trained individually (3 sessions, 3 minutes each). After that, the participants had to perform a BFB EMG training together in a pair in the competitive context. Before the session began, they were instructed to follow competitive nature of the test. A person who acquired a higher score of effectiveness was considered as the winner. During the training session, the participants were sitting in front of one monitor which showed two bars each of which reflected the effectiveness of the corresponding person. Similar to the stage of individual training, the parameters of performancewere obtained for each participant in the pair during competition.

At the next stage of the testing procedure, we studied psychophysiological processes during cooperative activity of two subjects using the same BFB EMG training methodology. The same as in the previously described stage, the subjects sat next to each other in front of one monitor. However, unlike the previous stages, the subjects were instructed to cooperate their actions in order to regulate the height of one common column by changing muscle tension. The height of the column was determined by the dynamic pattern of the result and calculated by the individual parameters of the participants. Before conducting the test on cooperation, the procedure of calibration of the EMG signal was performed for both subjects in order to correctly evaluate the contribution of each subject to the result.

The evaluation of the cooperative activity was performed under two conditions: 1) when the subjects saw the dynamic changes in both common and individual columns; 2) when they could only see the common column without feedback about the success of maintaining the height of the individual columns; this situation was considered as so-called blind cooperation based on integrated joint performance. After the sessions of cooperative activity, individual performance indicators, as well as integral indicators of the dynamics of changes in the resulting height of the common column were calculated and analyzed.

The developed psychophysiological complex also included video recording of the individual and joint actions of the subjects, as well as the changes in the results of the BFB EMG trainings displayed on a computer monitor. These records were fully synchronized with the recorded EEG activity, which further allowed to perform a qualitative temporary post-line analysis of the correlations between the changes in the brain activity of participants and their effectiveness at all stages of the surveys. The system of simultaneous cardiac rhythm registration in two patients was also equipped with the option of introducing on-line behavioral marks throughout the survey process.

In order to identify the changes in the physiological parameters of the EEG and HRV related to competitive and cooperative activity only, we performed the control experiment in which the participants had to perform the same task on the different computers independently from each other.

The developed in this study models were tested on healthy male and female volunteers (20–35 years old) who were paired up and people in a pair knew each other. No material reward was implied for individuals for the participation in the experimentsince it was supported by their own interest. The tests were performed after informing the subjects about the purposes of the research. The participants were introduced to the principles of Biomedical and Neuro Ethics and gave their voluntary consent to be examined and to take part in the surveys [2].

The results of the preliminary examinations of eight pairs of subjects shown that the characteristics of the BFB EMG training in the social context significantly differ from individual activity. The ratios of the periods of muscular overload to the periods of insufficient tension reflect the levels of competitive and cooperative motivation. Thus, the model of cooperation allowed to determine the leader and the follower within the dyads, as well as to identify some pairs that were incapable of effective cooperation.

All the experimental procedures were performed in accordance with the Additional Protocol to the Convention on Human Rights and Biomedicine, concerning Biomedical Research [2] and approved by the official Ethical Committee in Biomedical Research of the P. K. Anokhin Research Institute of Normal Physiology.