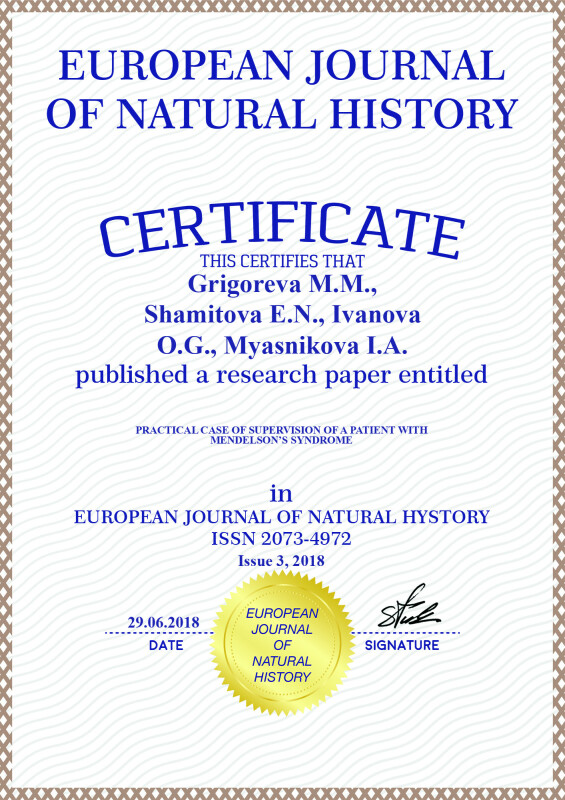 PRACTICAL CASE OF SUPERVISION OF A PATIENT WITH MENDELSON’S SYNDROME

Mendelson’s Syndrome (medical term: Gastric Juice Aspiration Syndrome) is a medical condition developing within the process of oppression of laryngo-pharyngeal reflux. For the first time, Gastric Juice Aspiration Syndrome was diagnosed and described in 1946. The author of the investigation was S.L. Mendelson. The pathologywas viewed as the most severe complication developing with improper conduct ofprenatal procedures in obstetric anesthesiology. There are the numbers of factors that predispose to aspiration or regurgitation of gastric juice: the impairment of consciousness, which are associated with being under general anesthesia or alcohol (drug intoxication); the effect of previously used sedatives; the patient’s craniocerebral injury; staying in the coma. The relevance of Syndrome is that acidcomponent of stomach goes directly to the bronchus, lungs and lower respiratory system. This results in a formation of inflammatory reaction, which is worsening due to burn of external surfaces of mucous membranes.The pathology clinical performance is developing within several minutes and is worsening within some following hours. There are 3 consecutive phases in this pathological changes: the acute laryngo and bronchiolospasm, the partial relief of bronchiolospasm and the gradual increase in the symptoms of acute respiratory failure. The aspiration pathology morphologically manifests the alveolar exudate, it contains the fibrin, polymorphonuclear leukocytes and macrophages. The strengthening pulmonary edema can affect both local areas and large areas, up to the manifestation of necrosis of alveolar septa. The Mendelson’s Syndrome is characterized by damage of the endothelium of the capillaries and vascular thrombosis. This causes atelectasis, which is associated with the gradual destruction of the surfactant lining the alveoli. The another pathological process is taking place together with this: the massive exudation of erythrocytes with the formation of hyaline membranes. When the particle of fluid enters the lungs, hemorrhagic edema first develops, gradually complicated by a granulomatous reaction with damage to the bronchioles and alveolar wall. Severity of injury depends on gastric juice acid level рН and volume of this liquid entered the respiratory system Mendelson’s Syndrome relates to iatrogenic complications. It has poor course of disease and high risk of mortality. The cause of patient death can be [1]:

Worsening of respiratory failure of1-3 grade presents on the first level of Gastric Juice Aspiration Syndrome and may cause deathresulted from asphyxiation.

According to medical statistics in Chuvash Republic [7], 0,5-1 % of deaths with use of anesthesiaare directly related to non-compliance of preventive rules and subsequent development of Aspiration Syndrome. It becomes the reason of 0,09 % of maternal mortality, and with the necessity of general anesthesia in operative delivery this figure grows up to 0,68-26 %.

Statistics and analysis of death cases evidence that not every medical practitioner has worked outsufficientawareness related to risk of developing of Mendelson’s Syndrome. For that very reason mistakes are made in methodology of prevention, diagnosis and follow-up treatment ofthe pathology [4].

All the reasons can be divided into several groups depending on the source of their origin. With a full stomach pathology occurs in patients: those who took food for 2-6 hours immediately before the beginning of surgery; having acute diseases of the digestive tract; suffering from renal insufficiency or being on dialysis; having a craniocerebral injury or damage to the skeleton; being in the coma; during the 3rd trimester of pregnancy.

Only one possible reason for Gastric Juice Aspiration Syndrome in such cases is damaging ability of chime acidity. Aggressive substrate is a cause of bad chemical burns of lungs mucous membranes resulting in development of airway edema. In the process, a rapid destruction of bronchiole and alveoli epithelial take place and also the transudation of transudate to the alveoli. The patients are diagnosed with non-cardiogenic pulmonary edema and respiratory distress syndrome.

The initial decrease of the normal tone of the cardiac pulp of the esophagus can be observed: at the patients with acute or chronic diseases of the gastrointestinal tract and lower esophagus – duodenal ulcer and stomach, esophagitis, enterocolitis, diverticulum, gastritis, hernia of the esophageal diaphragm; at the patients with signs of heartburn; at the patients who are in the state of muscle relaxation or drug depression; in the presence of esophageal reflux or chronic constipation; at the pregnant women at 2-3 weeks of gestation, this is due to the natural processes of reducing gastrin production and increasing the volume of progesterone secretion, as a result, the development of hypotension of the cardiac sphincter of the esophagus and hypomotoric of the stomach (a typical symptom of the pathology is heartburn). If pieces of undigested food together with gastric juice enter airways, mechanicalblockage of medium bronchi take place. Ultimately, it results in bronchiobstruction [1, 5, 9].

There should be signs of an increase in intra-abdominal pressure in such cases: at the patients with obesity; with fibrillation of the muscles of the anterior abdominal wall, this is periodically observed after the administration of muscle relaxants having a depolarizing effect; when the gas mixture enters the stomach during mask ventilation; with paresis of the intestine and bloating; with diagnostic or procedural palpation (or other pressure on the abdomen from the outside); often elevated intra-abdominal pressure is observed in pregnant women in the third trimester and in newborns.

In Mendelson’s Syndrome etiology the part of high acidity of stomach contents is precisely determined. The most active influence on respiratory systemis observable in aspiration of liquid with рН value no more than 2,5. If the value is higher, the lung abnormalitiesare temporary. Degree of damage is influenced by the volume of liquid from stomach that have entered the respiratory system and also the presence of pieces of food in it, that can increase destruction of mucous membrane. The lowest alarming levels are 0,3-0,4 ml/kg of body mass, or no more than 25 ml. If >0,4 ml/kg of acid contents enters the lungs, it results in heavy damages.

The pathology has 3 stages: 1. Cough, shortness of breath, cyanosis of the skin, tachycardia, lowering blood pressure. 2. In the second stage there is a temporary stabilization of the patient’s condition – dyspnea and blood pressure decrease. 3. The third stage begins approximately in 48 hours. It is characterized by symptoms of bronchitis and pneumonitis. The bacterial complications are especially dangerous. The patient may have fever, cough with phlegm, leukocytosis.

After the ingestion of gastric contents in the respiratory tract, a clinical picture appears, similar to severe respiratory failure. In addition, it is characterized by other symptoms: bronchospasm; cyanosis; dyspnea; tachycardia; progressive pulmonary edema.

In some cases initial measurements are so evident that they cause instantaneous cardiac arrest. If the patient can be resuscitated successfully then irregularities of general circulation and pulmonary blood flow will follow, against which growing arterialhypotension develops with decrease of cardiac output.

Patients appear to experience frank hypoxaemia. It results in increase of pulmonaryvascular resistance. There is increase in pressure in pulmonary artery. In the violation of tissue perfusion, metabolic acidosis worsens in conjunction withrespiratory alkalosis [1, 5, 9].

Evidence of one or other symptom is directly related to vastnessof lung tissue damage. Clinical performance can be blurred out, in thisfunctional shifts are less obvious. More severe symptomsmight become apparentin only 1-2 days after aspiration. In this, signs of respiratory failure will deepen gradually.

In connection with rapid development of the Syndrome the first place goes to preventive measures and early diagnostics.

In the first stage of Mendelson’s Syndrome moist and sibilant rale of different grade are audible.In parallel, there is increase of CVP resulting in jugular venous distention. The last symptom is obvious in visual observationwhich helps to suspect exactly the Gastric Juice Aspiration Syndrome.

The basis of primary diagnostics is a triad of symptoms – tachypnea, tachycardia, cyanosis. Besides, the doctor should pay attention to the fact that it’s impossible to eliminate hypoxaemia, even if the patient is supplied with pure oxygen for breathing. The symptom is a sign of venous blood bypass. Further symptoms of pathology are: increased resistance to inspiration, arterial hypoxaemia, “blizzard” in pneumonography [5, 6, 8, 9].

Prevention of Mendelson’s Syndrome, aimed at reducing the risk of stomach contents aspiration, lies in obligatory gastric emptying with thick gastric tube. The procedure is obligatory for parturient women and patients who are appointed by urgent surgery under anesthesia.

Experience has shown that besides regurgitation and vomiting the patient may have inactiveinflowing of stomach contents into lower segments of respiratory system. To minimize the risk of aspiration, the patient is awake when intubated. Induction is made with pulmonary agents. During the process the head end of operating table is raised, and in intubation in lateral position the

tightening of in nominate cart should be made ( Сelic method). On rare occasions use of field block anesthesia is allowed.

10-12 hours before the beginning of elective operation meal and drinks are forbidden to the patients. Maximum 50 ml of water hourly is permitted, but the complete cessation of drinking should be 2 hours before anesthesia. If necessary, antacids, Н2-blockers(not later than 1 hour before the operation intravenously injectibly) [1, 3] and prokinetics can be prescribed.Additionally, intake of acid neutralizing medicines is made, for instance, sodium citrate (30 ml 30 min before) and metoclopramide [3]. At the moment, medicines on the basis of magnesium trisilicate and magnesium, dihydroxyaluminum aminoacetate, magnesium oxide are not used for decrease of aspiration. Experience has shown that they are not effective enough in neutralizing of acid stomach contents.The fact that provides a further threat is that when entered bronchi and lungs these medicines themselves cause chemical pneumonitis [3].

Objectively: Moderate condition. The patient is conscious, adequate, moderately restless.Cutaneous integument is of pale-pink colour, clean. The temperature is 36,7С.Breathing is on her own, adequate.By percussion: there is a clear percussion sound above lung fields. Vesicular respiration in the lungs goes through all the fields, no rale. Respiration rate is 20 per minute. Peripheral oxygen saturation (SpO2)-99-100 %. Heart sounds are clear and rhythmic. There is apical systolic murmur. Haemodynamics is stable. Blood pressure is 110/70 mm mercury column.Heart rate = PS – 120 beats per minute. The tongue is wet with white coat on it. The belly is of increased volume due to gravid uterus and has limited participation in breathing.With deep palpation you feel tension. Contractions are present.To monitor diuresis a stationary urinary catheter is fixed, with it urine is taken in volume of 200 ml of straw yellow colour.

The woman is taken to surgery as a matter of urgency for delivery. Combined endotracheal anesthesia is planned (СEA). To prevent aspiration syndrome (Mendelson’s Syndrome) 40 mg of Quamatel administered by intravenous injection Н2-histamineblocking agent; head end of the bed is raised.

In general anesthesia the inflow of acid stomach comtents into airways happened. On ECG-monitor, tachycardia is 140 beats per minute, blood pressure lowered to 70/40 mm mercury column, SpO2-40 %.The endoscopist is called to the operating room. Lavageof tracheobronchial tree is made immediately with hormones, antibiotics with the following repetitive aspiration. Then the patient is intubated, the artificial lung ventilation in Volume Simv mode is carried on, Respiratory volume-550 ml, respiration rate is 12 per minute, SрО2-79 %.The respiration in lungs is harsh, goes through all the fields, isolated dry rales are audible. Blood pressure is 100/60 mm mercury column, heart rate is 120 beats per minute. The patient is delivered successfully. Extent of blood loss is 600-700 ml. The path finder in stomachisim stalled for aspiration.Рneumonography: RDS (Respiratory Distress Syndrome)I-II grade; bilateral pulmonary edema. • Le – 18*109/l. • ABB (Acid-Base Balance) – Ph -7.466 Be – -1.0 PaCO2 – 30.4 PaO2 – 129.7 PaCO2/FiO2 – 328.

In the next two days artificial lung ventilation is applied in mode Volume Simv, then ALV in autonomous breathing mode with oxygen flow under pressure. Therapeutic bronchoscopy was carried out daily.

The woman in 10 days was moved from the intensive care department to the gynecology department. Later she was released safely.

To date, issues of prevention of Mendelson’s Syndrome remain relevant for pulmonology, anesthesiology, obstetrics and emergency medicine.In the case of pathology themortality in Chuvash Republic affects 0.5-1 % of patients. To avoid the development of Mendelson’s Syndrome, a strict adherence of proper algorithm of anesthetic support is required. This is particularly true for acute surgical cases.