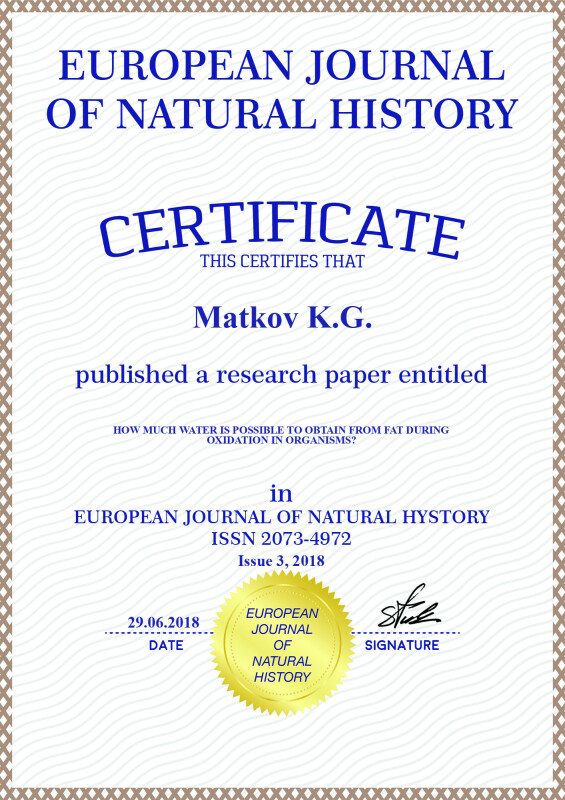 HOW MUCH WATER IS POSSIBLE TO OBTAIN FROM FAT DURING OXIDATION IN ORGANISMS?

The living organisms’ use the water as a universal solvent and it can participates in the chemical reactions and emerged from others reactions. The part of water which was formed during the process of cellular metabolism is considered to be metabolic water. There are several ways in which it may be formed: one of them through H+ HO- withdrawing from the same or different substances and interaction of protons and electrons with molecular oxygen (in the respiratory chain). The purpose of work is assessment of quantitative and qualitative of the metabolic water formed by oxidation of the main power substrate in the organism. The ways of using new formed water also will be considered.

The water formed during the fatty acids oxidation

Oxidations of organic substances in the organisms are accompanied by energy exchange. This is a main source of metabolic water. For example: palmitic acid has structure of C16H32O7 and, processed from hydrogen that can lead to maximum formation of 16 molecules H2O, however one mole which is oxidazed is followed by formation of 146 mole of H2O [1, 3, 11]. Palmitic acid belongs to the fatty acids with an even number of carbon atoms. Mainly oxidation of similar fatty acids is carried out through the following stages: activation, transport into mitochondrion, beta-oxidation, Krebs’s cycle, electron transport chain and oxidative phosphorylation. During the oxidation of palmitic acid the metabolic water, is mainly formed by two types of reactions:

The first reaction is catalyzed by FoF1ATPase. If considered that the coefficient of oxidizing phosphorylation (P/ О) NADN is equal to 2.5 ATP [7, 9] on each molecules of NADN are synthesized by 2.5 molecules of ATP and consequently the same amount of water. Each number of electrons and protons which are transferred to molecular oxygen from the redox coenzyme can give one more molecule of water. Thereby 3.5 equivalents of H20 are formed in a case with NADN. It is easy to count that one molecular palmitic acid during oxidation is formed from 31 equivalents of NADN or 31 x 3.5 = 108.5 equivalents of H2O.

In case of use of Р/О = 3 or 2 for NADN and FADN2 respectively [1, 8] the amount of water formed will be 31x4 = 124 and 15x3 = 45 and total 169 equivalents of H2O. Calculations in oxidation of palmic acid presented by Lehninger’s show that 1mole will give 146 mole of H2O [1]. If from 169 to subtract 23 (the water which is used at stages beta-oxidations and Krebs’s cycle) will give the same 146 equivalents of H2O. The equations offered for calculation of balance of water are labor-consuming therefore it is simpler to use the equations offered by author earlier [3].

The water formed during the triacylglycerol oxidation

The catabolism of triacylglycerol (TAG) consists of the stage hydrolysis to free fatty acids and a glycerol with the subsequent oxidation of products. Stages of fatty acids oxidation include oxidation of a glycerol which is formed through transformation in dihydroxyacetone phosphate, glycolysis, oxidative decarboxylation of pyruvate, Krebs cycle, electron transport chain and oxidative phosphorylation. For a quantitative assessment amount of water which is formed during oxidation TAG we used the follow equation H2Omet tg = 8 (m1 + m2 + m3) – 1.5a + 2.5 [3] where m – the amount of atoms of carbon in fatty acid; a- the number of double bound in the fatty acid. Adding the corresponding number of atoms in the equation, we calculated water balance of oxidation 1-palmito-2-oleo-3-stearoglitserol: The oxidation of carbohydrates and water formation

Formation of water during of oxidation of proteins

The catabolism of proteins includes the following stages: hydrolysis of proteins to amino acids, deamination or transamination, transformation of a carbon skeleton of amino acid to an intermediate metabolite of Krebs cycle, Krebs’s cycle, electrons transport chain, oxidative phosphorylation. Because, there is a wide variety of amino-acids compositions in food and endogenous proteins only approximate calculation is possible. The calculation which is carried out for glutamic acid gives 4.04 g of H2O on 1 g of a substratum. According to reference data for proteins this size is equal to 0.41 g on 1 g of proteins (Fig. 3) [6].

The daily amount of metabolic water

The diet consisted of triacylglycerols 100 g, and carbohydrates 400 g, and of protein 100 g [3] gives 873 g of H20 on 100 g of oxidation a triacylglycerols, from 1520 to 2120 g of H20 on 400 g of carbohydrates, 404 g of H20 on 100 g of protein (calculation was carried out with use of the data obtained by the author). Summarizing the results received above the daily amount of metabolic water will be from 3397 to 2787 g. This is enormous quantity which much exceeds these literatures data- 300 g of H2O per days of [4, 5, 6, 8]. People don’t excrete this amount of water in the environment. The seeming paradox is easily explained by recirculation of the received water in ATP synthesis and decay. The most part of the water received in ATP synthesis reaction is then used in the exergonic reactions of hydrolytic splitting of ATP to ADP and Pi or to AMP and PiPi. In a day a person will metabolize about 400 g of endogenous protein (in hydrolysis reactions) and several hundred grams of an endogenous glycogen. Hydrolysis of food polymers in a gastrointestinal tract also uses a huge amount of water. Therefore, each molecule of metabolic water will be reused, gradually leaving the organism in accordingly with his need for water.

Possible participation of metabolic water in work of FoF1ATPase

The final stages of carbohydrates, proteins and triacylglycerol catabolism is followed by formation of metabolic water, formed in the mitochondrion. Therefore the bulk of metabolic water is formed in these organelles. It is known that mitochondrions can change the volume, increasing or reducing [2]. Organelles should have an effective system of water removing by osmosis is unreal. At the cytoplasmatic membranes of many cells aquaporins exist which form the channels for water; however such proteins are not found in an internal membrane of mitochondrions. The most suitable applicant for a role of the water channel is FoF1ATPase which makes the return transfer of protons to mitochondrions matrix. Protons in the water environment are connected with a water molecule forming a hydroxonium ion (H3O +). If the hydroxonium ion freely moves in matrix on the channel formed by FoF1ATPase, then it is reasonable to assume that the same channel can be used for a transfer of the metabolic water outside. In the reaction catalyzed by FoF1ATPase there are conformational changes in catalytic beta-subunits of the enzyme [10]. Allegedly, return to initial conformation of these subunits can be performed due to the fact that the metabolic water hydrostatic pressure which is coming out through FoF1ATPase. Thus, recurrence in work of the enzyme is maintained both by ions a hydroxonium, and the hydrostatic pressure of metabolic water.

The formation of water in the respiratory chain

Process of transfer of electrons in a respiratory chain is accomplish by their transition from high energy levels to lower and the marked-out energy and is used for creation of transmembrane electrochemical potentially. It is logical to assume that the water formed by such electrons shall be more low-energy, than which is formed by other methods. We will transform Enstein’s equation E = mc2 to m = Е / c2. Solving, this equation we will receive that transformation of electron leads to lowered energy, as result it’s weight will decrease. The facilitated electron will leave on more distant orbitals that can increase a valence angle between oxygen and two atoms of hydrogen in a water molecule. Time of existence of such water will be measured in nano seconds, but it can be enough for making biological effect. For example, such water can enter to competitive relations with water of hydrate covers biopolymers can change their activity, and therefore a metabolism and transport through a mitochondrial membrane.