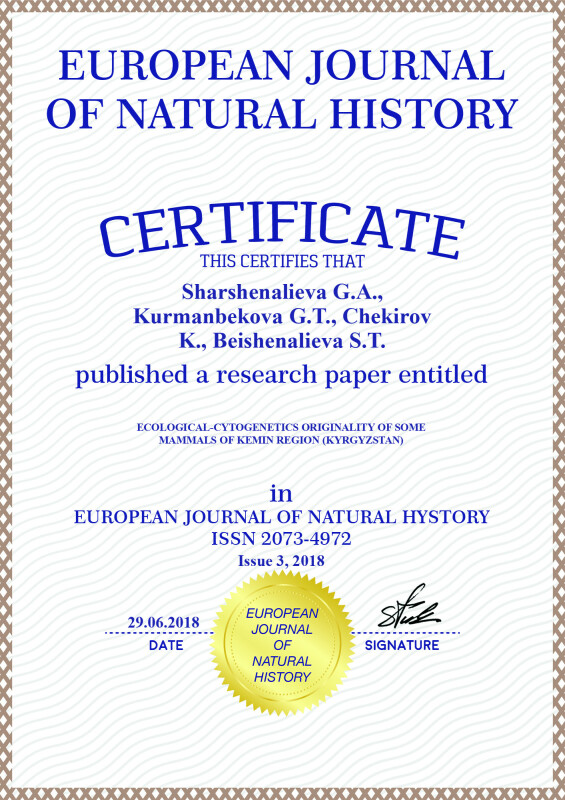 ECOLOGICAL-CYTOGENETICS ORIGINALITY OF SOME MAMMALS OF KEMIN REGION (KYRGYZSTAN)

Article in PDF
3260 KB
The results of study of karyotypesof isolated mammal, living in mountain conditions of Tien-Shan are given in this article. Additions in karyologic isolated mammal, living in mountain conditions of Tianshan are brought. Stability karyotype – the house mouse, the wood mouse, gray hamster, a big-eared hedgehog, the bat-dwarf in all breadths of their geographical spaces-lives is determined. For the first time in Kyrgyzstan chromosomal polymorphism inside a kind, at kinds – wood sleepyhead, tianshan baby-mouse, tamarisk chick-weed, tianshan wood field-vole, narrow skull field-vole, natural mole-rat, a gray marmot is determined. For the first time occurrence atits under influence of the raised natural radiating background at karyotype-tamarisk chick-weed, Kyrgyz field-vole and natural mole-rat is determined.
Ecology
cytogenesis
karyotype
a biodiversity
a chromosome
chromosomal polymorphism
a population
isolation
variability

Recently, one of the main directions in biology is the researches concerning conservation of biodiversity, species gene-bank and their bio-productivity. Biodiversity is studied at different levels of living systems. Currently, the study of biodiversity at the level of chromosomes attracts the researchers’ attention, as differentiation at the level of karyology in isolated micropopulations is not always accompanied by morphological variability.

The study of chromosomal variability has great importance for assessment of genetic potential of wild animals. Stability of cytogenetic indexes of animals can be used as a biological indicator of interaction with the environment and identification of the consequences of environmental impacts. Since mammals are adjusted to life in different environmental conditions, their biological diversity is also emphasized. Therefore studies of mammals’karyotypes determine originality of populations within species, and some peculiarities of individual variability at the initial phase of divergence being a valuable factual material of biodiversity of mammals’species. The consequences of isolation leave their mark on karyotypes, which isexpressed in chromosomal polymorphism within the species at the level of population. Solution of these issues has great value for the development of the theory and practical problems of environmental cytogenetics. Such studies assess the impact of the environment on heredity and determine the continuity of exposure to environment, provide an opportunity to determine the causes and level of variability, as well as the driving force of evolution.

The expeditionary gathering of animals carried out in the area of Kemin region and laboratory studiesserved as the object of the study. Specimens of mitotic chromosomes were prepared of bone marrow cells according to the standard method [8, 247].

Marmota baibacina Kastschenko. The karyotype of gray marmot of Kemin population has the following peculiarities. Diploid number of chromosome set is 2n = 38. Autosomes arms NFa = 70. 36 autosomes consist of 6 pairs of metacentric, 6 pairs of submetacentric, 5 pairs of subtelocentric and 1 pair of acrocentric chromosomes. X chromosome of metacentric, Y chromosome of submetacentric chromosome.While comparing the obtained data with other literature data, according to the number of diploid set the karyotype is the same all through the life, but according to the morphology it has spatial and biotopical chromosomal polymorphism. Meriones tamariscinus Pallas. According to our data, the karyotype of tamarisk gerbil of Kemin population consists of diploid number of chromosomes 2n = 40. Arms of autosomes NFa = 74. 38 autosomes consist of four groups. The first group is from gradually decreasing row of 7 pairs of metacentric chromosomes. The second group consists of 5 pairs of submetacentric chromosomes, the third group – of6pairs of subtelocentric chromosomes. The last group is composed of only 1 pairof acrocentric chromosomes. Sex chromosomes are composed of metacentric chromosomes different in size. During karyological studies, point chromosome sets – acentrics were found on some metaphase plates. Cells with such peculiarities comprise 1.47 % of the total number of analyzed sets. We associate this peculiarity of karyotype of tamarisk gerbil of Kemin populations with high natural radiation background of some local parts of areal of “living space”. During capture of tamarisk gerbils, in some parts of its areal from the natural background was from 72 µR/hrto 118 µR/hr. We assume that under the influence of highbackground the primary radiation phenomena happened at the level of chromosomes – the break ofchromonema and formation of painted fragments-acentrics. These acentrics being devoid of centromeres are incapable of correct orientation on the cleavage spindle, do not move to any pole, and these cells are eliminated. One of abiotic environmental factors – high natural radiation background – reduces the natural population growth of this species. Chromosomal polymorphism of some mammals, living in Kemin region

Ellobius talpinus Pallas. According to our data, the karyotype ofnorthern mole vole of Kemin population consists diploid set ofchromosomes 2n = 54, arms of autosomes are NFa = 54. Sex chromosomes are acrocentrics. When analyzing the karyogram common vole of populations Kemin it can can be noted that there are no sharp differences in the morphology of the chromosomes, metacentrics can be seen only in two points, the rest are acrocentric chromosomes. Acentric sets are found in metaphase plates of northern mole vole, like tamarisk gerbil. We associate this peculiarity with the conditions of the natural radiation background of this environment – “living space”. Due to the influence of this physical factor the same phenomenon as in the karyotype of tamarisk gerbil is observed.

Based on the conducted karyological researches of cytogenetics of some mammals of Kemin population the above-mentioned information can be summarized. The stability of karyotypes of eared hedgehog, common pipistrelle, wood mouse and grey hamster is seen in the number of chromosomes and morphology in all investigated “living spaces”. Variability of karyotypes offorest dormouse, Tien Shan birch mouse, tamarisk gerbil, narrow-skulled vole, northern mole vole, gray marmot is manifested in the form of spatial and biotopical chromosomal polymorphism (table).

Due to the increase of the natural radiation background in certain local areas acentrics are formed in the karyotypes of tamarisk gerbil, northern mole vole, Kyrgyz field vole.