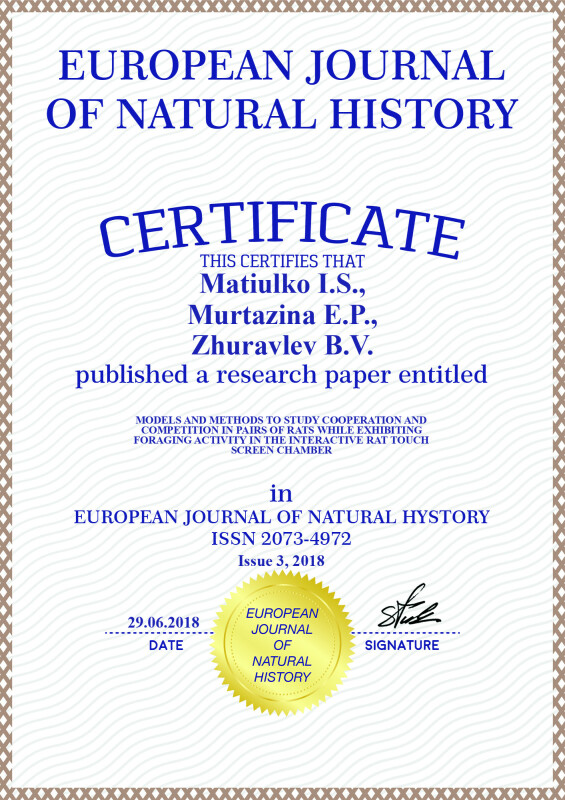 Article in PDF
1806 KB
Different methods and models of competitive and cooperative interactions are applied by researchers to study behavior of social animals in groups. In the present study we represent the model and methods to study and analyze the characteristic features of development of cooperative relations in pairs of rats while executing instrumental skill in the complex interactive environment. These methods are implemented using Rat Touch Screen Chamber complex (Lafayette Instrument, USA) controlled through the Lafayette Instrument’s versatile ABET II hardware and Whisker’s Control system and fitted with a touch monitor for conditioned signals representation and execution of operant behavior by rats for earning food or water rewards. Basing on this platform, we created the applications that allowed to display stimulus and to detect behavioral acts in order to simulate competitive and cooperative relations between two rats. In addition to that, algorithms for the obtained data analysis were developed and implemented.
competition
cooperation
touch screen
clinical signs
instrumental behavior
rats

Study of behavioral and neurophysiological mechanisms that underlie social relationships in animals is an issue of current importance in the physiology of higher nervous activity of mammals and birds, especially in the populations of social animals. One of the most complex forms of zoosocial behavior is cooperative interaction. Ethologists usually study animal cooperative behavior observing the processes of cooperative hunting [13, 9], cooperative brood care [18], and cooperation in defense against predators [5]; for example, cooperative rearing was found in Slender–tailed Meerkats [3]. Thus, the ability of animals within the population to cooperate may strengthen relations among the subjects and increase their chances of survival. To study cooperative behavior, researchers developed different instrumental models where animals in pairs have to cooperate in order to receive positive reinforcement. These models were applied to chimpanzees [1, 4, 12], elephants [17], dogs and wolves [14, 16], dolphins [3], and birds [11]. Since cooperation is a complex behavioral action, different neurophysiological and social parameters such as cognitive abilities of animals [15] and hierarchical status of a subject [10] contribute to the effectiveness of cooperation. Cooperation in rats and the role of ultrasound communication in this process were studied in the experiments of Gavrilov V.V. [6]. He used a model of operant foraging behavior in which rats in pairs learnt to press a lever simultaneously for a food reward after a set of individual learning sessions. The results of the experiment indicated different patterns of electrical activity in the brain when animals performed individual actions and when they exhibited cooperative behaviors. What is more, specific electric potentials in the brain arose during ultrasound communication. These data indicate that rats are capable of learning and performing cooperative actions and that ultrasound may mediate communication when rats exhibit cooperative behavior [7, 8].

Therefore, the aim of this study was to develop and to test a model of learning cooperative behavior in rats and to reveal the factors that may affect the learning process and its effectiveness.

Male Wistar rats (190 ± 10 g bode weight at the start of the study), two months of age, were used in the study. Animals were housed in the groups (5-6 per cage) under standard laboratory conditions of a 12:12-hour light/dark cycle with room temperature maintained between 20 °C and 22 °C. The animals had ad libitum access to food and water. All the procedures used in this study were performed in strict accordance with the Directive 2010/63/EU on the protection of animals used for scientific purposes and approved by the official Ethical Committee in Biomedical Research appointed by the P.K. Anokhin Research Institute of Normal Physiology.

The Rat Touch Screen Chamber (Lafayette Instrument, USA) was used in the study to design the experimental model of cooperation in rats. The chamber is equipped with modular panel with two troughs for food or/and water (pellet feeders) on one side and touch sensitive display (touch screen) for stimulus presentation (stimulus lights) on the other. This interactive environment provides an opportunity of cognitive assessment in animals by enabling the researchers to display a prearranged signal on the screen and, at the same time, by allowing the animals to execute operant feeding or drinking behavior in order to achieve food or/and water reward. The size of the chamber where animal can explore the territory (animal work space) is 30.5×26.0 ×20.0 cm with the monitor viewing area (effective display area) of 10.25” W × 7.9” H where the stimulus light is displayed.

Based on the ABET II hardware (Lafayette Instrument’s versatile ABET II and Whisker’s Control system) platform which controls the chamber, we developed and launched the software application that allowed to set the time for operations, run automated food and water supply, detect different types of actions performed by animals, such as touching the screen within the stimulus light area, opening the door of the food trough, and so on. Automated pellet and water dispensers outside the chamber provided water and food supply (water, 0.5 ml, and one food pellet, 45 mg). Food troughs were fixed on the side opposite to the monitor (thirty centimeters apart); a video camera (Logitech C270 WER HD 960-000635) for recording rats` behavior was placed above the cage.

For the sessions of learning cooperation by two rats for earning food reward, the chamber was divided into two equal parts by a metal mesh, so that each part of the space contained a food trough and a half of the sensory display. Metal mesh did not impede communication between two animals through the visual, tactile, olfactory, and sound afferentations.

Determination of the hierarchical status

Before and throughout the sessions of individual and cooperative learning we evaluated ranks (hierarchical statuses) of the animals in each group according to the dominancy based on the competition for access to water in the drinking vessel after 24 hours of water deprivation. After water deprivation, rats of one group were placed into the empty cage surrounded by the transparent plastic walls for 30 minutes. A drinking vessel with water was attached to the plastic wall and was fixed at some distance from the floor of the cage so that a rat had to climb on the platform (plastic cube, 10×10×10 cm) in order to reach the bottle. Since only one rat could fit the space of the platform, animals had to compete with each other, thereby demonstrating dominance over other animals in the group. The recording of animals` behavior was performed during each of the 30-minute sessions; then, total number of behavioral acts when a rat drank while standing on the platform and total duration of drinking acts for each animal were calculated. To determine the hierarchical status of animals, we compelled the sociometric matrices in which the ranks were calculated as the sum of the victories divided by the sum of the defeats for each rat. The victory/defeat ratio reflected the dominance of individual animal relative to the other animals of the same group.

Before learning cooperation, rats were trained individually to acquire an instrumental skill of earning food reward after applying a light touch to the conditioned signal (stimulus light) on the certain area of the touch screen. Prior to the individual learning session, rats were deprived of food for 24 hours. Light, sound, and other stimuli in the environment were minimized during the experiments. When a rat touched one of the stimulus lights on the screen (green cross on one side and blue circle on the other side), control software run automated dispensers for food supply (food pellet, 45 mg) to the opposite feeding window that was on the same side of the chamber as the stimulus light. When pellet dispenser was activated, short sound from the side of the automated dispenser signified pellet entry into a food trough; thus, a rat could recognize a moment when a food pellet was delivered. Duration of the first learning session was 1 hour, of the second session – 40 minutes, of the third one – 30 minutes, and then 20 minutes for each of the remaining sessions.

ABET II hardware system used in the present study contained a set of programs for planning, collection, and analysis of the experimental data. There programs allowed to provide chronological sequence of output signals (displaying of the stimulus lights on the screen, running automated food and water supply) and input signals, such as quantitative measure of behavioral acts (touching the image of the stimulus, feeding and drinking, opening and closing the doors of the food trough). For the sessions of individual training we performed quantitative measure of the time parameters of behavioral acts and calculated latent periods between them. Cognitive abilities of the animals were evaluated according to the learning rate throughout the sessions and the total number of effective eating and drinking patterns during each session.

After the sessions of individual training, rats of one group were placed in pairs into two separate parts of the experimental Rat Touch Screen Chamber for acquisition of the cooperation skill for earning food reward. The chamber was the same as one used in the experiment on individual learning and was modified and adjusted according to the conditions required for cooperation: metal mesh divided the chamber into two parts; each part contained a half of the screen and one feeder. Animals were paired randomly; once formed, pairs remained unchanged throughout the experiment. Since cooperation implies behavioral synchronization in touching stimulus light and consequent earning food reward by two rats, two types of events were detected during the session: 1) effective cooperation achieved by the coordinate touching the stimulus light on each part of the screen by two rats within the period of 5 seconds (latent period) followed by delivering two food pellets; 2) no cooperation detected when a second rat touched the image of the conditioned signal with delay (incoordinate behavior), i.e. with the latent period of more than 5 seconds (“delay”) or when a second rat did not make an operant response by touching the stimulus light within the 10-second period after the first rat (“no response”).

For each experimental trial we recorded temporal dynamic of the events: time of the stimulus light displaying, time when a rat touched the conditioned signal and looked inside the food trough, and time when the food pellets were delivered. Characteristics of the behavioral patterns were calculated and analyzed for each pair of animals and included total numbers of effective coordinated acts of cooperation, of incoordinate acts, and of the failures of cooperation. The following parameters were calculated individually for each rat: number (N1) and latent periods (LP1) of events when a rat touched the stimulus light first; number of events when a rat touched the stimulus light after first rat (N2, “cooperation”) with the latent period of up to 5 seconds (LP2 ≤ 5 s, “delayed response”); number of touches with the latent period of more than 5 seconds (LP3 > 5 s); the number of events when a second rat did not touch the conditioned signal after the first rat`s touch (N4, “no response”).

Analysis of the proportions between different behavioral patterns for animals in each experimental pair during the trials of cooperation allowed to identify leaders and followers within a pair and to reflect the general effectiveness of cooperation among the animals of one group. In most cases, leadership (dominance) detected when an animal touched the stimulus light first, was characteristic for a rat with the higher rank determined by the victory/defeat ratios in the competitions for access to water. Nevertheless, the effectiveness of cooperation also depended on the response of the second animal: cooperation was effective when a second animal recognized the action of the first one and responded by touching the stimulus light within 5 seconds. The average latent period of the coordinate response (touching the image of the conditioned signal after the first animal) was 3,7 ± 0,4 seconds.

The results of the experiment on implementation of the model of cooperation in rats shown that this model allows to effectively and precisely determine rats` individual abilities, including cognitive abilities, required for cooperation with other animals from the group and, together with additional analysis and observations, to reveal the factors that may affect abilities for cooperation. vacuolization of the affected cells, and then the destruction of the monolayer [25].