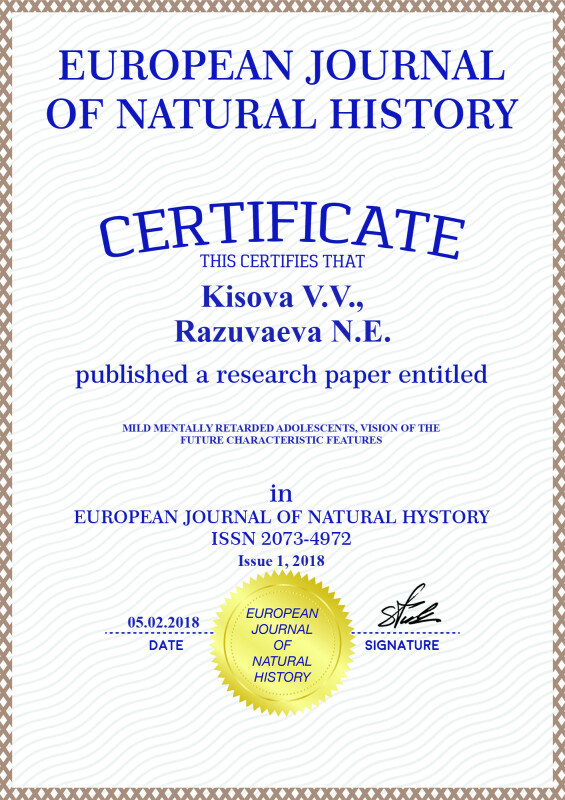 Adolescence is one of the crucial periods in the formation of personality, in which the formation of a worldview and conscious vision of the future life is taking place. The various social and economic changes occured in modern society, which teenagers have to face, affect the features of the formation of their visions about themselves, their future. The research of personality traits of adolescents, especially their visions of the future is devoted to the work of both native and foreign researchers (K.A. Abulkhanova-Slavskaya [1], B.G. Ananiev [3-5], L.I. Bozhovich [6], E. Golovakha [8, 9], I.S. Kon [13-14], K. Levin [16], N.A. Loginova [17] and others).

To determine the category of the visions of the future the following concepts are used in some scientific works: “time orientation” (J. Nutten), “time perspective” (K.A. Abulkhanova-Slavskaya, K. Levin), the subjective picture of a person’s life way (B.G. Ananiev), etc.

According to K. Levin, the concept of “time perspective” reflects a holistic view of a person’s life: past, present and future, and he understood the life perspective as a kind of self-projection of the person into the future, reflecting the entire system of his motives and at the same time moving beyond the existing motivational hierarchy. The “time perspective” gradually expands and becomes more complex with growing up personality, reflecting the unique experience that a person gets during his life way [11, 16].

B.G. Ananiev first used the concept of the subjective picture of a person’s life way. Later it was interpreted as a mental image, which reflects the socially determined spatial-time characteristics of the life way (past, present and future), its stages, events and their interrelations [3-5].

The time perspective changes during the person’s life way and has its own specifics in each age period. Adolescence is of a particular interest, which is the age of psychological readiness for the formation of a person’s conscious attitude to his future based on increasing independence in decision-making, professional and personal self-determination. (L.I. Bozhovich [6], I.S. Kon [13, 14], N.A. Loginova) [17].

The second one – according to the concept of J.V. Borisova, the adolescents, vision of the future is presented as “a multidimensional psychological composition, consisting of cognitive, emotional and positional components. The cognitive component is a specific mental construction that develops from the concepts used by the subjects in describing the subjective future. The emotional component includes the evaluation of the potential future (positive, negative or indefinite) and an affective attitude to the future that characterizes the significance of the concept of “my future” for the person. The position component reflects the way of comparing oneself with the future, declared by adolescents, internality or externality in the future” [7, p. 24].

It should be noted that the vision of the future in adolescents is a complex integrated composition including value orientations and the first life plans, both planned and expected events, assimilated stereotypes of social behavior, elements of reflection and self-esteem, attitudes and emotional attitudes to the future.

It is interesting to note that different researchers consider such visions of the future in adolescents with mild mental retardation as the visions of the family future, professional self-determination, features of self-esteem and level of claims (A.K. Akimenko [2], J.V. Borisova, L.P. Grigorieva, E.V. Muravieva [19], E.A. Stebliak, etc.).

It is important to note that all three components making up the vision of the future is characterized in adolescents with mental retardation (J.V. Borisova, [7]): cognitive, emotional, and positional. The content of each component in different degrees is determined by the form disorders of mental development, socio-psychological conditions of education and personal characteristics of adolescents. Mild mentally retarded adolescents, visions of the future are immature, mosaic and not associated in meaning. Consider the content of each component.

The cognitive component of the visions of the future in adolescents with mental retardation is characterized by simplicity, lack of the vision of oneself in the future, their profession and family, characterizes the discrepancy between the actual abilities and levels of claims. Adolescents with mild mental retardation have a very narrow range of preferred professions, their choice is often formal (V.V. Romashuk, E.V. Svistunova, E.V. Muravieva). They often do not have the necessary information about the selected professions, but they want to earn a good salary [21].

In her research E.V. Muravieva identifies that the choice of profession mainly depends on the orientation of the school labour training (a mason, a seamstress, and a turner), the example of relatives and friends (a salesman, a driver). Senior pupils with mental retardation prefer group activities and want to work with relatives or friends [19].

Mild mentally retarded adolescents, visions of the family future are not enough formed. It is difficult to predict their future relations because of a variety of adverse social and material family foundations, and the deficit of the own social position of the learner (N.V. Moskalenko [18], V.V. Romashuk) [21].

The positional component of the future in adolescents with mental retardation has a high level of lack of the vision of oneself in the future, the mismatch and a clear external orientation. Adolescents often focus on assistance in the future.

We can observe an overstated self-esteem, and a lower “fragile” self-esteem (depending on external evaluation).

The research of E.L. Indenbaum confirm that self-esteem and level of claims in adolescents with mild mental retardation overstated. The author considers that the relationship between adolescents and their parents significantly affect the visions of their future [12].

So, it is possible to say that the mild mentally retarded adolescents, vision of the future consists of the following components: cognitive (the visions of themselves, future professions, future family), position (focusing only on themselves or on assistance) and emotional component (assessment of own future, self-esteem). Senior pupils with mental retardation have low levels of self-determination, self-selection of goals and assessment of their abilities, they often ignore their own disadvantages, failures for the high self-esteem. The self-esteem of the majority of mentally retarded adolescents is high, and the low level of claims leads to the fact that they have formed a protective strategy for avoiding failures.

These features of the vision of the future in adolescents with mental retardation must be considered in teaching and correctional work with them in schools and professional institutions.