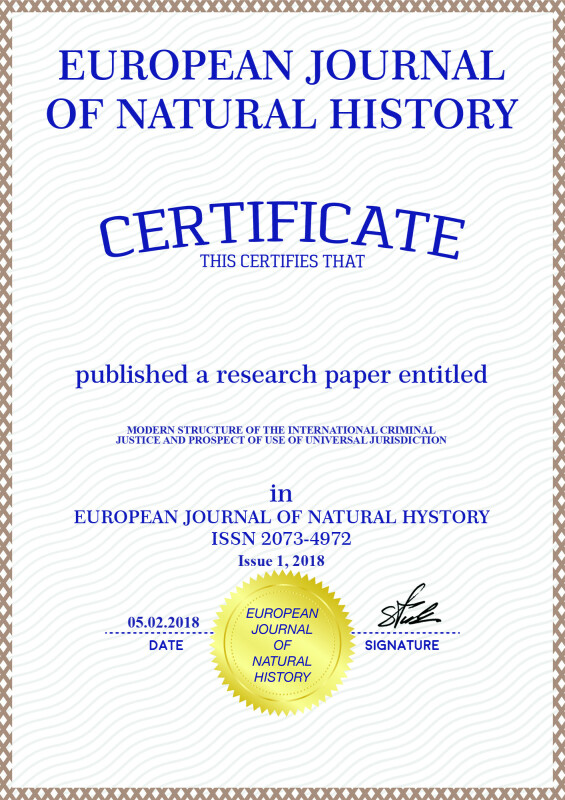 “Jurisdiction (from Latin “jurisdiction” – legal proceedings, from “jus” – the right + “dico” – to say) – established by the law or other regulatory legal act of power of public authorities and officials on permission of any legal questions”.

Antonio Kassez pays our attention that “so far human rights of bonum commune humanitatis steel, a kernel of values of great value for all mankind. Therefore logically and consistently to give to vessels of all states an opportunity and also to impose on them a duty to pursue on court, to lead to court and to punish people who are suspected of intolerant violation of such values”.

There are following forms of the international jurisdiction:

1. Nuremberg and Tokyo tribunals. They were created by the countries of the anti-Hitler coalition on the basis of the relevant international agreements in between. These tribunals often name “vessels winners”, and it is necessary to recognize that this determination is fair.

3. The hybrid or “internationalized” courts which were created not by the decision of the Security Council, but agreements between the United Nations and the governments of those countries concerning the crimes committed in the territory of which these judicial authorities were allocated with jurisdiction.

Three above-named forms of the international jurisdiction unite the common important features. First, these courts have been created by the principle of ad hoc, i.e. as the special temporary tool for consideration of the crimes committed during a certain period of time and in a certain geographical territory. Secondly, these courts are retroactive, i.e. are allocated with competence to consider the crimes committed before their establishment.

4. International Criminal Court (Hague, Netherlands). “His essential differences from the judicial authorities mentioned above is that he is permanent, its personal and territorial jurisdiction isn’t connected with concrete armed conflict or an event, and he isn’t retroactive, i.e. has the right to consider only the crimes committed after the introduction of his Statute in validity (since July 1, 2002)”.

It should be noted that universal jurisdiction – rather new and promptly developing area is right.

William Shabas defines universal jurisdiction as “competence of national court to judge the person suspected of serious international crime – like genocide, war crimes, crimes against humanity or torture – even if neither the suspect, nor the victim are citizens of that country where the court is located, and crime took place out of this country”.

“Practice of the states establishes this norm as norm of common law concerning the war crimes committed as during the international and not international conflicts”.

“So far about 120 states have adopted the laws giving to them courts the right to carry out this or that form of universal jurisdiction”.

“Nevertheless, universal jurisdiction, even as it stands – the unique mechanism containing the big and still not up to the end conscious potential of fight against impunity irrespective of frontiers. It is necessary to agree that “investigation and prosecution can be successful and without cooperation of the states in the territory, of which a crime is committed, in cases where private applicants well identify witnesses and sources of the proof”.