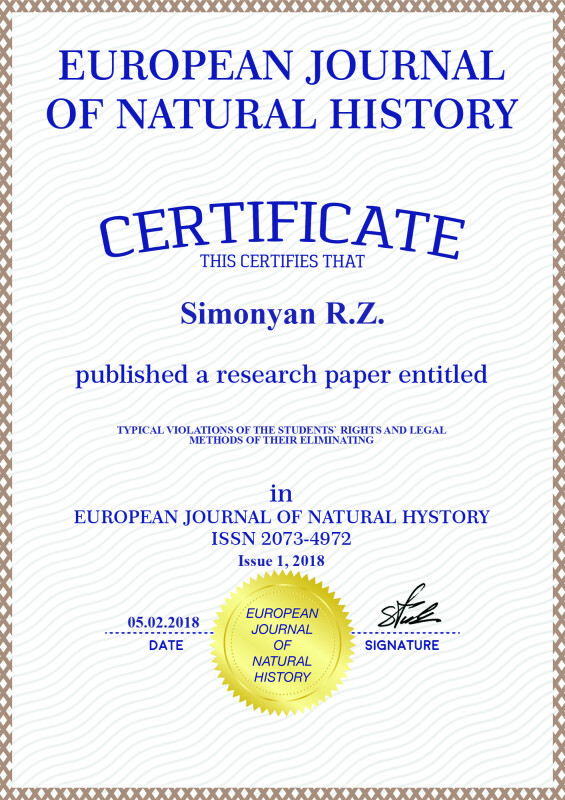 Article in PDF
1738 KB
Article 43 of the Constitution of the Russian Federation states that “everyone has the right to education”. And herewith it is guaranteed access to free preschool, basic general and secondary vocational education in state or municipal educational establishments and at enterprises. But the Constitution says about the right to free higher education, which can be obtained on a competitive basis. This right is implemented through state or municipal educational institutions and enterprises. The state also guarantees the right to higher education of private institutions through the “establishment of Federal state educational standards, support of various forms of education and self-education”. As you know, if there is a law, there will be surely their violations. In modern Russia the rights of students are violated, first of all, “the heads of educational institutions and the bodies exercising administration in the sphere of education of constituent entities of the Russian Federation” – it follows from the analytical information on work results with citizens` references in 2012 provided by the Federal Education and Science Supervision Agency. In our opinion, violations by teaching staff are also not uncommon. Also possible violations of the students` rights by authorities at the Federal level, however, these bodies usually are mediated and their violations are less visible from the direct owners.
higher education
violation of students` rights
educational services
federal state educational standards
1. Zelenova I.V., Simonyan R.Z. Features of the organization (integrated) inclusive education of persons with disabilities and children with disabilities in educational organizations // University Science: A Look into the Future. Materials of the international scientific and practical conference dedicated to the 81-th anniversary of the Kursk State Medical University and the 50th anniversary of the Faculty of Pharmacy. In 3 volumes. 2016. – pp. 133-136.
2. The Constitution of the Russian Federation of December 25, 1993, as amended on December 30, 2008 // Rossiyskaya Gazeta – Federal Issue No. 4831 (0).
3. Pashina I.V., Simonyan R.Z. The right of every person to health care and medical care / / Modern problems of science and education. – 2015. – No. 4. – p.414.
4. The Order of the Federal Service for Supervision in Education and Science of December 11, 2014 № 1900 Moscow “On approval of the Instruction on the procedure for considering applications from citizens in the Federal Service for Supervision in Education and Science” // Rossiyskaya Gazeta – Federal issue No. 6648 (77).
5. Federal Law of the Russian Federation of December 29, 2012 No. 273-FZ “On Education in the Russian Federation” // Rossiyskaya Gazeta – Federal issue. No. 5976. 31.12.2012.
6. Federal Law No. 59-FZ of May 2, 2006 “On the Procedure for Considering Applications of Citizens of the Russian Federation” // Rossiyskaya Gazeta – Federal Issue No. 4061 (0).
7. Federal Law of February 7, 1992 No. 2300-I “On the Protection of Consumer Rights” Rossiyskaya Gazeta – Federal issue of December 1, 2008.

One of the violations of students` rights in the work sphere is the attraction of students to the so-called “voluntary public works”. In accordance with the Article 37 of the Constitution of the Russian Federation “Labor is free. Everyone has the right to freely dispose of his abilities to work, to choose the kind of activity and profession”. Paragraph 2 of this article says that forced labor is prohibited, therefore attracting students to “voluntarily forced labor” is a violation of their constitutional right to free labor. [2]

The administration of an educational institution can mask this violation. The student must comply with the curriculum developed and adopted by the university in the manner prescribed by the relevant legal acts. To do this, such a duty is foreseen in the educational plan of the educational organization and “is justified by the need to form a civic position, ability to work and life” [3].

If the administration of the university did not bring the relevant rules into the local normative acts, then one can safely resort to the judicial procedure for the rights protection, referring to Art. 37 of the Constitution of the Russian Federation and art. 2 of the Labor Code. If the administration has adopted regulatory measures, then it is necessary first to challenge the relevant local norms – primarily through the mechanisms of student self-government. If a constructive dialogue with the administration fails, it will be effective to organize a collective complaint to the prosecutor’s office. In accordance with Article 45 of the Civil Procedure Code of the Russian Federation, “the Prosecutor has the right to apply to the court in defense of the rights, freedoms and legitimate interests of citizens, an indefinite circle of persons or the interests of the Russian Federation”. Thus, in court there will be a confrontation not of officials and citizens, but of officials and the prosecutor’s office, or a commercial (or non-profit) organization and the prosecutor’s office, which will certainly increase the possibility of case winning.

Providing a non-quality education is a fairly special case in educational institutions of any organizational and legal forms [1]. This problem is relevant not only for Russia. So in Poland, the practice of concluding contracts guaranteeing the quality of training has become widespread. A sample document was prepared jointly by representatives of the student parliament and the Foundation of Polish rectors. In such contracts, it should be written about the tuition fees, the establishment of a number of lectures and seminars offered by the university and the conditions for practical classes and the receipt of a diploma.

In Russia, a “contract for the provision of paid educational services” has long since become a practice. This contract can be qualified as a contract of accession, i.e. the contract terms of which have already been developed and are not subject to change. In this regard, one must bear in mind: firstly, the administration of an educational institution in such a contract cannot in advance specify the limitation of the size of the university’s responsibility; this conclusion can be made on the basis of paragraph 2 Art. 400 Civil Code of the Russian Federation. Secondly, the party joined to the contract has the right to demand the termination or amendment of the contract, if the accession contract, although does not contradict the law and other legal acts, but deprives this party of the rights usually provided under such contracts, excludes or limits the responsibility of the other party for violation obligations or contains other conditions that are clearly burdensome for the party, which, on the basis of its reasonably understood interests, it would not accept, if it has the opportunity to participate in the determination of the terms of the contract (par. 2, Article 428 of the Civil Code of the Russian Federation).

Responsibility in addition to the contract itself is determined by the provisions of the Civil Code of the Russian Federation and the Law of the Russian Federation “On Protection of Consumer Rights”. So, if there are deficiencies in the services provided, including providing them in an incomplete volume assumed for by educational programs and curricula, the consumer (the person who enters into the contract, as a rule, the parent of the applicant) has the right to demand at his choice:

– A corresponding reduction in the cost of the educational services provided

– Reimbursement of expenses incurred by him for the elimination of deficiencies in the provision of educational services on his own or third parties.

The consumer has the right to demand the drawing up of an estimate referring to Part 1 of Art. 33 of the RF Law “On Protection of Consumer Rights” [7].

If the right of students to receive quality education is violated, then in addition to the trial, a complaint to the (Federal Education and Science Supervision Agency is possible. The reception of complaints is conducted in accordance with the Federal Law “On the Procedure for Consideration of Appeals of Citizens of the Russian Federation” and the Order of the Federal Service for Supervision of Inspection of the Russian Federation “On Approval of the Instruction on the Procedure for Considering Citizens’ Appeals in the Federal Service for Supervision in Education and Science”. So the order established that a written request is subject to mandatory registration within three days from the date of receipt. It is given a registration number, which is formed from two initial letters of the name of the author of the appeal and the serial number of the appeal in the current year. The analytical information on handling citizens` appeals provided by Federal Education and Science Supervision Agency in 2012 indicates that in 2012 the tendency of recent years continued, according to which the number of citizens` appeals to the Federal Education and Science Supervision Agency increases every year. It is possible to send a complaint via e-mail. Electronic letter is transferred into paper form, i.e. is printed, and further work with it is conducted as with a written appeal. The registration number and the date of registration are automatically inserted by the electronic document management system. If the educational institution is non-governmental, then a complaint is possible to made to the Association of non-state higher education institutions of Russia [4,6].

There are often cases of students’ rights violation at the exam. In accordance with the Federal Law “On Education in the Russian Federation” during the exam, students can use the curriculum, as well as with the permission of the examiner reference literature and other benefits. However, teachers quite often deny students the realization of this right, referring to the possibility of writing off both with materials previously affixed to curricula or modification of programs in order to add additional information to them, and use the official texts of the curricula themselves. The cases of attachment and modification of programs can be stopped with the help of appropriate control measures. The reference to the prohibition of using the official texts of curricula themselves makes the statement of the examiner even more unlawful, since it contradicts the federal law.

Students of state educational institutions often face violations of their housing rights. Now the average scholarship for university students is 1500 rubles. So, the minimum state academic scholarship in our country is 1,340 rubles for higher education (bachelor’s programs, specialty programs, master’s programs), the maximum is 6 thousand rubles. The last scholarship can be received by university students, students without satisfied marks. At the same hostel, for example, in the Kursk State Medical University costs the student 700-800 rubles per month. The procedure for determining the amount of payment for the use of a dwelling is established by the educational organization independently. The utility fee includes fees for hot water, cold water, sanitation, electricity, gas supply (including supply of domestic gas in cylinders), heating (heat supply, including the supply of solid fuel is having stove heating).

Housing conditions also often leave much to be desired. And students at the legal level are limited in the ability to independently improve their living conditions. In accordance with an approximate regulations on the student hostel of the federal state educational institution of higher and secondary vocational education of the Russian Federation, the use of personal energy-consuming power-consuming appliances and equipment in living rooms is allowed with the permission of the hostel administration in accordance with the procedure established by the educational institution for an additional payment for consumed electricity. The fee is borne by those living in the rooms in which these appliances and equipment are used.

This article described only a small part of violations of students` rights. Analysis of the above violations allows us to conclude that they are entrenched stereotypes of behavior and even teachers of law faculties often take them for granted. Increasing the level of sense of justice should start with the administration of educational institutions and faculty. If we talk about legal methods to combat these violations, then, in our opinion, it is necessary to combine civil-law methods with publicly legal ones.