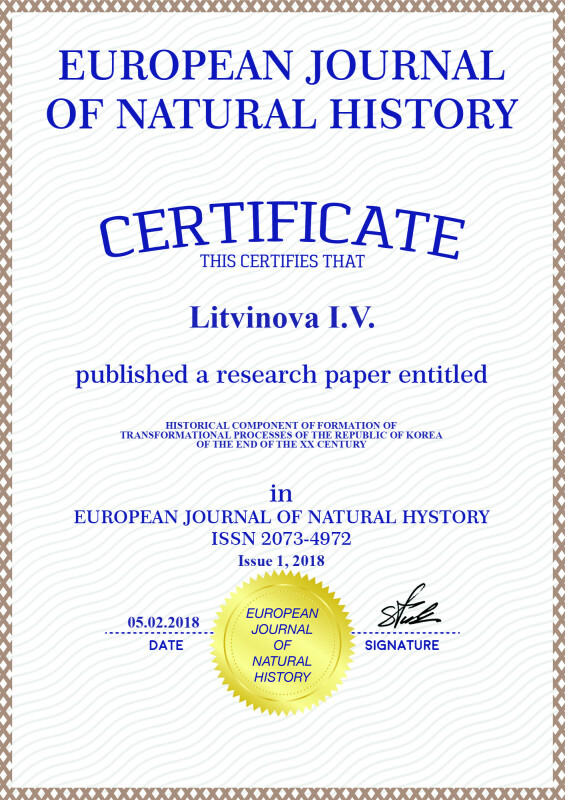 Litvinova I.V. 1
1 The senior lecture of department of Management and economy of Vladivostok State University of Economics and Service, branch

Article in PDF
1795 KB
In this article features of formation and development of transformational processes of the Republic of Korea of the end of the XX century, namely the concerning development of institute of the president and the government are considered. Explanation for it only one: the South Korean political regime of the end of the 80th years of the XX century was two-faced: I carried peculiar only to him line and pro-American character and Korean-patriotic. The priority of standards of moral right, over the legal procedure is characteristic of the Republic of Korea, i.e. the end result, but not dragged out process is important for South Korean society. The character of the Republic of Korea can be defined how character peculiar to “patrimonial society” which in total presents the alloy of national and historical unity, the general for all Koreans. Listed above lines, specific to the Republic of Korea, are also considered in article below.
historical component
republic
transformational processes

In the conditions of deficiency of resources, in situations of crisis, accidents, radical transformations come to the forefront values of survival and there is a request for the centralized power realizing strict social control.

And with emergence and expansion of a layer of owners inevitably there is a request for the legal culture providing their rights, a possibility of free self-realization. Historical experience of modernization of Spain, Germany, Japan, South Korea, Chile demonstrates that in process of the successful course of modernization in the country are formed and democratic institutes begin to work, replacing with themselves rigid dirigisme.

The purpose of this article – to define the main historical components making transformational processes of the Republic of Korea at the end of the XX century.

Tasks of this article:

– to define historical factors of influence on transformational processes;

– to define historical prerequisites of development of institutes of the power.

The main method of a research used when writing this article historical, retrospective.

The aspect of functioning of political legal mechanisms in the Republic of Korea is as follows.

The republic, South Korea has been called on August 15, 1948, since this period the state existed at six the constitution (1948,1960, 1962, 1972, 1980, 1988). Since 1948 functions of executive power headed by the president who was elected for 4-year term rather accurately registered in each of Constitutions. The parliamentary system to which executive authorities were accountable was in parallel installed [3].

Since 1972 functions of the president were expanded and about today active development of legal institutes and mechanisms of interaction between the president and the government is carried out.

Today the Republic of Korea lives in a condition of reforms, the provision on which has been published in January, 2013. Was at the head of the angle of this reform as it isn’t strange, reduction of the ministries. Their quantity was supposed to be reduced to 13 ministries, with initial 18 at what two ministers, without so-called “portfolios” have to be a quantitative part.

The South Korean political system is extremely not stable. The national Assembly performs functions on adoption of the state budget, laws, approves the international agreements, can approve or not approve candidates to the presidency.

In the theory the National Assembly has the right to declare war, but this right is more symbolical, only the president can make such real decision. Work of National Assembly lasts all the year round, standardly the session takes place 100 days if there is the state need, and then also additional sessions can be convened [5].

It is advisable to consider formation of modern South Korean transformational processes in a historical retrospective and in the context of formation of institute of the president.

It is necessary to pay attention that process of emergence and further formation of institutes of democracy was not only difficult, but also contradictory. So formation of I and IV Republics took place actually in authoritative realities, and not about what democracy of the speech to be and couldn’t. The shy prerequisite of transition from authoritative to democratic regime has arisen only in the late eighties. 20th century, it was that period of time when South Korea “has ripened” for carrying out comprehensive reforms and administrative, and constitutional sense.

The president Roh Tae Woe who has taken the responsibility for forestalling in life of new constitutional reforms which at the correct adaptation and understanding would provide in a consequence the presidential power and a possibility of transfer of the authorized presidential beginnings from one president to another became the founder of this phenomenon [4].

Thus, in a basis the Constitution of the VI Republic not only features of the principle of division of the authorities, but also the basic ideas of civil society and the constitutional state have been put.

The following stage in development of society of the Republic of Korea was the government of the president Kim Tae June who has strengthened bases of parliamentary democracy and has kept the status of the president capable to make own political decisions which wouldn’t contradict not the constitutional bases, democratic postulates.

Further there were actions directed to fight against the residual phenomena of authoritarianism by political transformations in the state system of the Republic of Korea, the president of the VI Republic, But Mu Hen seeing that all reforms have to be based on the constitution became this reformer. The tradition of reforming and advance of regional interests has remained up to 2007 – time period when But Mu Hen has retired. But against the background of the appeared democratic – the corruption problem has increased.

Relying on experience of the colleagues, using in the pre-election race for belief of South Korean citizens a spirit of administration on democratic formations in 2007 at presidential elections Lee Myung-bak. But as it isn’t strange, the administration of this president has headed for lack of attention to the so-called “Korean regionalism” [8].

The so-called “regional hostility” (“chiban kamchzhon”) has appeared in Korea long before emergence of institute of presidency. Despite ethnic uniformity of the population of the Korean peninsula, at the beginning of our era in his territory three state educations – Koguryo, Pekche and Cilla settled down.

In the conditions of authoritarian regime the phenomenon of “regional hostility” minimum influenced political process. The ruling party enjoyed the greatest popularity on the periphery, and opposition forces found the considerable support in Seoul and the capital province Kyongi. During transition from authoritarianism to democracy the factor of “regional hostility” began to exert clearly impact on process and totals of choices, both parliamentary, and presidential. All three candidates for president were natives of three different regions in who got the maximum support.

Still more this tendency was shown at parliamentary elections of 1992: the ruling “Democratic liberal party” and according to places in parliament (28 of 32 possible places) received the largest number of votes in provinces Northern and Southern Kyonsan (the party leader Kim Yonsam of that time is the native of the province Northern Kyonsan). “Democratic party” Kim Dechzhuna (the native of the province the Southern Cholla) was the absolute leader in provinces Northern and Southern Cholla (95 % of voices, 31 places), however in other provinces managed to carry out to parliament only on one candidate [5].

Actually in the Republic of Korea there was a party system on a formula “2+”. For more than ten years of one of two largest political forces the conservative “Party of the great country” is. The name of other largest political party of the liberal sense several times changed, however, despite these changes and also changes of leaders, its ideological basis and the political program remained invariable.

These two parties fight for the majority of seats in Parliament; their representatives are the main applicants for presidential post during the presidential elections. The main program differences between these two largest forces lie in the field of foreign policy: conservatives traditionally support close cooperation with the United States both in economic, and in the military-political sphere, they are also distinguished by very hard line in relation to North Korean regime.

The present, but formally existing Constitution of the Republic of Korea has been adopted on July 17, 1948, today it is day of a national holiday. It is necessary to tell that South Korean society has decided to borrow the American experience: not to adopt the Constitution anew not to change a political component, and only make amendments to the existing Constitution [4].

The modern South Korean political system and the Constitution contain in the existence a little more than 30 years, rather strong influence from the American system of public administration is by the way, seen on South Korean, the last though reminds on the structure “boss” well functional loading carries essential differences.

Actually, all political life is in South Korea under control at the president. In the so-called “Blue house” (the residence in the center of Seoul) fatal decisions for the whole country are also made.

Since the end of the 2000th of year in the Republic of Korea we see that the called split on two confrontational camps. These are the supporters of the left opposition calling themselves progressive who can be negative enough to pro-American tendencies in the Republic of Korea, even concerning economically developed chebol concerns, but support the western model of democracy. So-called “left” feel sharp hostility to military dictatorship, but take a liking for military dictatorship Kims in the neighboring Northern Korea.

Of course, mass layers of the South Korean population only have begun to join step by step policy, but large-scale process of integration of interests, both businessmen, and representatives of the middle class has already begun. Of course, so-called formation and self-determination of the main political forces in the Republic of Korea has very short history and for today it is rather difficult to speak about formation of pro-political groups which would be capable to provoke formation of multi-party system.

Experiment of South Korea is shown by a set of conditions under which the political authoritarianism can be economically productive. First, the ruling clique has to put the interests of social development above aspiration to personal enrichment.

This in itself the rarity is also reached only through the corresponding education and education. Success of authoritative modernization is impossible without group of the formed and disciplined state bureaucracy capable to formulate the economic program.