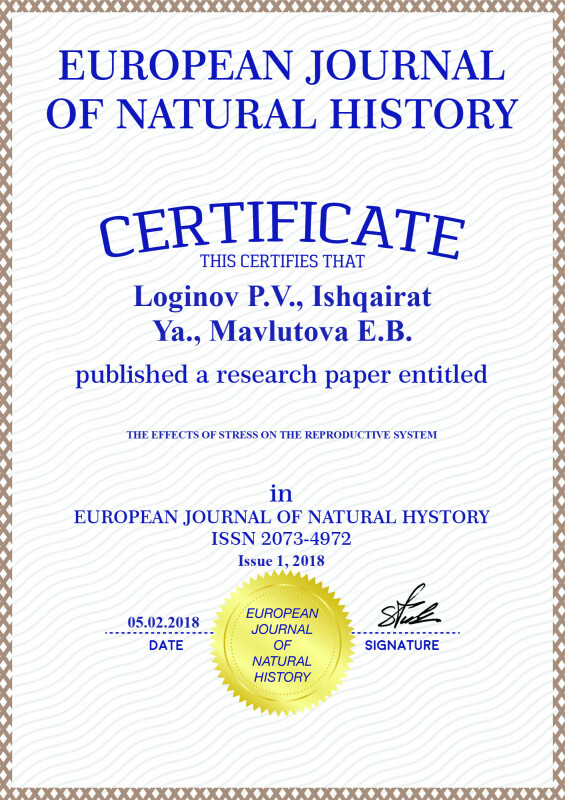 THE EFFECTS OF STRESS ON THE REPRODUCTIVE SYSTEM

The problem of stress is too often avoided. Oxidative stress is an imbalance between the systemic manifestation of reactive oxygen species (ROS) and a biological system’s ability to detoxify readily the reactive intermediates or to repair the resulting damage. Disturbances in the normal redox state of cells can cause toxic effects through the production of peroxides and free radicals that damage all components of the cell, including proteins, lipids, and DNA. Further, some ROS act as cellular messengers in redox signaling. Thus, oxidative stress can cause disruptions in normal mechanisms of cellular signaling. In humans, oxidative stress is thought to be involved in the development of many diseases or may exacerbate their symptoms. Oxidative stress also provokes infertility. However, ROS can be beneficial, as they are used by the immune system as a way to attack and kill pathogens [1].

Stress is one of nature’s contraceptives and can have a dramatic effect on healthy reproduction. The major stress hormone, cortisol, is derived from progesterone, the primary source of the reproductive hormones testosterone and estrogen. Cortisol is like a long-term form of adrenaline, produced in the adrenal gland when the body is under pressure. Most active people suffer for some form of adrenal fatigue due to pushing their limits for too long. Men and women need testosterone to produce the eggs and sperm. Testosterone converts to estrogen in the follicle; this process is called aromatization. Testosterone has to be present for the full 72-day spermatogenesis process. When stress is stealing all the progesterone, neither estrogen nor testosterone can be in adequate supply to support healthy reproductive tissue growth [2].

We have studied the effects of microwave radiation on male reproductive system. In fact, microwave radiation as a kind of a comparatively “soft” stress may also cause damage to the male reproductive organs. Specifically, scientists have demonstrated that exposure to microwave radiation may result in partial or permanent sterility. In addition, some scientific evidence suggests similar effects associated with microwave exposure and female reproductive problems. Making the model of reproductive system suppression has allowed us to indicate the specific markers of stress within the hypothalamic-pituitary-testicular complex. It is no doubt that the universal marker of oxidative stress at all units of reproductive system is the malonic dialdehyde (MDA) and intermediate products of lipid peroxidation. In practice, the MDA is good for indicating the oxidative stress development in hypothalamic tissue where considerable changes in lipid peroxidation were observed. This is explained by the fact that hypothalamic tissue is rich in the main substrate of lipid peroxidation – lipids.