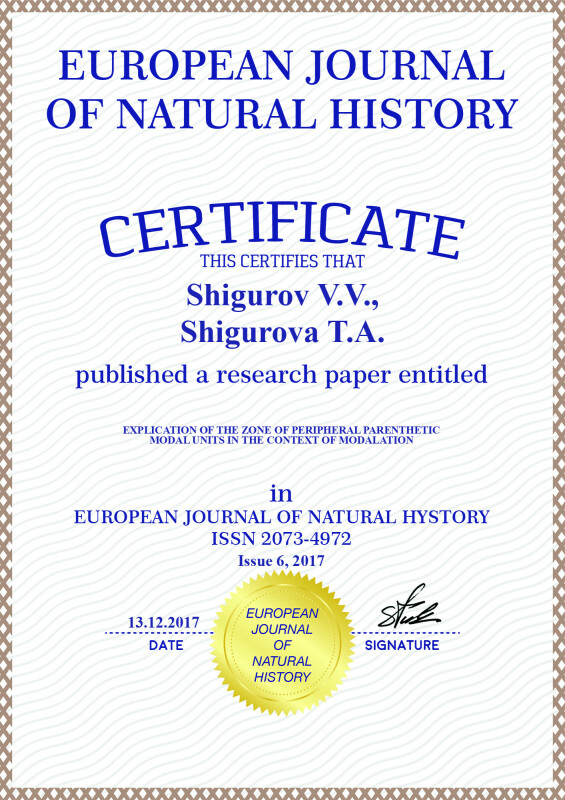 Gradual character of modalation of short adjectives in the Russian language generates structures that in modern language present different stages of this type of inter-part-of-speech transposition. Graphically the process and the result of modalation can be presented in the form of links on the scale of transitivity. As a premise it is admitted that the degree of modalation of adjectival and adverbial lexemes is different, moreover, there can be movement of the same word form in various speech environment along the transitivity scale from point “A” (stage (Short adj./ Adverb) [midpoint of short adj, and/ or adverb]) to point “B” (stage Modal word [midpoint of parenthetic modal words] through a series of intermediate stages: “Ab” (stage Short adj. modal [periphery of short adjective] > “ab” (stage short adj. modal [zone of hybrid structures] > “aB” (stage short adj./adverb: Modal [periphery of parenthetic modal words]) (on types, attributes, degrees of transposition of linguistic units in the system of parts of speech, see [1-4].

Of interest is the study of transient phenomena, manifesting next-to-last, functional stage (“aB”) of modalation of linguistic units.

In relation to functional modalates such as it is certain/no doubt, it seems/looks like, by chance/accidentally, that reveal a zone of the periphery on the scale of modalation, it is difficult to talk about one starting (initial) point of inter-categorial transposition. The fact is that in synchrony they, as it is known, can be correlated simultaneously with two classes of words – adjectives in the short form (in the predicate function) and adverbs homonymous to them. This circumstance makes us distinguish two transition zones with different initial and one final point of modalation. Compare their explication (expression) in the context of the use of the adjective (1) and adverb (2), on the one hand, and correlative with them introductory modal word (3) on the other:

(1) Congruence (coincidence) of numbers on the documents is accidental;

(2) Numbers on the documents coincided by chance (accidentally);

There is reason to assume that from a diachronic point of view, the starting point for adverbs such as by chance/much alike and modal words (accidentally, it seems/probably) are short adjectives (accidentally, alike), which could be transformed into parenthetic modal words at once (4) or through an intermediate stage of an adverb (5):

(4) This seems (feels) like truth (short adjective) --> This is, like, truth as it is (parenthetic modal word);

(5) His superiority (dominance) was undoubted (short adjective) --> a) At the last stage he won undoubtedly (adverb); b) they were people who knew each other, no doubt, a very long time (parenthetic modal word).

The degree of modalation of adjectival and adverbial word forms in various speech environment is different. Their limitation to transposition into parenthetic (introductory) modal words is the stage of periphery of the parenthetic modal words that does not disturb (impair) the semantic identity of the original lexemes. The given type of inter-part-of speech transposition has functional character: it leads to the formation of grammatical homonyms such as alike short adjective / seems/looks like (adverb) – apparently/like (parenthetic modal word).

Compare typical contexts of their use:

(6) (a) Kyamal liked the name because it sounded like his favorite name: Irina (V. Tokareva. His Own Truth) (short adjective);

(c) Dmitri Fedorovich seems to have been told of insubordination (A. Azolsky. Lopushok) (parenthetic modal).

Functional modalates such as accidentally are syncretic by its nature. They are characterised by such attributes as:

1) subjective modal semantics of categorical / problematic reliability of the information (no doubt/it is certain/looks like); its irregularity (unusualness), unpredictability (by chance);

3) the presence of the morphemic suffix -o / -e, formed on the basis of flexion-suffixal morph in hybrids like it is certain, no doubt, it looks like (cf.: They look much alike: the copy is undistinguishable from the original);

4) the use in the function of parenthetic modal component in a simple semi-compound sentence;

5) the absence of a predicative function; compare with the hybrid forms’ predicate function in two-member elliptical construction, prepositively used in asyndetic complex sentences with the explanatory relations between predicative parts: No doubt: his superiority (dominance) was obvious (? There is no doubt: ...);

6) use in a detached position, along with the absence of word-modifying subordinate relations with dependent words;

7) intonation-semantic emphasis in speech (lowering of the voice tone, increase in speech delivery rate). In written speech modalates of this type are set off by commas.

The paper was prepared within the project “Comprehensive study of modalation as a type of gradual transposition of linguistic units into the semantic-syntactic category of parenthetic modal words”, performed with the financial support of the Russian Science Foundation for Humanities (grant No. 15-04-00039а).