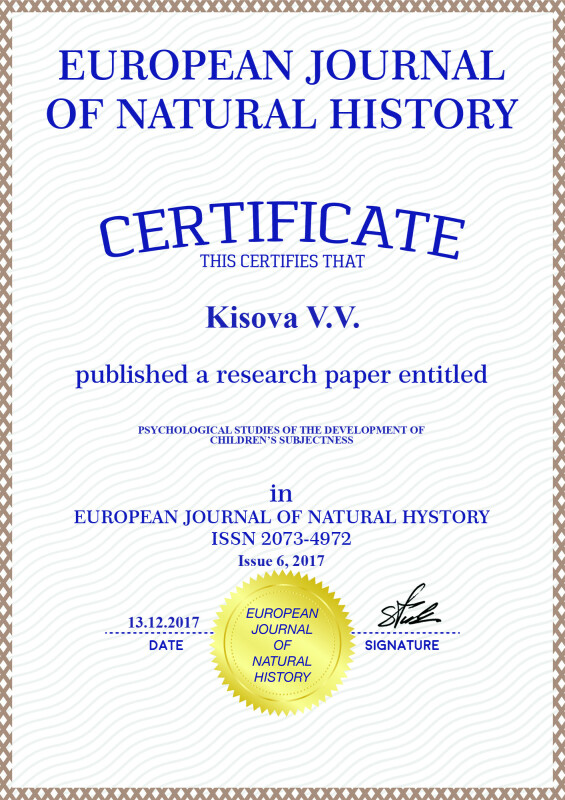 PSYCHOLOGICAL STUDIES OF THE DEVELOPMENT OF CHILDREN’S SUBJECTNESS

The category of subjectness is one of the central in the scientific research of modern domestic psychology. In the works of A.V. Brushlinsky [3] subjectness is considered as a characteristic of the personality, including the relationship of a person to their own mental processes, properties and states. K.A. Abulkhanova-Slavskaya [1] defines subjectness as the ability of an individual to correlate and evaluate (their) capabilities in relation to objective requirements, conditions and aims on the whole. In the concept of E.N. Volkova [22, p. 15] by this we mean “the property of the individual to produce interdependent changes in the world, in other people, in a person. For this property there is an underlying attitude of a person to himself as an agent”.

One of the principal questions of studying subjectness as an integrative property of the individual is definition of the peculiarity of its structure and the basic mechanisms of development. Most of the scientific works devoted to the development of the structure of subjectness touch upon the age periods of adulthood (E.N. Volkova [23], A.L. Zhuravlev [25], G.V. Zalevsky [24], V.A. Petrovsky [10], Z.I. Ryabikina [13], etc). Most attempts to structure subjectness constitute the identification of certain personal qualities and abilities characteristic of a mature person: activity, awareness, creativity, objectivity, responsibility, confidence, independence, reflexivity, freedom of choice, etc.

Deeper and more thoroughly, the problem of subjectness is presented in the works of O.V. Suvorova [15-18], which defines children’s subjectness as a property of the individual, “which is based on the attitude toward oneself as an agent realizing the transforming external (creative) and internal (self-determining and meaningful) activity that develops in conditions of polymodal (variative) socio-cultural environment” [15, p. 22]. Relying on the methodological fundamentals of the leading domestic psychological paradigms, O.V. Suvorova builds a structure of subjectness, which includes the core and peripheral components. The author understands the core of children’s subjectness as “a transforming subjective activity of the personality in the child’s system of relations” [15, p. 165]. The structure of the сore is determined by the unity of its three elements – self-regulation, motivation and self-awareness (consciousness). The content of the peripheral field of children’s subjectness is – reflection, freedom of choice, uniqueness, self-acceptance, acceptance of others, self-development. The author emphasizes that all the components of children’s subjectness “exist in the interindividual form and become actual in interaction with the adult as a carrying agent of subjectness, revealing the potential for its development in the child” [15, p. 165].

Of special interest are scientific works, which are aimed at studying the formation of subjectness in ontogenesis. The original approach is presented in the works of L.I. Bozhovich [2]. As N.N. Tolstykh [19], in the works of L.I. Bozhovich the process of personal development is largely considered through the formation of subjectness. Its formation, according to L.I. Bozhovich, occurs already in the first year of life, when the child acquires the so-called “motivating ideas” that release him from the dictates of a particular situation. This stage of the subject’s development is associated with the appearance of an internal, yet unconscious motivation, which is formed under the influence of images and representations recurring to the memory.

The next stage of the genesis of subjectness in the concept of L.I. Bozhovich is associated with the appearance of a new system formation “I” in the child. “System I” includes some knowledge of the child about himself, his attitude to himself, and also contributes to the formation of the need for independent action. L.I. Bozhovich believes that the age of three is an important milestone in the development of the child, which is primarily characterized by the development of self-awareness (consciousness).

The age crisis of seven years marks, according to L.I. Bozhovich, the next stage in the formation of children’s subjectness. The author introduces in his conception ideas about the place of the child in the social network, about his own internal position, mediation of the child’s behavior by “generalized experiences”.

An original level approach to the development of subjectness is put forward in the studies of E.A. Sergienko and her fellow research workers [4, 11]. In infancy and early childhood, subjectness is represented by proto-levels of “primary and secondary” subjectness, based on the interaction between the elements of the “I-concept” (I-ecological, I-interpersonal).

The following levels of formation of subjectness are distinguished on the basis of subject’s functions (cognitive, communicative and regulative). Behavior control is considered by E.A. Sergienko as an integrative characteristic, which includes cognitive control, emotional regulation and control of actions (arbitrariness). But on the basis of the study of subject’s cognitive function, the author identifies two levels of subject’s development in preschool age. The “agent level” (four years old) is characterized by the fact that the child develops an awareness of the difference between his own mental development and mental development of other people, it becomes possible to predict the behavior of other people and to imagine the consequences of his own behavior. “Naive subject level” (five to six years old) is characterized by the child’s ability to compare different aspects of situations and their significance for other people and for himself, the child is able to analyze human contacts and their meaning at a new level. The subsequent levels of formation of subjectness in this concept are presented as the subject of activity and the subject of life, but do not have a detailed study up to the present time.

Prior-subjectness level (the lowest level of development of subjectness) is characterized by the predominance of external motivation of activities and relationships with adults and peers mediated by the playing motive, broad social motives (emotional acceptance of a peer, positive evaluation, approval, praise of an adult). Pre-subjectness level (the average level of development of subjectness) is defined by the author as critical and transitional level for the development of children’s subjectness. The main characteristics of the level are the formation of not only external but also internal motives, the preservation of inadequate self-esteem in most children, the inclination toward external control with the appearance of elements of self-control (autonomous-reproductive, searching- dependent level of self-regulation).

Pro-subjectness level (high level of development of subjectness) implies the predominance of internal motivation, adequate self-esteem, the dominant levels of self-regulation are searching-autonomous and searching-dependent. Creative kind of traditional children’s activities, educational and cognitive activities, high initiativity, independence in relations, and the ability to cooperate with peers are characteristic of these children.

Undoubtedly, in the studies presented above, we can see only the formulation of the initial principles of development of children’s subjectness, the realization of which in the concrete psychological terms requires further clarification and development. In our opinion, of particular significance is the task to develop the question concerning the mechanisms of subjectness formation in childhood. The most promising direction in this regard is the recourse to such a psychological phenomenon as self-regulation. This approach is presented in the works of V.V. Kisova [5–7, 11], N.F. Kruglova [8], A.K. Osnitsky [9], N.O. Sipachev [14] and other researchers.