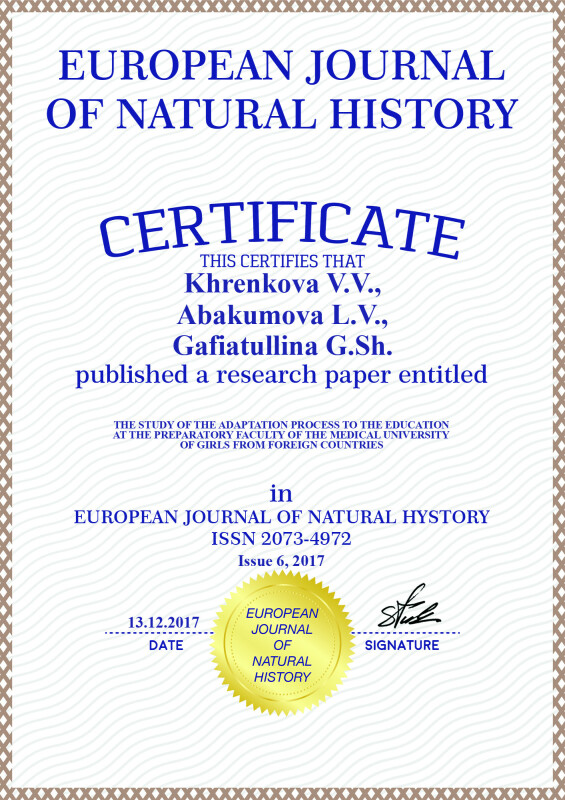 Two groups of girls 18-19 years were surveyed: primary group – students of the preparatory faculty for training foreign citizens; control group – students – citizens of the Russian Federation. The adaptive capabilities of the girls’ organisms were assessed according to statistical, geometrical and spectral characteristics of heart rate variability. More than 40 % of women–foreign citizens did not adapt to the changed conditions of life, which was manifested by the predominance of central mechanisms of heart rhythm regulation in relative functional rest and low level of functional reserves of the organism. The most sensitive indicator of functional reserves of the cardiovascular system is an index of centralization.

For various reasons adaptation process of foreign students proceeds with difficulties [1, 3]. To assess the state of adaptation mechanisms, manifestations of adaptive changes of the organism of participants of educational process heart rate variability (HRV) method is widely used. [2, 3, 4, 5].

The aim of the study was to assess the peculiarities of adaptation of girls from foreign countries studying at the preparatory faculty of Rostov state medical University on indices of HRV. The study involved 2 groups of girls 18-19 years old: the primary one – foreign students (36 people); the control group – students – citizens of the Russian Federation (31 people). The body’s adaptive abilities of the girls was assessed by HRV, analyzed in five-minute segments of ECG, registered in terms of relative functional rest. Mechanisms of regulation of cardiac rhythm were assessed according to statistical, geometrical and spectral characteristics [5]. Most statistical and geometric indices of HRV among girls of the primary group differed significantly from those of girls in the control group and testified lower reserve adaptation possibilities. The duration of RR-intervals and their dynamics of most of the girls from the main group indicated the increased tone of the sympathetic centers. The ratio of the sympathetic and parasympathetic effects was evaluated using Baevsky tension index (TI). Mean group values in the primary group were significantly higher than in the control group. 77.4 % of girls in the control group had balanced sympathetic and parasympathetic impact on cardiac rhythm; 55.6 % of girls in the primary group and the rest had the tension of the sympathetic centers of various intensity. All the patients from the control group had moderate tension, from the primary group – 27.7 % of women had moderate tension, the rest had prominent or overtension, which is an indicator of violations of the adaptation mechanisms. The disturbance of the autonomic balance with a predominance of sympathetic influences on girls of the main group was also confirmed with significantly low power HF and their significantly lower contribution to TP and more TP representation in LF. According to sympathovagal index LF/HF the autonomic balance or moderate tension of the parasympathetic centers, which is typical for functional rest, was revealed in the majority of women (93.5 %) from the control group. Only 6.5 % of girls had moderate tension of the sympathetic part of the autonomic nervous system (SP ANS). In the main group moderate and prominent tension of SP ANS were detected in 41.7 % of girls and the autonomic balance or moderate tension of the parasympathetic centers in the rest of the surveyed. Another important indicator of the ratio of regulatory influences on heart rate is the index of centralization (IC). Significantly increased values of IC were detected in girls from the primary group: 70.5 % of them had central mechanisms involved in the management of cardiac rhythm in conditions of functional rest, whereas only 12.9 % of girls had that in the control group.

Thus, according to the heart rate variability indexes, we detected that more than 40 % of female students at the preparatory faculty for foreign citizens had unsatisfactory adaptation to the changed conditions of life, that was manifested by the predominance of central regulation mechanisms of heart rhythm in relative functional rest and low level of functional reserves of the organism. The most sensitive indicator of functional reserves of the cardiovascular system is an index of centralization.

The work is submitted to the International Scientific Conference “FUNDAMENTAL AND APPLIED IN MEDICINE BIOLOGY”, November 9–15, 2017, UAE (Dubai), came to the editorial office оn 17.09.2017.