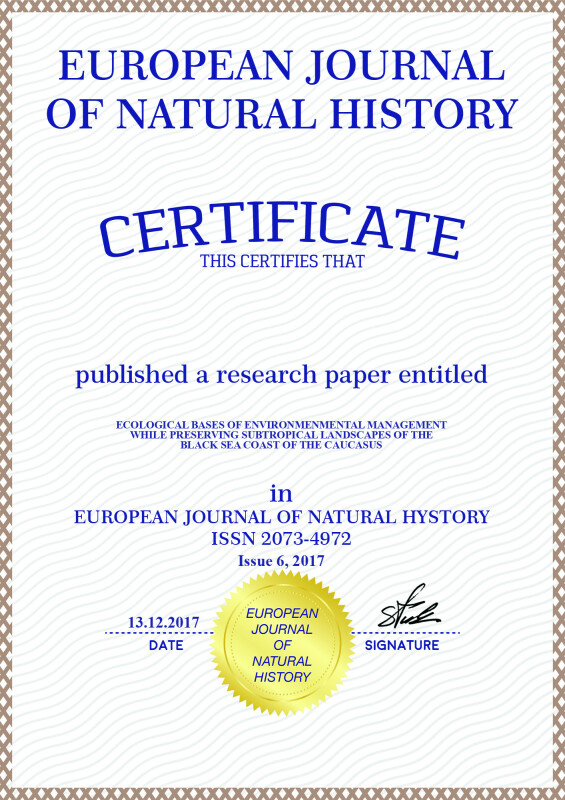 Article in PDF
1765 KB
The researching of the landscapes based on focusing on endangered native species and invasive forest species suggests an ecological approach to the development of technologies for the implementation of these projects in the subtropics of the Krasnodar region. The object of attention of ecologists and dendrologists became the area around urban space of Sochi along created bypass roads. Scientifically sounded project execution will get landscapes that can become a model of combining unique representatives of caucasian flora with introduce species.
flora of caucasus
community structure
introduce and native species
creating landscapes
1. Akatov V.V. The structure of forest stands of Western dominance in the Caucasus. Factors and mechanisms. Progress of modern biology. – 2014. – Volume 134, no. 3. – P. 257–270.
2. Bebija S.М. Problems and prospects of introduction in Colchis wood floristic refugiume // Fundamental and applied problems of botany at the beginning of the 21st century. H. 6. – Petrozavodsk, 2008. – P. 185–186.
3. Bityukov N.A. Ecology mountain forests of the Black Sea region. Mmonograph. – Sochi, 2007. – 292 p.
4. Zernov A.S. Plants of the North-West Caucasus. – M. Izd. MPGU, 2000. – 130 p.
5. Zernov A.S. For the accidental flora of the North-Western Caucasus. Bot. log. – 2001. – T. 86, No 6. – P. 80–83.
6. Karpun Y.N. Decorative tree and herbaceous perennials // Recommendations for species and high-quality composition. – Sochi, 2011. – 150 p.
7. Korkeshko A.L. The assortment of trees and bushes for enrichment of forest parks of Sochi of the Matsesta area. – Sochi, 1957. – 50 р.
8. Korkeshko A.L. Results of acclimatization of tree species and prospect of enrichment by them of forest parks and parks of the Sochi-Matsesta area. “Woods of the Black Sea coast of the Caucasus”. – M., 1959. – Р. 126–189.
9. Korkeshko A.A. Keep notable landscapes Sochi. Papers of the Division of the geographical society of the USSR. iss. 2. – Leningrad. 1971. – P. 409–416.
10. Korosov A.V. Principle of emergence in ecology // The principles of ecology. – 2012. – No 3. – P. 48–66.
11. Skipina K.P. Subtropical plants in the composition of the flora of the Caucasus // J. Successes of modern natural science. – 2008. – No 6. – P. 54–56.
12. Skipina K.P. Anthropogenous impact on specific structure of the colchis wood as a part of the flora of the Caucasus // European Journal of Natural History. – 2017. – No. 4. – P. 62–64.
13. Solodko A.S., Kirij P.V. Red book. Rare and endangered species. T. 1. Plants and mushrooms. – Sochi. 2002. – 145 p.

The study of founding conditions of the assortment of parks and forest parks along the Black Sea coast of the Caucasus for quite a long time has provided an extensive material on the justification of the right approach to the creation of such communities. According to the results of the acclimatization of introduce species of ornamental plants designed range and suggested the scientific basis for its enrichment. Exotic variety of alien species successfully took its niche in the community of the Caucasus forests as part of Park zones [8]. The work made by several generations of scientists and specialists in the field of plant introduction reached significant progress in the enrichment of the Black Sea coast of the Caucasus valuable exotics.

Scientists have developed the range of tree and shrub species and successful experience of forest parks in the resort area of the Black Sea coast can be confidently used by modern specialists. Creating landscapes based on endangered native species and invasive forest species suggests an ecological approach to the development of technologies for the implementation of these projects. Competent and experienced dendrologists and employees of forestries can develop and successfully implement them. There are all the prerequisites for the proposed approach to solve the problem. The key to is to understand the opportunities of ecologically based impact on the formation of the modern landscape, in both natural and artificially created ecosystems.

Currently, the environmental focus has proven to be the territory of the newly created Sochi, The Black Sea zone bypass roads around urban space resort, where it is necessary to apply measures not only in reconstruction, but also to establish landscapes in places directly exposed to anthropogenic effects. Without active influence on the composition of those Territories happens uncontrolled succession. The result of this unmanaged process can provoke colonization of space around the bypass roads in the region of low and low ornamental species Acacia type.

Scientifically based activities for creating landscapes in areas adjacent to the road network will create a unique color of the green belt surrounding the city territory. It is necessary to launch a project allowing seamless connections and Park and green zones. Created landscapes may serve as a model of combining unique representatives of Caucasian flora with invasive species, obtained over a long period of growth opportunity to be part of plant diversity of wild flora and with high decorativeness [11].

Each species has a number of functional traits that contribute to sustainability and community, providing it with species diversity. Functional traits of species, plant community, composing can solve many tasks in different types of plant communities. An example of such a combination of coherence based on functional signs can serve as distribution tiers of forest communities on needs of plants in light intensity from light demanding to shade-loving plants. Subsequent manifestation of signs relations of plants to light intensity in a zone of growth is reflected in their morphological features. As a result, the set of symptoms increases, most of them had no already any direct relevance to the functioning of the plant community. Variation of the functional traits in species community testifies to differentiate their ecological niches. In the number of works were traced some changes of the functional traits in species composition of communities of the environment and gradients during successions.

The process of the formation of a long-term, even it is a man-made. In addressing the problems of selecting plant species introduced in the community or communities formed the newly occupied territories, presupposes the existence of ecological competence occurrence introducend plants in men the existing composition of vegetable communities not excluding the possibility of changing Aboriginal dominants of biological and landscape diversity of the subtropical zone of Colchis wood foreign species. The ecological basis for conservation and enrichment of species of wood and shrub composition of forest communities has the value assessment of the impact of such replacement. The rules provided for the introduction of the importance of the preliminary trials of introduced species to prevent clogging of forest crops of low forms of trees and shrubs. However, the 150-year history of spontaneous introduction of tree and bush species from subtropical regions of the world enabled by “trial and error” to weed out of the garden of flora species are not environmentally suitable niches for the occurrence of these populations in cultural and community composition of wild flora of the Black Sea region. For quite a long period introductions on the Black Sea coast appeared about 5000 species new for the region of subtropical plants among which there were even representatives of the tropics [6].

Almost 150-year experience of introduction of tree and bush species on the Black Sea coast of the Caucasus from the subtropical regions of the world has contributed to the unique landscape of this natural park greenhouses. [8, 9, 11]. Ecological characteristics of the region left the right choice for those types, biological features which correspond to the climatic conditions of the Black Sea region. In their number, obviously, plants primarily consisted of capable combination of environmental factors to reach flowering with the formation of full seeds. The number of introducend species of tree and shrubbery, who have attained full acclimatization in terms sufficiently large black [11, 12]. Exotic variety of these species successfully took its ecological niche in the community of the Caucasus forests as part of Park zones. Thus, the work of several generations of scientists and specialists in the field of plant introduction made significant progress in the enrichment of the Black Sea coast of the Caucasus valuable exotics [9].

Colchis subtropical wet forest landscapes in Olympic construction zone under the circumstances need active recovery. Problem solving, first of all, lays in association with the creation of the forest communities that are able to preserve a favorable environmental conditions. Anthropogenic impact on the forest recovery process of colchis type with all year long-green undergrowth is based on change preceding the natural composition of ecosystems and is characterized by large spatio-temporal borders [3]. Transformation of natural landscapes according to the laws of succession passing does not provide full restoration of forest ecosystem parameters [7]. New forest community formed on the basis of the generic breeds with presence invasive floristic component will differ considerably in species composition. Ecological regularities passing successions will be fully monitored anthropogenic influence considerably changing under the influence of the main forestfounding species [5]. As a result, the pattern of species diversity within a particular community can be a manifestation of his emergense, reflecting overall distribution resulting space between invasive and native species in conditions of formation ecological niches [10].

Community structure, built in lieu of Aboriginal dominants foreign, can be linked to data changes of this kind, which creates a new Wednesday for other species in this community. On the basis of the ecological and biological characteristics of the dominant species, reflecting the nature of their domination, there are conditions for the formation of emergense. The conditions determining this possibility include a favorable combination of population bases the whole communities with environmental conditions this biocenosis [1]. It is also assumed that the change of aboriginal dominants foreign views should not lead to a substantial increase in the level of their domination of significant effects on the species richness of communities [2].

Any deviation from the literate science-based conservation action of the North-West Caucasus causes irretrievable losses in forest communities [4]. As a result, 78 species of vascular plants of the Black Sea region has became the property of the Red Book of Russia. A part of the Red Book of Sochi entered 200 representatives of flora of the region, or 10 % of the total number of species [13]. This statistic makes it necessary to draw attention to the creation of the community based forest flora Black Sea environmental laws based their natural occurrence or under direct human intervention. This intervention must be built on respect for the sequence of creation of sustainable communities on the principle of emergence vegetation in natural conditions. But following the specified principle will create an algorithm of seaweeds at each particular site. First of all, you need to determine the species composition of the forest providing a mix of local native species recognized the situation of endangered. The involvement of representative invasive species as a dominant should be based on wide experience studying their ability to coexist with other species on the principles of the emergense.

The work is submitted to the International Scientific Conference “Problems of ecological monitoring”, ITALY (Rome, Venice), 17–24 Dec 2018, came to the editorial office оn 10.11.2017.