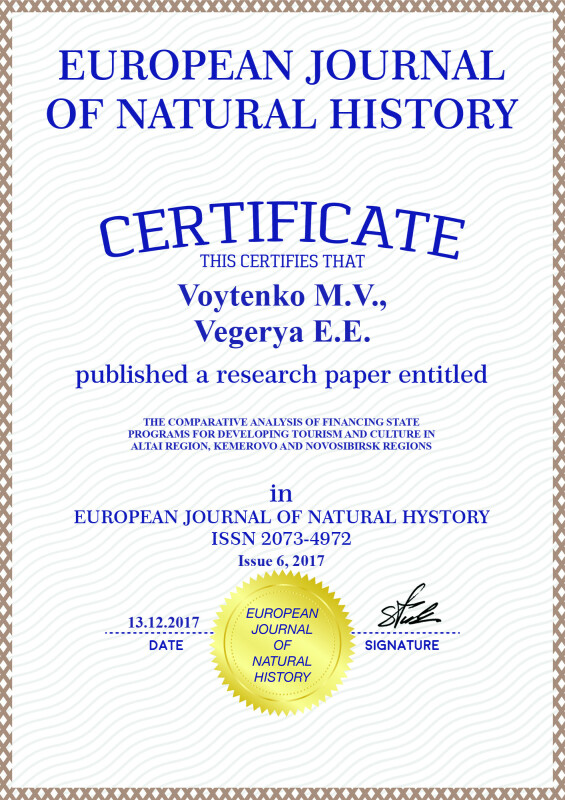 THE COMPARATIVE ANALYSIS OF FINANCING STATE PROGRAMS FOR DEVELOPING TOURISM AND CULTURE IN ALTAI REGION, KEMEROVO AND NOVOSIBIRSK REGIONS

Tourism is a complex and versatile sphere with its role in the world economics steadily growing every year.

In the beginning of the XXI century tourism became one of the leading directions of socio-economic, cultural and political activities of the Russian Federation in its regions [1].

Tourism is viewed as a substantial part of innovative development of our country in a long-term outlook, economically profitable and environmentally friendly branch of national economics [2].

Altai regionhas a wide range of natural and cultural resources and, therefore, can offer practically all kinds of tourism. Meanwhile, neighbouring Kemerovo and Novosibirsk regions have its tourist zones, which can easily compete with Altai region. Each of them has its advantages, and these objects can become the most significant tourist regions of Russia if combined with a highly developed infrastructure.

Nevertheless, the procedure of financing these regions by the state programs has noticeable differences [3, 5, 7, 8].

For the analysis the following tourism development programs were studied:

We are conducting a comparative analysis of these programs’ passports in order to reveal some problems of the state tourism development program financing procedures in the regions of our interest.

The first important detail is an insignificant difference between programs passports in wording goals and objectives. Starting with the title of the examined state program of Kemerovo oblast, it is noticed that the development of tourism in this region is placed on the same footing as forming and application of the state youth policy and state policy in the sphere of culture and sports. Whereas, the key target of tourism development program in Altai region is its stable developing and promoting of the Altai tourist product to Russian and external markets [4].

The mentioned strategy does not anticipate the aim of creating a tourist complex to be integrated into Altai region economics as it is written in the Novosibirsk region’s program.

The goals of the mentioned program appeared to be similar for Altai region and Novosibirsk region. They are aimed at creating favourable tourist climate in the regions, forming a positive image and providing tourist activity development. In a general way, the rest materials of the state tourism development program passports in the studied regions are similar.

Further we are considering the examples of the program realization on the basis of 2015 year in each case.

In Altai region during the survey period the development of tourist infrastructure and tourist service market forming were continued. The program “Tourism development in Altai region” in 2011–2016 contributed to the implementation of the major projects in Altai region: building the Belokurikha-2 resort, providing the development of the motor touring cluster “Golden gates”, creating the tourist-recreational cluster “Barnaul – a mining city”. The tourist route “The Small Golden ring of Altai” started its functioning; the new interregional transborder 2,000 km length tourist route “The Big Golden ring of Altai” and the route “Kossack’s horseshoe of Altai” were tested for the first time.

Concerning Kemerovo oblast, it has an intensely developed tourist infrastructure and big tourist complexes such as “Sheregesh”, “Tanay” and others. Experience shows that funds allocated for the state program aimed at tourism development in this region are enough to support the already existing tourist cluster. The general supply is mostly forwarded to the advertisement and stable tourism development in the region.

The programs are realized by means of holding various events. Thus, there were held 40 events in Altai region during 2015, 3 events were held in Novosibirsk region and 1 event took place in Kemerovo.

Comparing the sources of financing culture development state programs during 2015 in the regions of our interest, we can conclude that each of these programs is financed practically in full from the subject budget. In Altai region 95 % of means for carrying out the program came from the regional budget, almost 3 % came from local budget and only 1 % was from federal budget. We see approximately the same distribution of funds in the programs of neighbouring regions. In Almost 98 % of funds for carrying out culture development program in Novosibirsk region came from regional budget and only 2 % came from extrabudgetary sources, federal and local budgets.

The sources of financing state programs on culture development in Altai region, Kemerovo and Novosibirsk regions in 2014–2016, thousands of roubles

It is significant that the budget for carrying out the culture development program in Kemerovo region consisted of insignificant part from natural and legal persons’ funds, which demonstrates that crowdfunding is being practiced in Kemerovo region. It means that citizens and enterprises have an opportunity to financially support responsible for the state program executives.

Tourism development programs in different regions of the Russian Federation are being successfully carried out. However, the major problem is that the state budget remains the main source of financing. The funds from natural and legal persons constitute only a small part of financing the development of tourism programs, which means insufficient confidence of private investors in the programs realization.