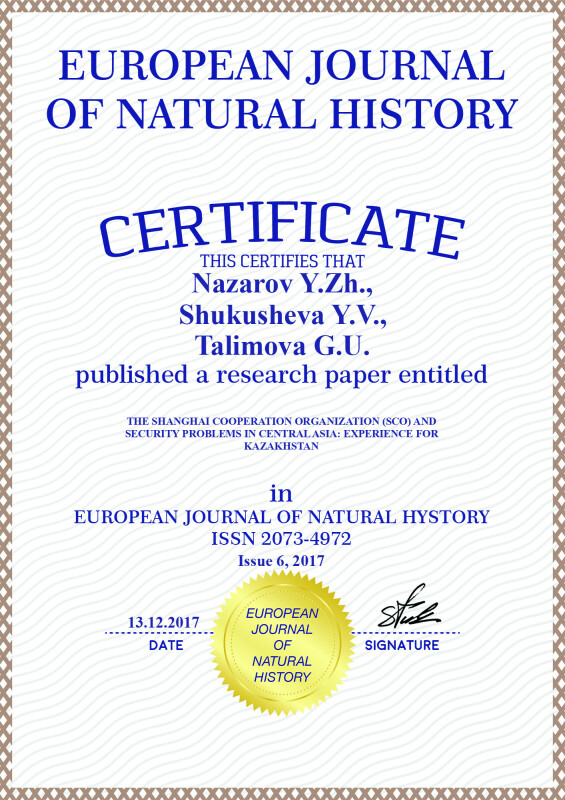 Article in PDF
1766 KB
This article analyses the peculiarities of the evolution of the Shanghai cooperation organization (SCO), prospective directions of activities of the security problems in Central Asia. Today, the organization meets the requirements of geopolitics, the basic trends in the world economy, carried out systematic work on the consistent achievement of the key objectives of effective implementation of all joint decisions. Special attention is paid to issues of overcoming new challenges, threats to stability and security. The Shanghai cooperation organization has created a set of mechanisms or arrangements capable of managing security processes in the region. Placing at the forefront of the fight against “three evil forces” the organization began to take shape in the structural and legal way. In General, the fight against terrorism in the framework of the SCO, the struggle of the participating countries, and not the Shanghai cooperation organization, serving a unifying framework to coordinate the work of the security services of all six countries in the fight against “three kinds of evil”. The fight against terrorism has become the most successful area of cooperation, in General, for a good elaboration strategy. It has wide and fruitful cooperation between all competent authorities of the member States of the SCO, as in the exchange of information and coordination of practical work.
shanghai cooperation
security problems
1. Komissina I.N., Kurtov A.A. the Shanghai cooperation organization: the formation of a new reality / I.N. Komissina, A.A. Kurtov. Moscow: RISI, 2005. 119 p.
2. Special services of the SCO will be engaged in the joint fight against cyberthreats // info SCO: URL: http://www.infoshos.ru/ru/idn=12656 (date accessed: 09.06.2015).
3. According to eyewitnesses, the events unfolded on well-established and already known to the intelligence services methodology, therefore, was nipped in the Bud bloodless and professional. In the end the attempt of another “color revolution”, this time in China failed.
4. “Tulip revolution” in Kyrgyzstan has managed in 52 million dollars. // Time of the East: URL: http://www.easttime.ru/news/kyrgyzstan/tyulpanovaya-revolyutsiya-v-kyrgyzstane-oboshlas-v-52-milliona-dollarov/8288 (reference date: 14.07.2015).
5. The U.S. will provide non-governmental organizations of Central Asian countries us $ 3.8 million // Time of the East: URL: http://www.easttime.ru/news/tsentralnaya-aziya/ssha-predostavit nepravitelstvennym-organizatsiyam-stran-srednei-azii-38-mil treatment: 21.07.2015).
6. Popov D.M. Digital diplomacy of the United States / D.M. Popov // the Russian Institute for strategic studies: URL: http://www.riss.ru/analitika/4122-5789#. VLi4V_bWhC8 (reference date: 03.06.2015).
7. Meena Singh Roy. The Shanghai Cooperation Organisation. India seeking new role in the Eurasian regional mechanism / Meena Singh Roy // Institute for Defence Studies and Analyses: URL: http://www.idsa.in/monograph/SCOIndiaandEurasia (reference date: 25.08.2015).
8. Under the auspices of the SCO appears the staff of the national military advisors // info SCO: URL: http://www.infoshos.ru/ru/ idn=14299 (reference date: 25.06.2015).
9. Structure of the SCO foiled more than 300 terrorist and extremist crimes // TASS: inform. Agency. 2015. July 10. URL: http://tass.ru/mezhdunarodnaya-panorama/2109844 (reference date: 17.08.2015).

The Shanghai Cooperation Organization (SCO), created in June 2001 by the efforts of Russia, China, Kazakhstan, Kyrgyzstan, Tajikistan and Uzbekistan, has now become a full-fledged regional organization of a new type, built on the principles of mutual trust and mutually beneficial cooperation. For a short historical period of time, the SCO has evolved from a consultative mechanism of neighboring countries to settle border issues and strengthen confidence-building measures in the military field to a multidisciplinary international organization with significant military and economic potential.

Starting with cooperation in the fight against international terrorism, separatism and political extremism, it expanded the scope of its activities to the economic sphere, and then to such areas as health, education, culture, tourism, etc. [1, p. 78], which indicates that the Organization was created not only to contain destructive forces, but also to bring the peoples of the participating countries closer for further growth of their economies and improvement of the well-being of citizens.

The SCO’s development strategy for the SCO up to 2025 will allow to raise the SCO to a new level of cooperation. Many international organizations and individual countries show interest in cooperation with the SCO in various fields, and some express their intention to become its members. Despite the short period of its existence, the SCO as a new geopolitical reality attracts the attention of the world community, which naturally raises the question of the prospects for its further development. In the conditions when the West has taken a course on the international political and economic isolation of Russia, the task is to neutralize this confrontational scenario, for which it is necessary to increase the geopolitical weight of such international and regional associations based on the principle of multipolarity and distancing from the West. The SCO is among them.

The SCO’s system-forming element is the counteraction to international terrorism, separatism and political extremism. Currently, these forms of threats have added one more – cyber-terrorism, which is a serious challenge for the entire international community, both for individual states and for business structures [2].

A serious legal framework for cooperation of member states in this field has been formed. The culmination of building up the SCO’s security efforts was joint military exercises. At present, this direction of activity by the efforts of the Russian side still continues to firmly hold the priority on the agenda of the SCO.

The dissatisfaction of the West with the independent foreign policy of Russia and China in the international arena, the growth of their economic and military-technical might, and the emerging strategic partnership between Moscow and Beijing challenge the dominant position of the United States in the world, which forces Washington to intensify efforts to destabilize the domestic political situation not only in these Countries, but also in countries that are their closest neighbors. Thus, large-scale riots in Ukraine were initiated, which led to a coup d’etat. In turn, student unrest in Hong Kong (the so-called “umbrella revolution” and the “occupy cent” movement) [3] showed that the threat from the West exists not only for Russia but also for China.

Moreover, these events, similar to the wave of “Arab revolutions” in the Middle East, were directed by a single and the same scenario known to all, which had previously been used during the “Rose Revolution” in November 2003 in Georgia, the “Orange Revolution” in December 2004 in Ukraine, the Kyrgyz “tulip revolution” in March 2005. Naturally, all these so-called “revolutions” were organized with the financial support of the West. For example, according to french sources, about $ 52 million was spent on the revolution in Kyrgyzstan [4]. “Color revolutions” in the post-soviet space are unfolding according to a single scenario, based on the information war and the manipulation techniques. External forces (a number of well-known funds, institutes and NGOs) under the guidance of the State Department and the CIA of the USA worked out well-proven and well-proven methods (besides financial assistance, the leaders of the protest movement received detailed instructions on organizing mass riots) under the control of the current regime.

In case of insufficient social base for rapid destabilization of the situation in certain CIS countries, the US relied on the use of the national factor, since the incitement of nationalist conflicts within the country makes it very easy to aggravate the internal political situation. A special role is played by NGOs.

It is indicative that in many inter-ethnic clashes, which occurred, for example, in the last decade in Central Asia, the foreign track is clearly traced. This also concerns to the clashes in Andijan (Uzbekistan) in 2005, and the interethnic pogroms in 2010 in Osh (Kyrgyzstan), whose active “observers” were employees known for their interference in the internal affairs of other countries of the United States Agency for International Development (USAID) And US-controlled NGOs.

The opportunity to influence the Central Asian media is not overlooked, and not on the state ones, which are tightly controlled by the authorities, but on private ones. For example, USAID recently launched a new project “Support for access to information” in Kazakhstan, Tajikistan and Kyrgyzstan for a total of $ 3.8 million for 3 years. Its goal is to assist non-state media in the region in the process of their transition to digital broadcasting, the improvement of the legislative framework of the media sphere, and the activation of regional cooperation of independent media. As expected, the audience of independent television companies by 2017 will increase by 40 % [5]. Simply put, loyal personnel are being trained, a network of so-called “independent media” is growing, which will later engage in politics. This is how the new opposition is grown and the basis for possible future use of networked information technologies is laid. According to experts, in the Central Asian region there are quite favorable conditions for applying modern schemes of information impact on the type of scenarios previously worked out in North Africa and the Middle East [6].

The mobilization of Islamic terrorists in the Syrian conflict is much more active than in other similar conflicts of recent times, and the corresponding ideological processing of the “contingent” is conducted in all the Central Asian republics without exception. It facilitates the sending of fighters to Syria visa-free regime, established by Turkey with the countries of Central Asia and Russia.

The authorities of the post-soviet republics are trying to prevent the departure of their citizens to Syria. In the countries of the region, new normative acts were adopted. However, the return of citizens to their homeland after participating in the fighting in Iraq and Syria is the main source of alarm for the authorities of Central Asia.

The current situation in the world is characterized by the fact that international terrorism (for example, the DAIS) began to adopt such methods and take such scale that it is effective to parry its threats and actions can be extremely difficult without adequate connection of military capabilities. In this connection, the question arises of the need to create a military structure of the SCO.

Apparently, the main reason for this situation was the SCO’s cornerstone principle of non-interference in internal affairs and respect for the sovereignty of all participating countries. This principle, combined with chronic regional disunity, severely limits the possibility of collective action by the Organization [7]. Therefore, military cooperation is one of the most controversial aspects of its activities. On the one hand, this cooperation is not among the SCO’s main priorities. On the other hand, it is of great practical interest for all participating countries. Russia here is the leader of this track, as it is present in all spheres of global security, participates in resolving the main regional conflicts in the world.

The work of the SCO is limited by consultations and meetings of representatives of international organizations and Security Councils of the SCO countries, and in practical terms – the conduct of command post and tactical exercises held at least once a year under the auspices of the SCO Regional Antiterrorist Structure (RATS). Apparently, at present, the SCO, with Russia’s involvement in the security sphere, is focusing on cooperation with the CSTO, which already has Collective Rapid Response Forces in its composition.

At a meeting of the heads of the military departments of the SCO member states in St. Petersburg in July 2015, a decision was taken to establish an apparatus of national military advisers under the aegis of the Organization. Such a structure can serve as a “generator of ideas” for guiding the habits of recommendations on the use of the capabilities of participating countries in the field of security [8].

Thus, at present the antiterrorist component is actively growing in the SCO. At the summit of the Organization in Ufa in July 2015, a program to combat terrorism, separatism and extremism for 2016–2018 was approved. The structures of the SCO over the past year have stopped at the stage of preparation of 317 crimes of a terrorist and religious extremist nature [9]. The task of developing the SCO Convention on Combating Extremism is on the agenda. At the same time, it recognizes that the Organization has not yet mastered all the integration mechanisms for ensuring regional security and the security of participating States. It is obvious that the existing relationships within its framework can not yet fully guarantee a sufficient counteraction to the growing challenges and threats. The formation of an effective system of international security faces the problem of the lack of a real mechanism for an adequate, legally justified response to these challenges.