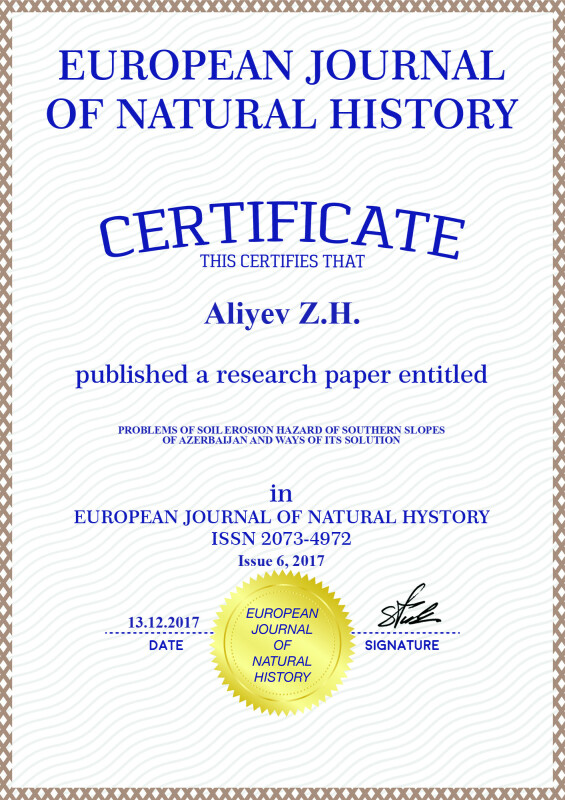 Aliyev Z.H. 1
1 Institute of Erosion and Irrigation NAS of Azerbaijan

As in all mountainous regions of Azerbaijan southern slope of the Greater Caucasus, which includes Sheki-Zagatala cadastral area also has quite a difficult environment, where widespread subalpine and alpine meadows, which have enormous environmental and climatic importance of the forest, as well as extending the broad area of arable land , Which under the influence of natural and anthropogenic factors are to varying degrees subject to erosion processes. Summer pasture subalpine due to poor development of the grass cover, excessive grazing especially in early spring, are a major cause of erosion, which not only quantitatively but also qualitatively cause significant damage to the soil cover, washing fertile upper humus layer, forming on the slopes ovrazhno- Beam network.

In connection with the development of the livestock country, at this stage of the protection of mountain meadows, creating a stable food supply, the study of their demands for nutrients is especially important where the Sheki-Zagatala cadastral area of the total area of 8840 km2, located on the southern slope of the Greater Caucasus, has Considerable potential in the development of the food base. Summer pastures of this zone are mainly represented by a low-level mesophilic herbaceous vegetation of the family of cereals, along with which are also represented by fescue (Festura L.) and others.

The purpose of our quest is to carry out a comprehensive analysis of a number of environmental factors that contribute to the development of erosion, determining the degree of damage soil fertility and to identify the best ways for the settlement, the protection and restoration of fertility.

Sheki-Zagatala cadastral district, located on the southern slope of the Greater Caucasus, borders on the north and northeast. The main watershed ridge of the Greater Caucasus, in the south-west by the Alazani Valley, in the west and north-west Belokan and Mazimchae with Georgia, in the east and southeast of Ismayilli and Oguz, between elevations of 600–3466 m above sea level.

Geologically and geomorphologically, the region has a fairly complex structure, where high mountains and steep slopes alternate with foothill areas and plains, which in turn contributes to the development of a fairly variegated climate, a variety of vegetation cover The complexity of the morphological structure, the presence of steep slopes, as well as anthropogenic forcing has a significant value of the intensity of surface runoff, which in turn enhances the development of erosion processes, thereby creating a wide ravines, which in the final step is beamed by changing geomorphological image of the whole area.

B.A. Budagov [3] in geomorphological relation divides the territory into 4 zones:

a) highlands; b) the middle mountains; c) Low mountains and d) Plains.

The highlands are located at an altitude of 2000–3466 m above sea level. The relief is represented by a strongly dissected erosion-denudation form. Soil-forming rocks mainly consist of clays, limestones and shales. For this zone is characterized by intense mudslides, causing significant damage to the environment, especially in the destruction of soil fertility.

The mid-mountain region is located at an altitude of 1000–2000 m above sea level and is characterized by the presence of a dome-shaped and stepped watershed. The slopes of the mountains are strongly dissected and the erosion-denudation relief dominates. Soil-forming rocks comprise shales, limestones and sands are encountered basalts, gabbros, hydromicas, andesite etc.

The low mountain range is located between isogypses 600–1000 m above sea level. The surface is represented by narrow belt islands, separated by wide valleys. Soils are formed on sediments of the 3rd (Paleogene, Neogene) and 4-period Cenozoic.

The plain zone is located at an altitude of 200–600 m above sea level, where mainly alluvial-proluvial deposits are located, on which fertile soils intensively used in agriculture are developed.

In the Sheki-Zagatala zone E.M. Shikhlinsky [14] distinguishes 3 types of climate: 1) moderately warm, characteristic for the plains areas with a relatively mild winter; 2) a moderately warm wet type with a uniform distribution of precipitation throughout the year, covers the foothills of the zone and 3) a cold climate with humid winters characteristic of the foothill and mountain areas of the zone.

The annual amount of precipitation varies with the increase in the hypsometric level and corresponds not to the plain 939 mm, but in the highlands 1400 mm.

The average annual relative air humidity is 71 % fluctuating over the season from 59 to 87 %.

Agrychay and the left tributaries of the Kura River. The tributaries of Alazani, are pp. Mazymchai, Balakenchay, Catechay, Galachay, Muhahchay, Kurymychay. These rivers with sleeves, especially on steep slopes, erode the soils under forest and meadow formations, which is particularly intense in the period of prolonged and intensive precipitation.

The change in temperature and precipitation along vertical zonality, contributes to a regular change in the species composition of the vegetation cover, which is divided into 3 zones: a) Alpine and subalpine meadows; B) mountain meadow; (C) Plains.

The first geobotanical studies in the Sheki-Zagatala zone were carried out by N.I. Kuznetsov [7], later by L.I. Grossgeim [5], V.D. Hajiyev [4], L.I. Prilipko [8] and others.

Subalpine meadows located at an altitude of 1800–2600 m are represented by mesophilous perennial vegetation and are widely used in the form of summer pastures.

The incompletely developed mountain meadow soils are located on the territory of summer pastures and cover 236.8 hectares or 0.17 % of the total area. The relief of the territory consists of mountain slopes with a south-western slope. There are outcrops of rocks in some places. Soils are mostly thin with an extremely rare plant cover.

The densely soddy mountain meadow soils are located on different sites of summer pastures, amounting to 1005.4 hectares or 0.82 % of the total area.

Loose turf mountain meadow soils are formed on summer pastures with a total area of 11,107.5 hectares or 8.28 %. The relief consists of slopes with different exposures and wide ravines. 11094.5 ha These lands constitute pastures, and 13 hectares of shrubs. According to the morphological description of the profile, the upper horizons have a brown color, shining towards the lower horizons and having a light brown color and a lumpy structure. Due to the leaching of the soil, they do not boil.

Bioclimatic conditions promote not complete decay of organic substances, in connection with which the accumulation of humus occurs.

The total porosity on the upper horizons of non-leached soils is 69–71 % and is estimated as expanded.

According to Mammadov G.Sh. [10] based on the bonitet calculations, the highest score of 90 is for mountain forest brown cultivated soils occupying 61140 hectares or 0.71 % in the whole country. In addition, mountain-meadow turf soils -89 and mountain-forest-meadow soils-86 were also given high bonitet ratings. Minimal meadow primitive values were obtained in 20 points, and mean-63 meadow (alluvial-meadow) Table).

Erosion processes, being one of the factors of exogenous forces, plays an important role in the formation of the landscape as a whole. Regardless of the change in the relief, on forest plots and territories covered with grassy vegetation, exogenous processes are very poorly manifested. The decisive factor preventing erosion processes is the vegetation cover. Erosion processes are especially evident in areas with a weak vegetation cover. Anthropogenic impact on the environment, cultivation of crops on the slopes of mountains, carrying out plowing along the slopes, intensive development of pastures, deforestation, etc. are the main factors that intensify erosion processes and, accordingly, soil degradation. As a result, the upper humus horizon drifts down the slope. There is a deterioration in the physical properties of soils, especially water permeability of soils, which contributes to increased runoff [12], as well as the removal of fine particles enriched with mineral elements [13].

Excessive grazing of cattle on summer pastures and pastures, especially in early spring, contributes to the destruction of the turf of the soil, thereby creating furrows, which in turn intensifies the erosion of meadows.

On steep slopes, the soil cover is thin, easily eroded, resulting in the parent rock entering the surface, the degradation of which accelerates. On the plowed slopes accumulated water in the furrows, sharply worsens the physical properties of the soil and contributes to the development of beam erosion.

In addition to mudflow phenomena on the southern and north-eastern slopes of the Greater Caucasus, landslides are widespread, which also cause significant damage to the national economy.

Points of soil quality of mountain regions of Azerbaijan (According to Mamedov G.Sh., 2000)

Analyzing the above, it is necessary to state the fact that with the development of erosion processes, the republic annually loses tens of thousands of tons of agricultural products, and therefore timely implementation of anti-erosion measures and its integrated application is considered a necessary problem that meets the modern requirements of the day.