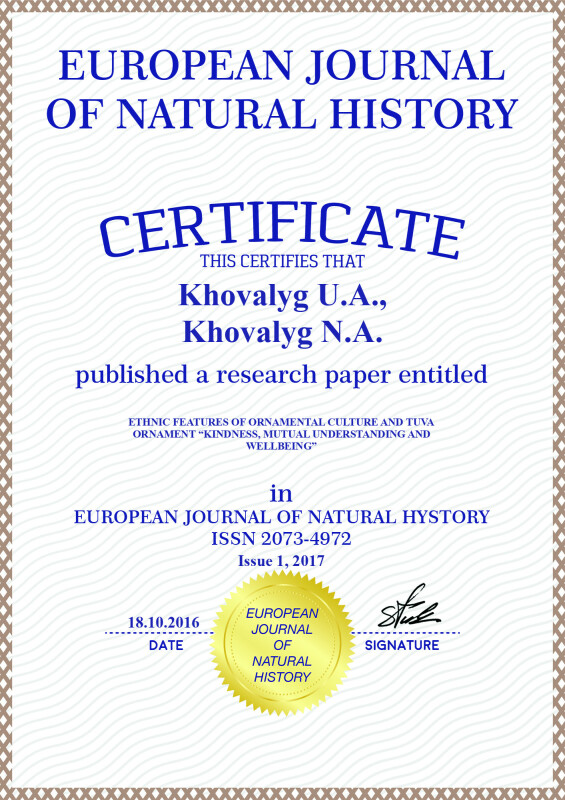 Each people are highly honored by traditions of the edge and love the culture – culture of the ancestors. The ornament is a special type of art creativity. In historical monuments of Tuva motives of patterns were known and they are connected with ancient cultures of a steppe zone. It is possible to distinguish system of symbols of color and system of Buddhist signs from the symbols used in national clothes of Tuvinians. At the head of system of flowers in the Tuva culture it is located white color, “mother color” – the most sacred and desired symbol of purity, nobility, wellbeing, wealth which has got into Tuva together with the Buddhism a Lamaism. The Tuva ornament is in essence presented in the form of the sign “eight”, that is an infinity sign. At an ornament is not present I have begun, the end, and it suggests a certain philosophical idea “about eternal values of national traditions”. The things decorated with an ornament from regular pieces of house utensils turned into objects of ritual traditions, for example, became charms. The Tuva ornament created by us will bear in itself kindness, mutual understanding and wellbeing. Motives to serve as a charm of family rest in the created ornament.

Ornament – one of the most ancient types of graphic activities of the person bearing in itself symbolical and magic sense, significance, semantic function. Researchers of an ornament consider that it has arisen already during a verkhnepaleolitichesky era (15–10 thousand years BC). Differentiate four types of functions: the most ancient – magic, decorative – ornament, information – data, mental – emotional. The ornament is conventional signs, symbols by means of which the person expresses the relation to natural phenomena. Studying of an ornament – the special section of the art letter which knowledge is necessary for all. The ornament is very ancient, but also now I have not lost the relevance. If to pass around the city either what – or to the village can see an ornament on houses [1–7].

Purpose: Studying of history and features of ornaments in the fine arts. Preserving the most valuable property of cultural heritage of Tuvinians. The ornament purpose – to decorate, something.

1) To consider the place of a decor and ornament in art.

2) Studying of the main features of the Tuva ornament.

Materials and methods of research. Terminological. Matching and studying of materials on ornaments in the fine arts.

Results of research and their discussion. Knowledge of culture of heritage of the people.

Tuva is a unique corner of the planet where are fancifully combined also highlands with the Alpine meadows, both a mighty Siberian taiga, and the southern sandy deserts where herds of reindeers wander. It is an ancestral home of such most ancient people as Scythians, Turkic peoples whose barrows, stone sculptures and steles with texts are scattered on all its territory. On products from various materials the motive of an interlacing often meets (in Tuva “olchy udaizen”).

The Tuva ornament is in essence “eight”, that is an infinity sign. At an ornament is not present I have begun, it suggests a certain philosophical idea of eternal values of national traditions”.

The ornament created by us will bear in itself kindness, mutual understanding and wellbeing. The product decorated with such ornament will symbolize a strong and healthy family where the mother Priroda and the person – her child will be the main members of this family. Keeping traditions, women’s mittens, a set for the girl have been made: the bag and mittens, have created new motive of an ornament, have made a badge emblem of the Skilled worker circle with use of an ornament. For a preservation of peace on the earth a all of us have to honor to remember and keep, transferring from generation to generation traditions of the people, to respect traditions of those people which live with us nearby closely conduct economy, live in one territory, heat and kindness wishing each other. In a color system of the Tuva ornament red, blue, blue, green, brown and yellow paints prevail. The highest position is held by white food, cattle of white color, a white yurta, the person with white soul, white clothes. Buddhist signs matter, namely: Happiness thread – endless love and compassion to all living beings; The Vessel – long life; The Swastika – durability; Gold fishes – harmony; The Lotus – purity; Vadzhra – a spiritual method; Chintamani – fulfillment of desires. As a charm of inviolability of the family center considered a typical central aizyaitsion diamond-shaped pattern of “khan-karak” (in Tuva) which quilted a high collar.

The things decorated with an ornament from usual pieces of house utensils turned into objects of ritual traditions, for example, became charms. Motives can serve in the ornament created by us as a charm of family rest.

The work is submitted to the International Scientific Conference «Russias cultural heritage and the modern world», Great Britain (London), October, 15–22, 2016, came to the editorial office оn 14.08.2016.