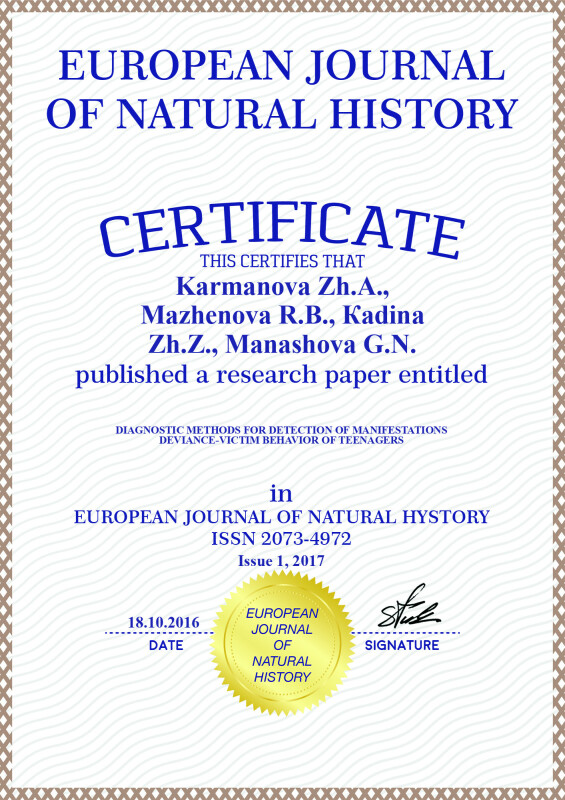 DIAGNOSTIC METHODS FOR DETECTION OF MANIFESTATIONS DEVIANCE-VICTIM BEHAVIOR OF TEENAGERS

Article in PDF
191 KB
The article is devoted to the use of complex methods of detecting the level of manifestation deviance-victimization of student conduct. To diagnose the level of deviant behaviour and victimization in adolescents were used different methodologies. At each stage, depending on the tasks carried out a systematic observation of adolescents in the educational process, allowing to identify the presence of knowledge, abilities to solve tasks, trends in behavior.
deviant behavior
victim behavior
students
diagnostics
education
teenager
1. Licko A.E. Pataharakterologichesky diagnostic questionnaire for adolescents and experience of its practical use. – M.: NIIPP them. Behterova, 2006. – 96 p.
2. Questionnaire propensity for deviant behavior (scale Y.V. Popov – N. Ivanova). – http://psihu.net/library/file1046.
3. Methods of diagnosing the level of aggressiveness of Bass-Darky. – http://azps.ru/tests/tests_agression.html.
4. Research Methodology propensity for victim behavior designed O.O. Andronikova. – http://self-injury.at.ua/index/0-12.
5. The method of “unfinished thesis”. – http://philologist.z83.ru/linktests/242-l-r.
6. The method of “Locus of control”. – http://psyline.retter.ru/lokus/start.php.

In recent years a number of reasons, including because of the instability of society and the intense social change, increased negative trends, increased demands for self-determination and personal stability and provoking her deviant and victim behavior, and often degradation and self-destruction. The importance of the problem of deviant and victim behavior of teenagers due to the worsening tendency to increase the number of designated contingent of pupils with behavioral problems and becoming victims of crime. Therefore, the issue of prevention of deviant-victim behavior of teenagers – one of the main directions of work of educational institutions.

The purpose of our study is to analyze the diagnostic methods to identify manifestations of deviant-victim behavior of adolescents.

As methods of research was the study of regulatory, scientific, psychological and pedagogical, methodological literature; analysis and generalization of the advanced pedagogical experience; observation, interview, questionnaire, testing, pedagogical experiment, methods of quantitative and qualitative processing of the material.

By the selection of the complex methods that detect the level of manifestation of deviant-victim behavior of students, we proceeded from the system-activity approach, which involves the examination of processes and phenomena in the system and the relationship, but a manifestation of a quality business.

To diagnose the level of manifestation of deviant behavior among adolescents following methods were used: patoharakterologicheskie diagnostic questionnaire A.E. Licko [1]; Questionnaire propensity for deviant behavior (scale Y.V. Popov – N. Ivanova) [2], the level of aggressiveness of diagnostic technique Bass-Darky [3]. In the diagnosis of the level of manifestation of victim – methodology: research methodology propensity for victim behavior designed O.O. Andronikova [4], a technique of “unfinished thesis” [5], a technique of “Locus of Control” [6], the method of determining the level of formation evaluation skills and safe behavior in various situations.

Patoharakterologicheskie diagnostic questionnaire A.E. Licko. The questionnaire is designed to determine in adolescence (14–18 years) with type nature psychopathy, psychopathic developments, as well as the accentuation of character, it is an extreme variant of the norm. The questionnaire consists of phrases containing 25 themes. Among the topics included evaluation of its own vital functions, related to the family and others, and some abstract categories. The kit includes the phrase, reflecting the ratio of different types of character to a number of problems in life, and indifferent phrases. The subject is offered the freedom to choose one or more (up to three) answers to each topic or failure. The proposed questionnaire alphabetic code symbols correspond to the scores in favor of the following types: T – hyperthymic, D – cycloidal, L – labile, A – asthenoneurotic, On – the sensitive, P – psychasthenic, W – schizoid, e-epileptoid, I – hysteroid H – unstable, K – nonformny. To calculate the points in favor of each type you need to draw a graph. After this type of diagnosis of psychopathy and accentuation of character by using certain rules. It is the personal questionnaire.

Questionnaire propensity for deviant behavior (scale Y.V. Popov – N. Ivanova). The questionnaire is designed for teenagers aged 13 to 18 years. Testing is carried out individually or with a group.

The main objective of the SOP – identifying tendency of adolescents to certain deviations in behavior. Identification of risk social exclusion (scale Y.V. Popov – N. Ivanova) is possible if using the PDO defined gipertivny, labile, the sensitive, schizoid, epileptoid, istoreidny, unstable types of character accentuations. If diagnosed mixed type, that are oriented to the type for which scored the highest number of points. If the diagnosis of mixed type in relation to each of the selected types of the same number of points, then use a scale of one where revealed signs of maladjustment. The presence of at least one of the signs says the risk of maladjustment, the presence of two or more features making this a high risk.

In accordance with these rules is diagnosed type of character accentuation. Methods of diagnosing the propensity to deviant behavior contains the scale:

1. The scale of the installation on the socio – desirable answers. High scores indicate that adolescents do not meet socially desirable plants. Low indicator that a person seeks social attitudes.

3. Scale propensity to additive behavior. High scores indicate that there is a predisposition to drug use. Low contrast, indicates that the risk of substance use is negligible.

7. Scale propensity to delinquency behavior. A high indicates that the person is able to commit unlawful conduct. Low rate and says the least probability of manifestation of this behavior.

Some items of the questionnaire are included simultaneously in several scales.

The study proposes the subjects read statements and decide whether these statements are true in relation to them. If true, then the answers on the form next to the number corresponding to the statement on the small box labeled “Yes” to put a cross or a tick. If they are incorrect, then place a cross or tick the box under the designation “No”. The results of male and female variants are processed using different keys, but the scoring procedure is the same. Each account, in accordance with certain embodiments, the key is assigned one point. Then, for each scale total score is calculated. This total score is compared to the estimated results on the scales, which are summarized in the table below. Scorecard makes it possible to determine the tendency of teenagers to a particular deviation.

By creating your questionnaire, differentiating aggression and hostility, A. and A. Bass Darky identified the following types of reactions:

1. Physical aggression – the use of physical force against another person.

2. Indirect aggression – aggression, in a roundabout way directed at another person, or anyone not directed.

4. Negativism – opposition demeanor of passive resistance to active struggle against the established customs and laws.

5. Offense – envy and hatred of others for real and imaginary action.

6. Suspicion – ranging from distrust and caution in relation to the people to the belief that other people are planning and are harmful.

7. Verbal aggression – an expression of negative feelings like through the form (scream, yelp), and through the content of the verbal responses (curses, threats).

8. Feelings of guilt – a possible conviction of the subject that he is a bad person, that goes wrong, and they perceived remorse.

In compiling the questionnaire the authors used the following principles:

– The question may refer to only one form of aggression;

– Questions are formulated in such a way as to maximize the effect of weakening public approval to answer the question.

The questionnaire consists of 75 statements that are subject answers “yes” or “no”. The survey reveals the following forms of aggressive and hostile reactions:

In addition, it stands eighth – remorse, guilt. Answers to questions of this scale express a moderating influence on the manifestation of guilt forms of behavior that are normally forbidden norms of society. This paragraph expresses the degree of belief of the subject that he is a poor man who does wrong things, the presence of his remorse.

Processing questionnaire Bass-Darky is done by indexing the various forms of aggressive and hostile reactions.

Research Methodology propensity for victim behavior designed O.O. Andronikova. Research Methodology victim behavior is a standardized test, questionnaire designed to measure the susceptibility of adolescents to the implementation of various forms of victim behavior. The object of the application methods are social and personal settings. Test questionnaire is a set of specialized psycho scales designed to measure the predisposition to the implementation of certain forms of victim behavior. Designed for inspection of teenage and youthful age. The questionnaire can be used as a self-diagnostics instruments, and in combination with other techniques aimed at the study of the adolescent’s personality.

“Unfinished thesis” Methodology. Students are invited to a few minutes to complete the phrase. As a result of this technique can assess knowledge, skills victim behavior of adolescents.

Methodology “locus of control”. The technique allows to determine what holds people responsible for the events in their lives. People tend to see the source control their lives or predominantly in the environment or in itself.

Quiz – questionnaire localization of subjective control (SLC) S.R. Panteleyev and V.V. Stolin is designed to measure the locus of control in adolescents.

The questionnaire contains 32 points (26 employees and 6 camouflage), built on the principle of forced choice of one of the two statements, and forms a one-dimensional scale, which gives the composite index locus of control.

Methods of assessing the determination of the level of formation of skills and safe behavior in various situations. The purpose of this methodology is to analyze the knowledge and skills out of dangerous situations existing in adolescents.

At each stage, depending on the tasks carried out systematic monitoring of adolescents in the educational process, which revealed the presence of knowledge and skills to solve tasks, trends in behavior. An important place was given to the group and individual interviews, questionnaires, self-awareness actions and deeds, the method of self-esteem.